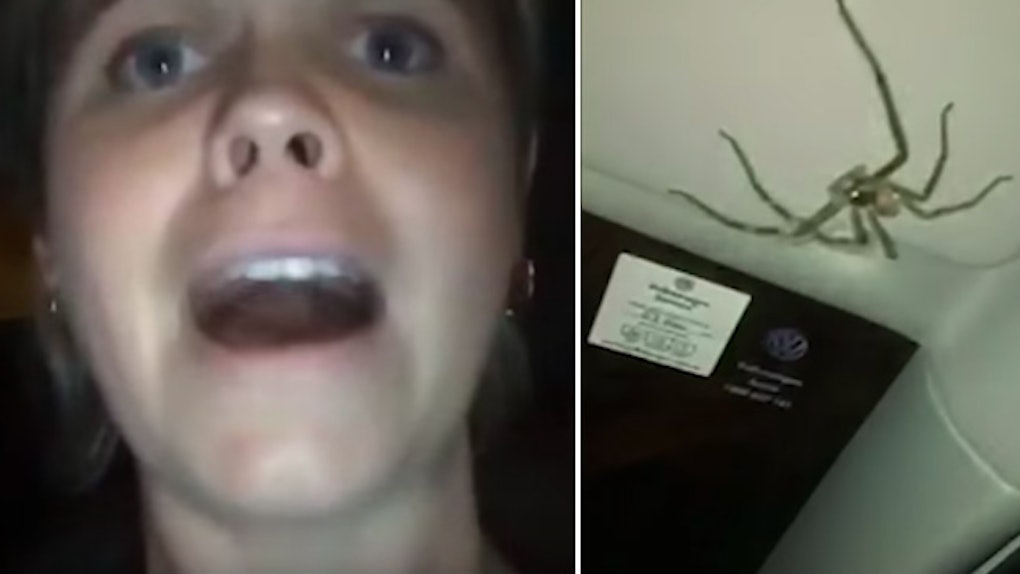 Driving can sometimes be dangerous — with traffic, slick winter roads, and preoccupied drivers running stop signs. What would you do if "giant spider trapped inside of your car" was added to the list of road hazards? One woman in Australia had to find out the hard way. Check out this video of a huge spider in a woman's car, and you might just find yourself being grateful that rush-hour traffic is your worst driving gripe.

Bianca Merrick was driving home from work in Coffs Harbour, Australia (where she lives) on Friday, Nov. 17 when she noticed that she wasn't making the drive alone, Mashable reports. In a video posted to YouTube on Nov. 19, Merrick recorded her reaction when she discovered her multi-legged co-pilot just chillin' on the passenger-side visor. If creepy crawlers aren't really your thing, then prepare yourself before you watch this video... because this spider is huge.

Merrick's first reaction was to ask, "What the f**k?", as she sported a terrified expression on her face (naturally). Then, Merrick continued the 20-minute drive home, because she wasn't sure how'd she get the spider out of the car if she stopped. She called it "the longest 20 minutes of my life," according to Storyful.

Watch the nightmare come to life.

Honestly, her reaction seems much more held-together than I would have thought for dealing with a spider of that size. When she finally arrived home, Merrick got out of the car as carefully as possible, locked her car doors, and then went to sleep as if the whole thing never happened. When she went to take care of it the next day, armed with bug spray and a broom, there was no spider to be found.

Um, so Merrick is just driving around under the pretense that the spider simply vanished? Yeah, nope — not happening.

As soon as Twitter got a hold of this video, alternate suggestions for dealing with the ride-mooching Australian Arthropod came rolling in. Defeating the spider by way of demolishing the car was a highly-used suggestion.

I'll take the undead over a very-much alive spider every damn time.

If the spider could escape this kind of blaze, it deserves nothing but my utmost respect.

Fire really seems to be the way to go.

Some people just couldn't even with it.

From the consensus on Twitter, the only options when a spider invades your car are either burning the vehicle or sending it on its merry way right off of a cliff. Now, I'm not sure how practical those suggestions are, but they seem pretty logical to my spider-fearing self.

Thankfully, Merrick was a little more level-headed about the the situation. Seriously, though, I'll never understand how Merrick got any sleep that night or why she even attempted to unlock her car again the next morning. I'm wary of getting into my (or any) car again after watching that ordeal.

It's safe to say that Australia is definitely living up to its home-to-many-terrifying-and-possibly-deadly-insects reputation. Maybe that's why Merrick was able to handle it with a bit more sanity than one would expect — perhaps she has a higher fear threshold.

So, next time you're stuck in a bit of traffic, just be thankful that you're not being held hostage in your own car by a terrifying spider. If it does happen, though, maybe hope for the temperament of an Australian, because apparently they handle it pretty well.