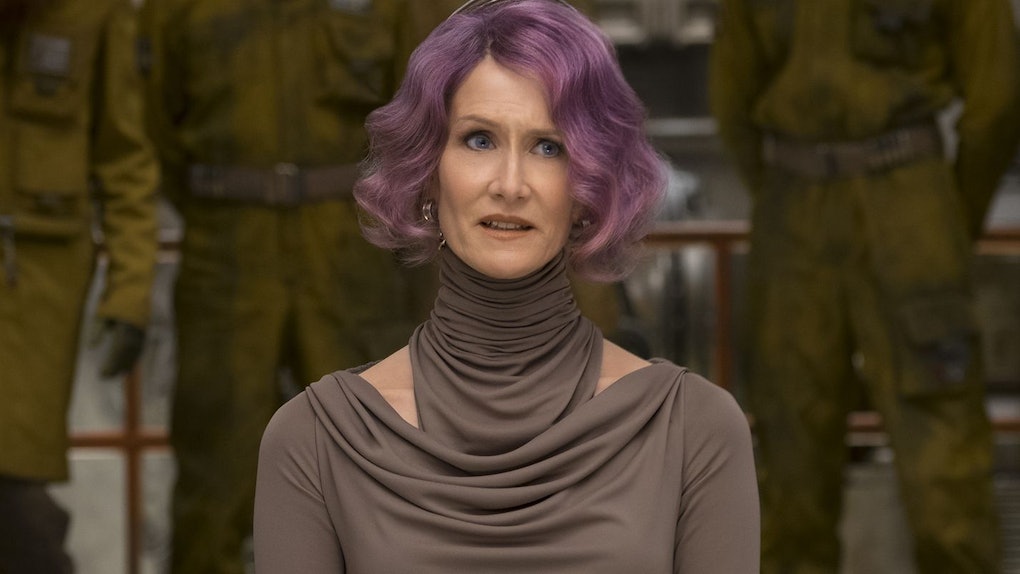 There are several aspects of Star Wars: The Last Jedi that have been controversial, from Luke's characterization, to the amount of humor in the film, to whether or not porgs should be dinner. But one of the more accidental controversies came from Poe Dameron's reaction to Leia's replacement, Vice Admiral Holdo, when she stepped up to lead the Resistance. She didn't "look" the way he expected, in lavender curls and a long gown. But Vice Admiral Holdo's outfit in The Last Jedi actually has a deeper meaning beyond just a leader who embraces her femininity, even as she leads her flock to a place where she hopes they'll be safe.

The worst part about the controversy of Poe's reactions to Vice Admiral Holdo is that if the Vice Admiral's role had been played by a man, none of this would have been a controversy. Poe's refusal to simply take orders, and resulting mutiny aboard the resistance lead ship would have been about his hot-headed behavior. It would have focused on Leia's line about him needing to grow up, and highlighted his rebellious nature, and his frustration with not being able to "jump in a ship and blow something out of the sky."

But because the show worked so hard to ensure diverse casting, the Vice Admiral was played by Laura Dern, presenting as very feminine. Poe's reaction then got a sticky flavor coating of unconscious sexism added to the mix, one that was unavoidably obvious to the women in the audience, but had clearly been missed by the room full of men making the film.

But for some fans, the question was unavoidable: Why *did* Holdo present herself that way? There's nothing wrong with presenting as feminine, but because Star Wars has not made gender presentation part of the language of character tropes in the films before now, it was rather jarring to see an authority figure dressed in a manner that we in the audience have been taught over the course of eight films to mentally translate as "romantic object for men."

It turns out that the Star Wars: The Last Jedi: Visual Dictionary has an interesting answer to this question. This companion book to the film fills in tons of little character details in the film that might not have fully added up for viewers during their screening.

Some of them are things fans already put together, like "tracking the hyperdrive through lightspeed" was a technology the Empire was researching during Rogue One. Others are things fans would never have thought of, but make sense, like the Caretakers on Ahch-To (which are a species called "Lanais") and the Porgs are actually distantly related. It's a small island on a small planet, they probably evolved from the same ancestor an epoch back or so.

But when it comes to Admiral Holdo, her refusal to wear a uniform comes from the independent spirit of her people, the Gatalentans. They hail from Gatalenta, a planet that was part of the Republic before the Galactic Civil War began. They were faithful to the Imperial Senate, and Holdo herself was part of the Apprentice Legislature, which was an Imperial organization on Coruscant for "youth in politics." (This is where she and Leia originally met.)

That's where Holdo's outfit comes in. She dresses like that as a sign of faithfulness to her people, their religion, and their customs. Her rise through the ranks despite her quirky, independent spirit is a testament to how her tranquil nature keeps her cool in battle.

Oh, and she's not a natural lavender. But who among us are, anyway? As they say in the galaxy, "Maybe she's born with it, maybe it's chromomites."

More like this
These Memes About 'My Octopus Teacher's 2021 Oscars Win Are Completely Wild
By Ani Bundel
TikTok's #NotTheMainCharacter Trend Shows The Supporting Role You Connect With Most
By Marisa Casciano
Camila Cabello's 'Cinderella': Release Date, Cast, Trailer, & More
By Abby Monteil
Stay up to date