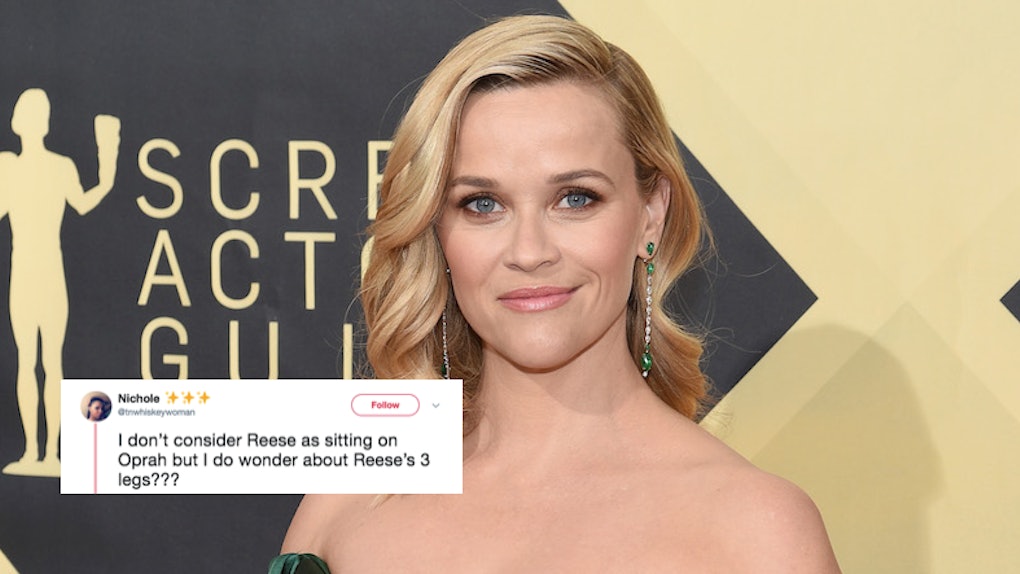 When the internet is good, it is so good, you guys. Vanity Fair's 2018 Hollywood Issue is finally out, which means that everyone gets to see who's been featured on the cover. This year, celebs like Nicole Kidman, Gal Gadot, and Tom Hanks are lucky enough to have been selected, but there's two celebs in particular who are on the cover that are making some serious waves on social media, because Photoshop has utterly failed them. A Photoshop fail of Reese Witherspoon & Oprah appeared on Vanity Fair's cover and it is PURE GOLD. Take whatever you're thinking, and multiply it by a hundred, because there's not just one mistake. There's multiple mistakes, and Twitter is all over it.

Shot by the queen of photography Annie Leibovitz, the Hollywood Issue of Vanity Fair is, on the surface, all that you could dream it would be: beautiful and notable celebrities dressed to the nines, all casually looking into the camera as if to say, "Why yes, I made five million dollars just while sitting in this chair, what have you done today?" Kidding! But seriously. And, at first glance, you see the photo and think at how beautiful everyone looks, and how elegant the whole setup is — the glitz and the glamour is so in-your-face it hurts, kind of like getting punched (but with diamonds instead of a fist):

Perfection! Lovely! Gold stars for everyone!

Maybe gold stars for everyone but the editor behind the photo, because upon closer inspection, you'll see that there are so. many. mistakes.

Take, for instance, Oprah's many, many hands:

Count 'em, everyone. There's one resting on her hip, one that's resting on her lap, and one that is delicately grasping Reese Witherspoon's waist. People on Twitter obviously had jokes:

Gold. All of this is just gold.

Look, I totally get a little Photoshop flub. It happens! Sometimes when you're looking over a photo a zillion times, some details are just missed. We get it. Vanity Fair editor, you are forgiven for this error.

Reese Witherspoon and her extra leg:

I'm sorry, first Oprah has too many hands, and now Reese has too many legs? Why can't everyone just get the correct ratio of arms and legs? WHY IS THIS SO DIFFICULT?

Some people were quick to point out that maybe that "third leg" was really just the interior fabric to Reese's gown. But NOPE, Twitter came to the defense, because no matter which way you slice it, Photoshop is definitely the culprit to this wonky image:

Seriously, go ahead and try to cross your leg like that. Kind of impossible.

Twitter was seriously confused with all of these extra limbs:

Then, the QUEEN HERSELF responded to the three-legged debate:

Someone also pointed out that the always-glowing Claire Foy is posed in a way that looks mighty uncomfortable to the average human:

And, my personal favorite: People pointed out that the text laid out right next to one of the Photoshop mistakes is hilariously on point, noting that there's "one retiring editor":

Just when I thought I couldn't love Twitter any more.

I think we should applaud the Vanity Fair cover, though, for getting one thing right: Representing actors and actresses who have stood behind the #MeToo movement, as well as commending the women who are taking charge and the men who are standing behind them. In the Hollywood issue, Vanity Fair had this to say about their cover stars:

The films and TV shows represented by the actors in this year’s Hollywood Portfolio—which for the first time offers a behind-the-scenes look at the shoot—took the #MeToo movement in stride, offering strong women in leading roles, as well as strong men supporting them.

OK, Vanity Fair. We celebrate and support these people, too — regardless of how many limbs they have.