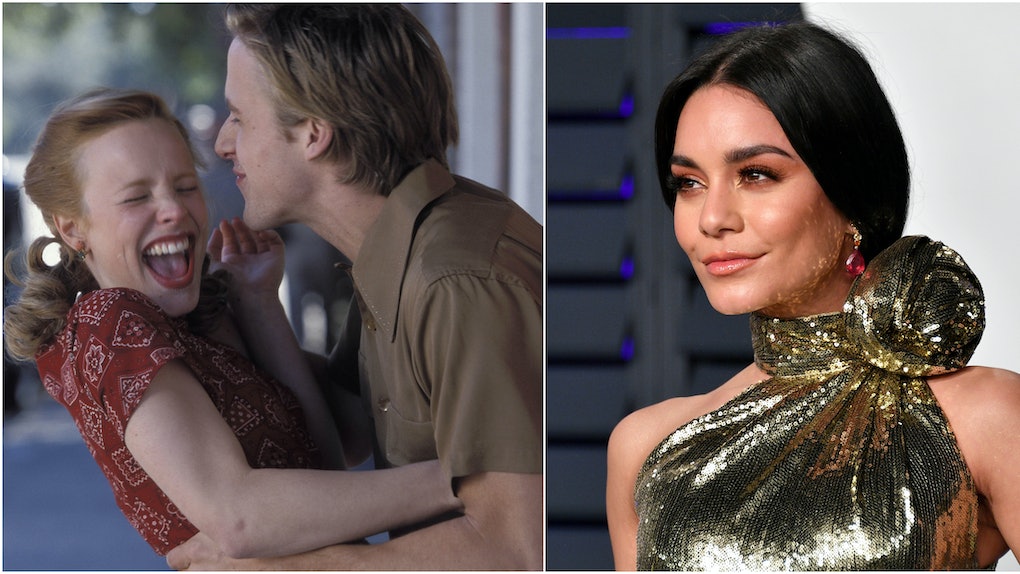 Vanessa Hudgens Will Play Allie In 'The Notebook' Musical Reading

Vanessa Hudgens will always go down in musical movie history as High School Musical's Gabriella Montez, but if you've already exhausted singing as many of her solos as possible, she has another iconic role linked to music in her future. Don't count on seeing her on Broadway just yet, but Vanessa Hudgens will play Allie in The Notebook musical reading. Before you start planning a 1940s-themed outfit to see her in action, let's break down exactly what this means.

ICYMI, singer-songwriter Ingrid Michaelson has written the music and lyrics for a stage musical adaptation of The Notebook, while This Is Us writer Bekah Brunstetter has been working on the musical's script. While the project is officially based on Nicholas Sparks' novel, its 2004 movie adaptation starred Rachel McAdams and Ryan Gosling as teenage sweethearts Allie and Noah, who are first drawn apart because of Allie's parents' disapproval and then kept separate for years during and after World War II. Chances are that you caught the movie on cable yet again last weekend and inevitably cried at Noah's proclamation of love for the umpteenth time. Same.

More than five months after the musical's creative forces were announced, Entertainment Weekly reports that Broadway alum Hudgens will play "middle" Allie, or the equivalent of McAdams' Allie, in the show's first staged reading during Vassar and New York Stage & Film's Powerhouse Theater season. According to its website, this annual event entails staged and workshop productions of new plays and musicals at Vassar College in Poughkeepsie, New York. Basically, it's heaven for hardcore theater fans who want to know as much as possible about any and all stage work.

The American Association of Community Theatre defines a reading as "a presentation of a new play for or by the author, using scripts...with no movement or stage business." The road to making a Broadway musical is long and bumpy, and a reading of a show usually means that its creative team is just gauging how its current state flows. Cast members attached to an early reading also aren't guaranteed to stay with the production throughout its various stages, just as a musical isn't immediately destined for Broadway. Fans likely have a long wait to see if Hudgens, who also starred in Grease: Live, Rent: Live, and Broadway's Gigi, will actually reach a New York City stage in this Notebook role.

Hudgens will star in the one-time reading at 3 p.m. ET on Sunday, June 23, at Vassar's Martel Theater. Powerhouse Theater subscribers can reserve seats at the reading from June 14 through 16, while the general public can make reservations on June 18. If you're a bird, I'm a bird who'll try to fly to the Hudson Valley ASAP for a ticket.

Rent's Michael Greif will direct the reading, while Hudgens will join several theater veterans in the cast, including Frozen's Jelani Alladin and Tony Award nominee Hailey Kilgore. In a previous statement, Michaelson said about the project:

I have loved the movie and the story for so many years now that the idea of turning it into a musical overwhelmed me. The concept of unending devotion and love wrapped up in memory and family is something very close to my own personal life… I cannot wait for the world to hear these characters come to life in a musical way.

The musical version of The Notebook may be in early development, but Hudgens' involvement has me hoping that this show will eventually be soaring and flying right to Broadway. Now, excuse me while I watch Noah and Allie's montage of summer loving all over again.

More like this
What Do BTS' "Film Out" Lyrics Mean In English? They're About A Past Relationship
By Michele Mendez
Here's How To Stream BTS' 2021 'Bang Bang Con' So You Don't Miss The Concert
By Cianna Garrison
Taylor Swift's 'Fearless (Taylor's Version)' Lyric Changes Are Small, But Meaningful
By Michele Mendez
Stay up to date