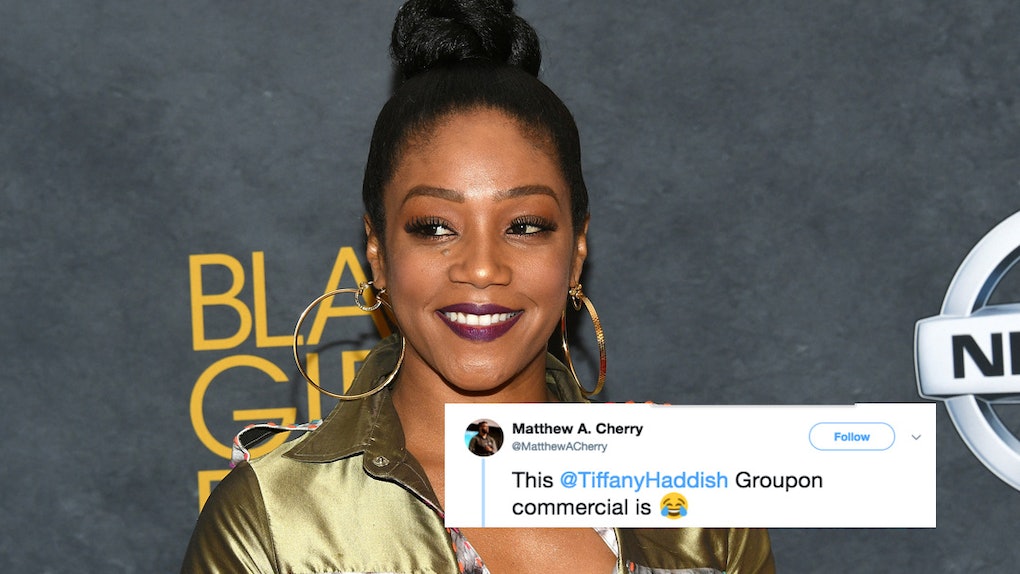 Tweets About Tiffany Haddish's Groupon Commercial Are Totally Cheering Her On

Super Bowl 2018 is finally happening, and we’re all ready for some sports! The things, with the ball and the points... OK, I’ll be honest, we all know some of us are only here for the ads. Everyone knows the Super Bowl is when big companies really turn it out on their ads, putting out the funniest, most creative, most star-studded 30-second spots. And the one I’ve been looking forward to most is Tiffany Haddish’s — because we know that A) the girl loves her some Groupon and B) she'll tell you so in the most hilarious way. And if the tweets about Tiffany Haddish’s Groupon commercial are to be believed, I’m not alone in thinking it's funny.

Anyone who has paid attention to Tiffany Haddish’s interviews or career at all knows that the Girl's Trip star seriously, seriously loves the group-coupon service. In a recent interview with Entertainment Weekly, the actress and comedian said that she basically won't shut up about it. "If you met any of my friends they would tell you, 'Tiffany’s a Groupon junkie, all she talks about is Groupon,'" she joked. She continued,

Anytime they want to hang out and have a girls night, I’m like, 'Cool, I got a Groupon to this really cool restaurant. I’ve never been there before, but I think it will be great and we’ll only have to spend $50 for all of us to eat!' They’re like, 'Shut the f*ck up with the Groupon. We got money, Tiffany.'

So clearly, the ad is a natural fit for her. If you missed it on the TV, you can check it out below:

Social media definitely thought it was a home run.

(Am I mixing up my sports metaphors? Just roll with it.)

Seriously, though, I really can't overstate how much Haddish loves Groupon, by her own account. One of the highlights of my 2017 was watching her tell Jimmy Kimmel about — accidentally — getting Will Smith and Jada Pinkett-Smith to go on a Groupon swamp tour with her while filming Girl's Trip. She recounted the hilariously weird experience of taking the Fresh Prince on a Groupon tour:

Jada said, 'What are you doing tomorrow, we're off work, what are you going tomorrow?' I said, 'Well, I got me a Groupon to go on this swamp tour, so that's what I'm doing.' ... She said, 'Well, maybe Will and I will go with you.' I'm like, yeah right.

Except the two actually showed — and then when they arrived for the tour, were just, very confused by the enormous crowd. Haddish described the scene:

[We pull up and] there’s a lot of white people on the swamp. And it say, ‘Cajun Swamp Tour.’ And Jada’s looking, and she goes, ‘Tiffany, what is going on here? Why are there so many people?’ And I said, ‘Jada, they probably all got Groupons.’ And she said, ‘Tiffany… what the f*ck is a Groupon??’

And I said, ‘Jada, what do you think a Groupon is?’ She said, ‘I thought it meant you had a boat that you could take a group of people on.’

And it doesn't end there. Seriously, the whole thing is worth a watch. Come for the Groupon explanation, stay for the mental image of Will Smith fascinated by being inside a rental car.

So, is this Super Bowl ad the beginning of a long and glorious symbiotic relationship between Tiffany Haddish and Groupon? Man, I really, really hope so. I mean, let's just let Tiffany Haddish talk about Groupon for 90 minutes as her next movie. You know I'd watch it.

More like this
These Tweets About Beyoncé On Netflix's 'Selena: The Series' Are Too Much
By Dylan Kickham
These Tweets About The 2021 Billboard Music Award Nominations Are All Over The Place
By Michele Mendez
These BTS Suga Quotes For Instagram Captions Are Pure Poetry
By Brandy Robidoux
Stay up to date