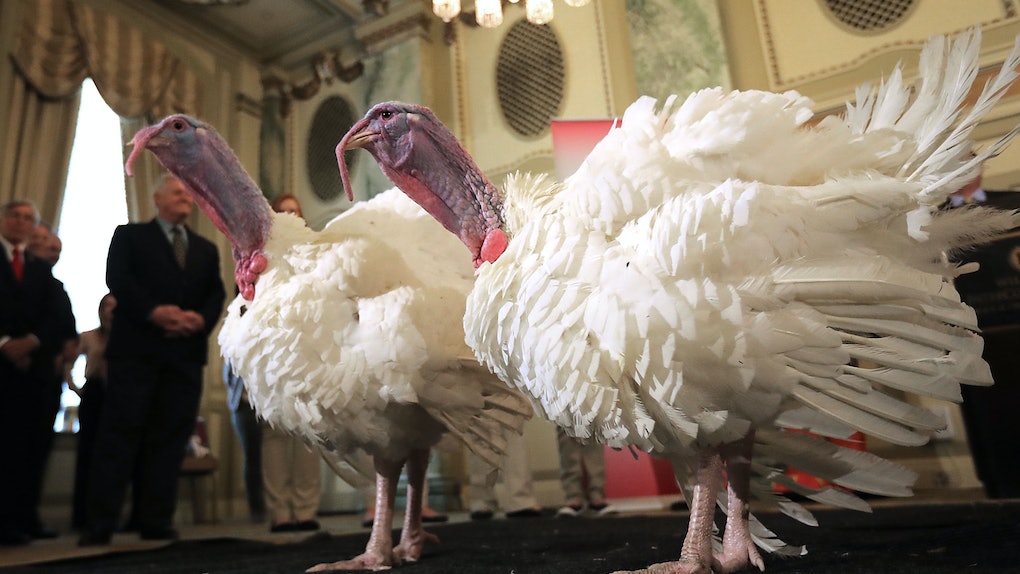 Tweets About The White House Turkey Pardon Are Hilariously Brutal

Every year, one lucky turkey is publicly pardoned by the White House right before Thanksgiving festivities begin. In the spirit of this time-honored tradition, the Trump administration tweeted out a poll asking civilians to choose one turkey for pardoning day. The responses were... erm... probably not quite what Trump's team was looking for. Tweets about the White House turkey pardon are hilariously brutal, and probably the best Thanksgiving gift any of us could ask for.

On Nov. 20, the Trump administration decided to do a little last-minute crowdsourcing on Twitter, asking,

Which turkey should be pardoned during the National Thanksgiving Turkey Pardoning Ceremony?

After the pardoning, Drumstick and Wishbone will join last year’s turkeys, Tater and Tot, at Virginia Tech’s “Gobblers Rest” exhibit.

For all you animal lovers out there, it's worth noting that both Wishbone and Drumstick will be making it out of the ceremony, which will be held on Nov. 21, alive. The social media team just wanted to know which of the turkeys should be shown during the live National Thanksgiving Turkey presentation.

Well, ask and you shall receive. Plenty of people had thoughts about the turkey pardoning — though very few had anything to do with Drumstick and Wishbone themselves.

Many took the opportunity to bring up Robert Mueller's investigation into the Trump administration.

Others thought Drumstick and Wishbone might chose to opt out of the pardoning ceremony altogether.

And some used the turkeys as a simple jumping off point to burn the president.

Also just a ton of snaps for any bird-related humor.

Possibly the best thing to come out of this whole pardoning day? Watching Trump interact with the turkey. You see, our president doesn't exactly have the best track record with birds.

Here he is attempting to pose with an eagle for his TIME photo shoot in 2015. It is painfully awkward, and I feel very bad for the eagle.

Turns out, Trump was really into the notion of posing with a bird — until it actually happened.

“Mr. Trump liked that idea,” Martin Schoeller, the photographer for the shoot, told TIME. “I thought he might be open to it considering he’s a man who loves attention. He likes controversy, and he likes to be in the spotlight.”

Buuuut the eagle wasn't super into the whole thing.

“It’s hard to plan what animals will do,” Jonathan Wood, the eagle's handler, added. “There’s not much training you can do with a wild bird and Mr. Trump was a little hesitant holding the bird, so it was very tricky to get the bird to [stay] on his hand.”

Maybe Trump will have better luck with Drumstick and Wishbone?

According to Presidentialturkey.com, prospective pardoned turkeys are given “increased interaction with people so that, if chosen, any of the birds will be prepared for his role at the White House ceremony.” Trump will pose with the chosen turkey during the ceremony, and offer up a speech that "reflects on our nation’s rich Thanksgiving traditions and wishes American families a safe and healthy holiday," according to a press release from the White House.

Meanwhile — Trump aside — Drumstick and Wishbone are currently living it up in Washington D.C. right now. They're staying at the Willard Intercontinental Hotel, where rooms reportedly cost between $200 to $3,500 per night, according to The Hill.

Once the birds are pardoned, they'll get the chance to live a quiet, restful life at Virginia Tech. In a statement released last week, the White House explained,

After the pardoning, the turkeys will join last year's turkeys at Virginia Tech's "Gobblers Rest" exhibit, where students and veterinarians care for the turkeys, and the public can visit and learn about the university's teaching, research and outreach programs in animal and poultry sciences and veterinary medicine.

Here's hoping Wishbone and Drumstick don't have to deal with too many awkward Trump interactions before making their way to Virginia. We're all rooting for them.