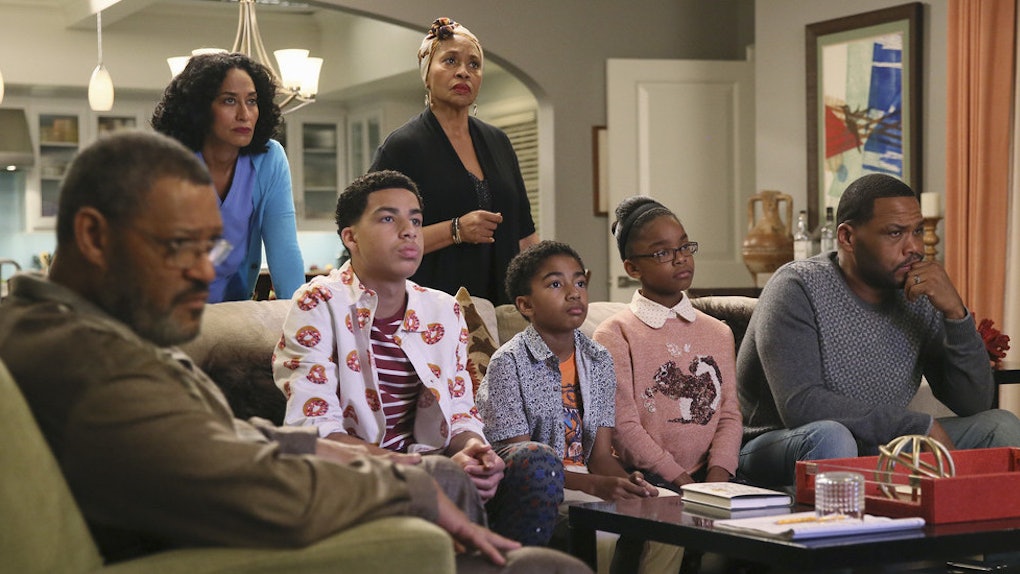 In its four seasons on the air, Black-ish has made a name for itself as one of the most daring network sitcoms in a long time. The show has tackled hot-button social issues such as police brutality, gun control, the N-word, and Trump's election, always presenting and dissecting each unique viewpoint surrounding these controversial topics. But apparently, the show won't be addressing one huge, topical controversy that seems like it would be right up the sitcom's alley — ABC pulled a Black-ish episode about athletes kneeling during the national anthem from its schedule, Variety has learned, and fans of the show are not happy about the decision.

The pulled episode, which was entitled "Please, Baby, Please," was originally slated to air on Feb. 27, but a few days before that date ABC announced that the new episode would be replaced by a rerun. Now, we know what that episode was going to be about, and why it got canceled. Apparently, the episode featured Dre (Anthony Anderson) improvising a bedtime story to put his infant son to sleep, and that story begins to reflect Dre's concerns about the current state of the country. The specific tidbit that sticks out is that the episode included an argument between Dre and his oldest son Junior (Marcus Scribner) over whether athletes should kneel during the national anthem or not.

A spokesperson for ABC told Variety that the episode was shelved over "creative differences we were unable to resolve." Showrunner Kenya Barris echoed the network's sentiments, stating that he agreed it was best to pull the show from air after creative differences with ABC:

Given our creative differences, neither ABC nor I were happy with the direction of the episode and mutually agreed not to air it. Black-ish is a show that has spoken to all different types of people and brought them closer as a community and I’m so proud of the series.

The episode is currently on an indefinite hold, with no plans to ever air it.

Although Kenya Barris agreed to shelve the episode, it is important to note that he says he did so because of creative differences with ABC. That makes it sound like the network was asking the Black-ish team to retool the show's discussion around athletes kneeling during the national anthem, but the show resisted proposed changes. Given that ABC's parent company, Disney, also owns the ESPN, and partners with the NFL, it is pretty easy to believe that the network was likely trying to curb the possibility of animosity from football fans.

Once news broke that the Black-ish episode about athletes kneeling during the national anthem was pulled, fans erupted in frustration on Twitter. Check out some of the responses below:

Athletes kneeling during the national anthem has been a polarizing social and political issue throughout the past year. The act began when former San Francisco 49ers quarterback Colin Kaepernick first kneeled during the national anthem prior to a 2016 game. In the midst of multiple allegations of police brutality against black citizens, Kaepernick explained that his decision to kneel was an act of protest to highlight the unjust racial divisions still at work within the United States.

Since Kaepernick first kneeled, many other athletes began kneeling during the anthem as well, and the act became a lightning rod of controversy among sports fans and social activists throughout the country. President Trump has fanned the flames of this controversy several times by posting numerous tweets condemning athletes who choose to kneel during the national anthem.

Given the issue's hugely topical status and its importance to the discussion of race in America today, Black-ish fans were probably already expecting the show to have an episode focused on athletes kneeling during the anthem. But apparently, that episode is not going to see the light of day. Maybe if the show was on a network that wasn't in bed with the NFL...

More like this
Who Did Emily Poison? 'The Handmaid's Tale' Season 2 Is Off To An Intense Start
By Ani Bundel
In 'Riverdale' Season 5, Toni Topaz Is The Black Superwoman Without A Cape
By Erika Hardison
Hailey Baldwin's Quotes About Being Rude To Her Waitress Cover A Lot Of Ground
By Brandy Robidoux
Stay up to date