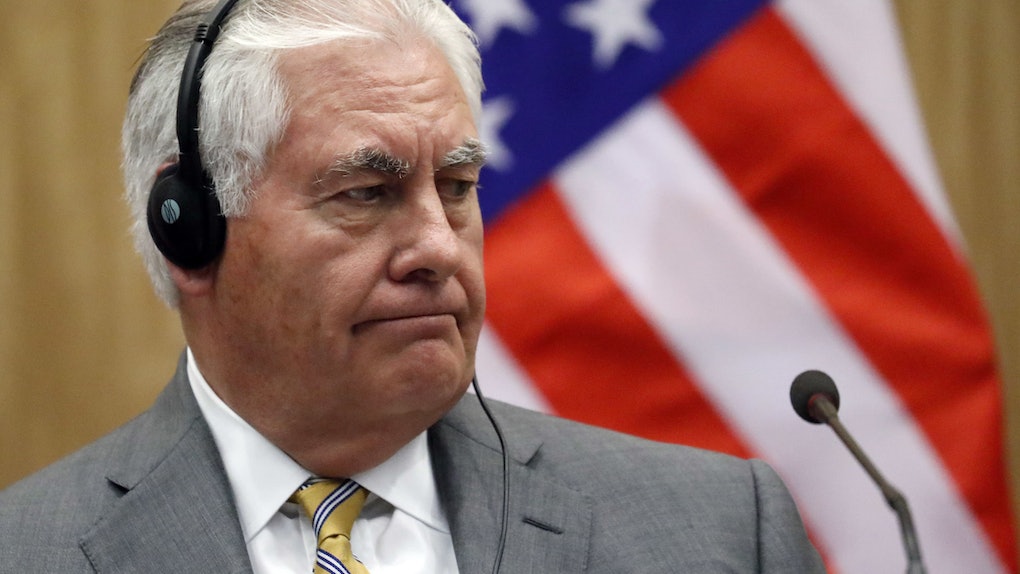 I'm sure I don't have to tell you that there have been some tumultuous times since Donald Trump was sworn into the office of the President of the United States. It seems like every day you're just waiting for the other shoe to drop (if it hasn't already). One of President Trump's cabinet members, Secretary of State Rex Tillerson, was recently touring parks in Geneva, Switzerland, and a comment he made while looking at a statue had all of the internet shaking its head in agreement. These tweets about Rex Tillerson's "curl up in a ball" quote are the most relatable things you'll see today.

According to Business Insider, Tillerson came upon a statue of two people huddled together in a ball while he was being shown the parks of Geneva. In the video tweeted out by ABC News, you can see Tillerson go in to get a closer look, and then he comes up and says, "Yeah, some days I feel like I need to do that. Curl up in a ball." Twitter immediately jumped at the chance to say something to the effect of, "Right back at ya, Rex."

Now, Tillerson didn't expand upon his statement as to the reasoning, but many people understood it as having to deal with Trump, or at least that's how most people related to it.

Here's Tillerson saying the words that were likely uttered by many people on the morning of Nov. 9, 2016.

A lot of people related to Tillerson right away.

Again, Tillerson didn't specify Trump as his reasoning, but that's where most people went.

One commenter related to the urge to "curl up in a ball" so much so that only all caps could express it.

Another used it to put a twist on Trump's now-famous campaign slogan.

Honestly, I could go either (eh, neither) way.

I wonder on what days the "curl up in a ball" club meets?

I'm sure Tillerson could pencil it in.

People were really identifying with Tillerson on this one.

Awkward, for sure. Now I can't stop wondering if Tillerson is abruptly shaken out of a curled-up ball position before every cabinet meeting.

The solution appeared to be simple one for this commenter.

Others couldn't muster up any sympathy for Tillerson.

Hey, maybe he thought this was all just a really elaborate premise for The Apprentice?

This commenter thought that the "curl up in a ball" urge would be more of a regular occurrence.

Another commenter circled back to a comment made by Trump in which he said of Tillerson, "Sometimes I’d like him to be a little bit tougher."

Hey, even Michael Scott could relate to this feeling that Tillerson is having.

Unfortunately, it feels like this "rough patch" isn't on its way out any time soon.

Of course, there are many reasons why someone might want to "curl up in a ball." Heck, it's Friday now, so there have probably already been a few times this week when the thought crossed your mind. Although your troubles might relate more to work projects or studying for a big test that's coming up, not conducting official state business with hostile powers like North Korea. On top that, while Tillerson is attempting diplomacy, Trump is using all 140 of his characters to do his best to undermine him and his efforts.

Oh, and don't forget about the report that recently came out reportedly claiming that Tillerson privately called Trump a "moron" (once again echoing the thoughts of many Americans). It's true that Tillerson chose to accept the job of his own accord, but I wouldn't doubt that curling up into the fetal position seems more necessary for him with each day that passes.