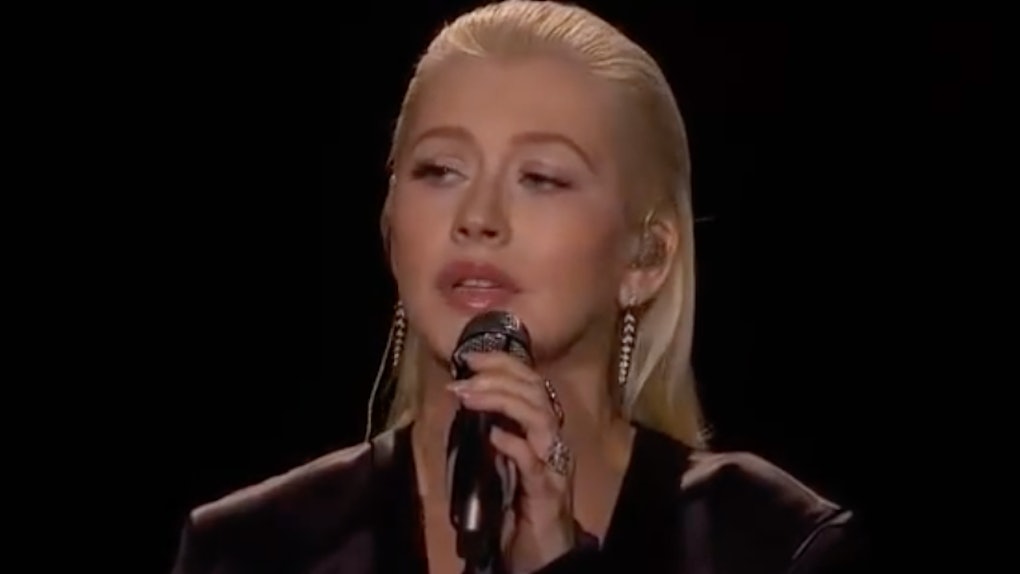 Tweets About Pink's Reaction To Christina Aguilera's AMAs Performance Are Everything

Our girl Xtina took us on a journey tonight during a tribute to Whitney Houston, and tweets about Pink's reaction to Christina Aguilera's AMAs performance are giving us life. That's because no one could quite figure out how she felt, nor could we decide how we felt. On one hand, we all love to love Christina Aguilera. On the other, the performance was a little bit all over, in like an extra-riffs-we-probably-didn't-need kind of way. Plus, these two power-houses have some weird beef that's recently come to the surface, giving Pink's facial expressions a little extra drama.

Pink recently revealed on an episode of Watch What Happens Live that Aguilera once tried to punch her in a nightclub many, many years ago.

Yup. You read that right. Teeny-tiny Christina tried to take down literal and actual fitness hero Pink. She explained to host Andy Cohen,

We were super young and super new at the whole [fame] thing. I think I’m an alpha and she’s an alpha, and I’m used to taking my altercations physical and she’s used to having them verbal. We just are very different, we’re very different. … Women have to learn how to support each other. It’s not taught to us on the playground.

Knowing these details, it was extra fascinating when they panned to her during Aguilera's performance.

It was hard to tell... is she into it? Does she hate it? Is she judging or just feeling the vibe?

Twitter didn't know what to think, except that whatever was going on with Pink, the general public agreed.

Apparently, whatever drama happened in the club way back when is buried now. Pink continued in her interview,

We’re fine. She’s so talented. And deep down — I’ve had bad days too — she’s a really sweet person. We made up on The Voice. I mean, it was funny. I laughed. It was just funny. I hadn’t seen her in years and years and years. We became moms and we grew up and we hugged it out. It’s that simple. I feel so good about that.

If you guys remember, the two changed our lives forever with Lil Kim and Mya in the ultimate classic (if that's what you can call it) "Lady Marmalade."

That song and music video came out a whole 16 years ago, and you better believe both Aguilera and Pink have changed since then. And not for nothing, Aguilera had some big shoes to fill tonight.

Singing a medley of Houston's hits from the movie The Body Guard, Aguilera did her best Whitney-runs and finger waving riffs. She paired down her usual heavily-lined lids for a glossy, natural look, and rocked a simple black dress, slicked black blonde hair, and lots and lots of lip balm.

In the end, Pink put our guessing to an end and tweeted the following statement:

Yes. THIS. Christina fucking killed it tonight for one of our favorite singers ever. This about Whitney, and I am in awe of Christina's talent. Show the clip where I'm in tears, you negative Nancy's

In fact, Pink even tweeted out this message earlier this summer,

Want to point out an awful new phenomenon of the last 10 years. I [love] Xtina, we’ve made amends. Music brings us all together. The best part of music is- there’s room for everyone to win at the same time. Don’t be what’s wrong with the world. Let’s be an example of inclusion and celebration. You don’t have to like me at all, I’m ok with that. Just be a decent person.

Listen, Pink, Xtina: You're my heroes. Whatever you say, do, think, believe, and whatever faces you make on TV, I'm all in. Love to love you two.

More like this
The 'Glee' Cast's Tribute To Naya Rivera At The 2021 GLAAD Media Awards Was So Moving
By Abby Monteil
These Tweets About Taylor Swift's "Mr. Perfectly Fine" All Ask 1 Important Question
By Sydney N. Sweeney
Kim Kardashian's Reaction To Watching 'Bridgerton' For The First Time Is Everything
By Michele Mendez
Stay up to date