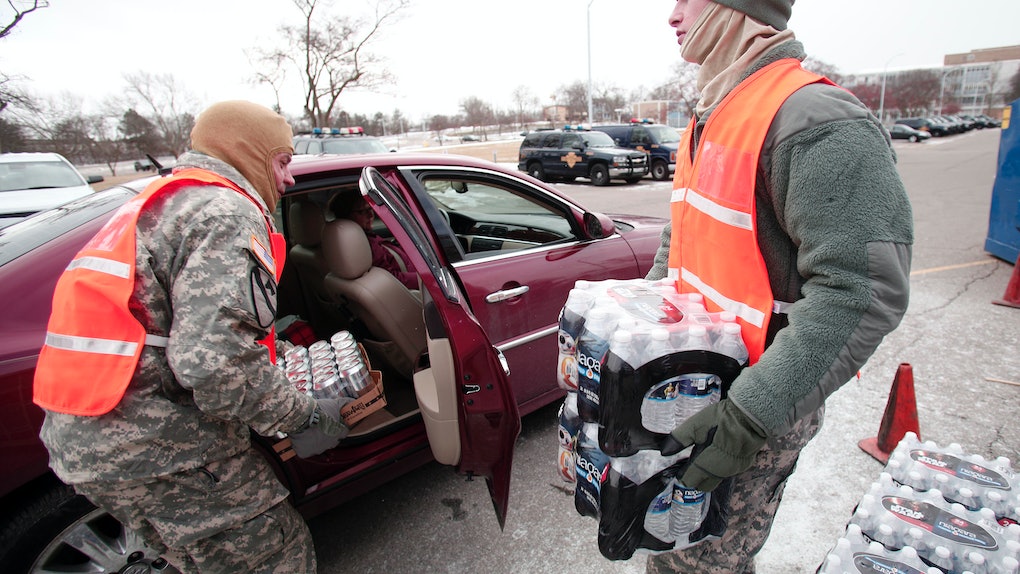 On April 6, Michigan Gov. Rick Snyder announced that the state would stop providing free bottled water to residents of the city of Flint, which made headlines in 2016 after it was discovered that the city's water supply was contaminated with lead. Now, Michigan officials claim lead levels in the water are stable, but many people are criticizing the decision. These tweets about Flint ending free water distribution are required reading if you want to know what this decision means for Flint locals.

Gov. Rick Snyder released a public statement about the decision on April 6 via his website, claiming water quality has been restored and is within drinking standards for residents.

I have said all along that ensuring the quality of the water in Flint and helping the people and the city move forward were a top priority for me and my team. We have worked diligently to restore the water quality and the scientific data now proves the water system is stable and the need for bottled water has ended. ... Since Flint’s water is now well within the standards set by the federal government, we will now focus even more of our efforts on continuing with the health, education and economic development assistance needed to help move Flint forward.

The city had been receiving free bottled water since January 2016, when a 2016 study by the American Journal of Public Health found that Flint children held high levels of lead in their blood after the city switched to the Detroit water system in 2011. Roughly 8,000 children were exposed to high levels of lead and the study also linked 12 deaths from Legionnaires’ disease to the city's water quality. Studies showed that the a lot of the lead contamination came from aging, lead-lines pipes. As a result, Michigan agreed to pay $87 million to replace those pipes, but unfortunately there's still a lot of work to be done. According to The Times, a little over 6,000 pipes have been replaced in Flint, Michigan thus far. The city aims to have all pipes replaced by 2020, but according to an administrator, there could be at least 12,000 pipes remaining to be replaced.

Snyder may claim that this is the right decision, but others don't buy that Flint's water is safe enough to drink and are taking to Twitter to express their anger.

It doesn't look like the residents of Flint have much faith in the decision, either. One Twitter user even posted a video on April 7 via Twitter showing the line of Flint residents waiting to receive clean water.

Flint’s mayor, Karen Weaver, told The New York Times that she wasn't made aware of Gov. Snyder's decision until "a few moments before" it was made public. Weaver expressed her disapproval of the decision through a press release on Flint, Michigan's website, and claimed she plans to contact Gov. Snyder to find a solution:

I know this is not the situation any of us want to be in. We did not cause the man-made water disaster, therefore adequate resources should continue being provided until the problem is fixed and all the lead and galvanized pipes have been replaced. I will be contacting the Governor’s office immediately to express the insensitivity of the decision he made today and to make sure he is aware of the additional needs that I have requested for the residents of Flint.

Perhaps what makes residents so skeptical of authorities' claim that the water in Flint is fine is that upon discovering the high levels of lead in the city's water supply in 2016, the city and state officials repeatedly claimed that the water was fine. In July of 2015, after months of concerns from residents, a spokesman for the Michigan Department of Environmental Quality told Michigan Public Radio that "anyone who is concerned about lead in the drinking water in Flint can relax" and suggested that it was not a widespread problem. Two months later, a report from Virginia Tech University found that 40 percent of homes had elevated lead levels.

The Associated Press reported in April 2016 that state employees had been charged with conspiracy and tampering with evidence as well as failure to provide safe drinking water to city residents. Four city and state employees eventually reached plea deals, while four others have gone to trial on charges of misconduct in office and willful neglect of duty, among other charges.

Since news about Flint surfaced in 2016, both residents and activists alike have accused high-profile politicians of allegedly disregarding low income areas like Flint, particularly those with high populations of people of color. According to the U.S. Census Bureau as of July 2016, the majority of Flint, Michigan's population is African American and the average household makes less than $25,000.

Want to know how you can help Flint? Check out all the ways you can lend a hand.