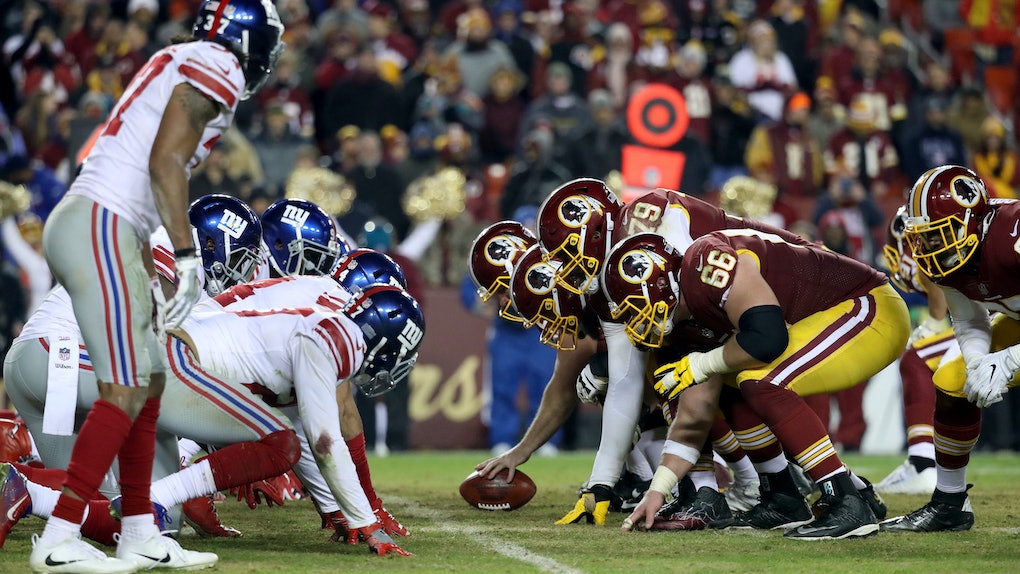 While many were spending the Thanksgiving holiday offline, Donald Trump didn't let up on picking Twitter fights. The president was at it early on Black Friday with a morning message about football. Trump tweeted about the NFL and Roger Goodell, the league's commissioner, marking the third time in five days he's lashed out at National Football League.

From the comfort of his Mar-a-Lago golf resort in Florida, Trump tweeted, "Can you believe that the disrespect for our Country, our Flag, our Anthem continues without penalty to the players. The Commissioner has lost control of the hemorrhaging league. Players are the boss!"

The feud between Trump and the NFL spawned out of players' protests of the national anthem, began by former 49ers quarterback Colin Kaepernick in 2016 when he drew attention to police brutality by kneeling during the pre-game ritual. Trump has been a persistent and vocal critic of the players' rights to protest the anthem, saying that it disrespects the flag and the fails to honor the nation's armed forces that protect it.

His concern for the flag has many saying he's edging into unconstitutional territory, by saying players who opt to kneel should be banished. And with his tweet on Friday, he came under fire again for his targeted words.

"Trump seems to be complaining that NFL players are protected under the First Amendment," tweeted MSNBC producer Kyle Griffin, quoting the president's tweet.

Author and U.S. government and politics expert Brian Klaas also commented on the outburst, saying, "Trump's obsession with the NFL protests makes more sense if you understand it's a familiar tactic for wannabe despots: publicly shaming people exercising their democratic rights while using divide and rule tactics to scapegoat minorities."

ESPN sports business reporter Darren Rovell apparently did the math, giving a run down on how full-fledged Trump's obsession with the football league has become. Following the Friday tweet, "Trump has now tweeted more than 40 times about the NFL and the National Anthem," Rovell wrote on Twitter.

Fans and casual Tweeters are also expressing their opinions on the president's obsession with the National Football League, with many clearly mystified at the sheer volume of his pointed tweets.

For his part, NFL Commissioner Goodell appears to vascillate on his feelings about the kneeling protests, first expressing pride about the league handling of the president's attacks, then later stating that the players should stand. Back in October, Trump praised a statement by Goodell requesting that all players in the league stand for the national anthem. But in the months prior, Trump had repeatedly condemned the league, its players and the commissioner.

The president's criticism reached a flashpoint when, in September of this year, Trump lashed out at Goodell for not suspending Kaepernick and called for players to be fired, doing so in expletive-laden terms. His words were met with condemnation by many in the league, with many teams — coaches included — opting to make a show of solidarity with their protesting players.

Trump's Friday remarks also follow another bout of NFL talk from Wednesday. Just before Thanksgiving, Trump tweeted, "The NFL is now thinking about a new idea - keeping teams in the Locker Room during the National Anthem next season. That’s almost as bad as kneeling! When will the highly paid Commissioner finally get tough and smart? This issue is killing your league!"

And Monday, Nov. 20, Trump tore into the Raiders' player Marshawn Lynch, calling for his suspension on Twitter. "Marshawn Lynch of the NFL’s Oakland Raiders stands for the Mexican Anthem and sits down to boos for our National Anthem," Trump wrote. "Great disrespect! Next time NFL should suspend him for remainder of season. Attendance and ratings way down."

How the league and its players will respond to Trump's latest rant is up in the air, and if it's anything like last time, might make him enemies in the football world. But at least he has Tiger Woods to golf with in the meantime.