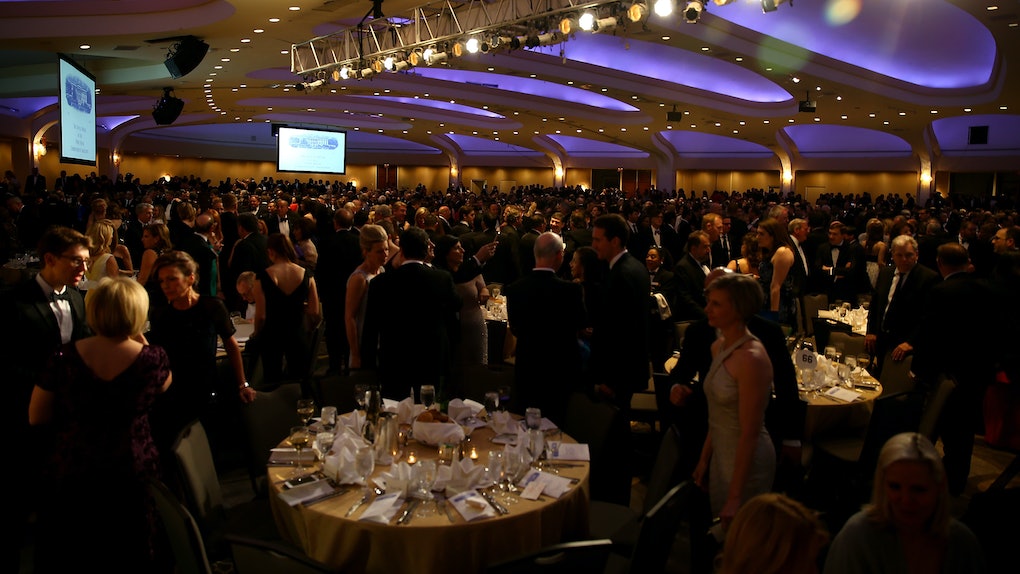 While celebrities, politicians, and press gathered at the White House Correspondents' Dinner for an evening of much-needed humor, President Donald Trump did not have a seat at the table. He spent Saturday, April 28 far, far away — at a Trump rally in Michigan — but his comments since indicate the dinner is still giving him quite the headache. Trump's tweet about Michelle Wolf and Seth Meyers shows he may still harbor some bad feelings about his roast at the dinner.

Since the event, Trump has tweeted three times, hours later, on the dinner he choose to miss. "The White House Correspondents' Dinner was a failure last year, but this year was an embarrassment to everyone associated with it," he tweeted late Sunday night. "The filthy 'comedian' totally bombed (couldn't even deliver her lines-much like the Seth Meyers weak performance). Put Dinner to rest, or start over!"

Though Trump seems to want to put the issue of the WHCD to bed, he followed up his Sunday tweet with another — at 8 a.m. ET Monday, some 36 hours later.

Trump, in calling out Michelle Wolf and Seth Meyers, was referring to the comedians who hosted the dinners this year and in 2011, respectively. While Trump missed the 2018 event, he did attend the one in 2011 while President Barack Obama was in office.

In response, Meyers had a tweet of his own for Trump. "You remembered!!! Happy Anniversary, Boo," the comedian tweeted, quoting the president.

She didn't limited her disses to the president, but there was no shortage of attacks on Trump. Wolf joked that Ivanka was "supposed to be an advocate for women, but it turns out she's about as helpful to women as an empty box of tampons. She's done nothing to satisfy women. So I guess, like father like daughter."

In another tweet from Sunday, Trump called the 2018 dinner "a very big, boring bust," and said "the so-called comedian really 'bombed.'"

The 2011 affair involved Trump in a completely different context — he attended as a guest amidst a consideration to run for president in the following year's election — but he still got roasted all the same. He even took heat from the sitting president whom he was thinking to challenge.

"Donald Trump is here tonight," Obama began, per The Daily Beast. "I know that he's taken some flak lately. But no one is happier, no one is prouder, to put this birth certificate matter to rest than The Donald. ... [H]e can finally get back to focusing on the issues that matter, like, did we fake the moon landing? What really happened in Roswell? And where are Biggie and Tupac?"

"Donald Trump has been saying that he'll run for president as a Republican," host Seth Meyers said, "which is surprising because I just assumed that he was running as a joke."

The remarks about him apparently hit a nerve. According the The Daily Beast, Trump and Melania got up and left after Obama and Meyers' harsh remarks. And he has made his own form of walk-out gesture this year in response to the roast, digging up old wounds from seven years ago in the process.

On Monday morning, he again laid in on the dinner, this time going after the entire tradition. "The White House Correspondents’ Dinner is DEAD as we know it," he tweeted. "This was a total disaster and an embarrassment to our great Country and all that it stands for."

While he hopes we can put it all behind us, I'm willing to bet that this isn't the last we'll be hearing from the president about Saturday's dinner (or about dinners previous).