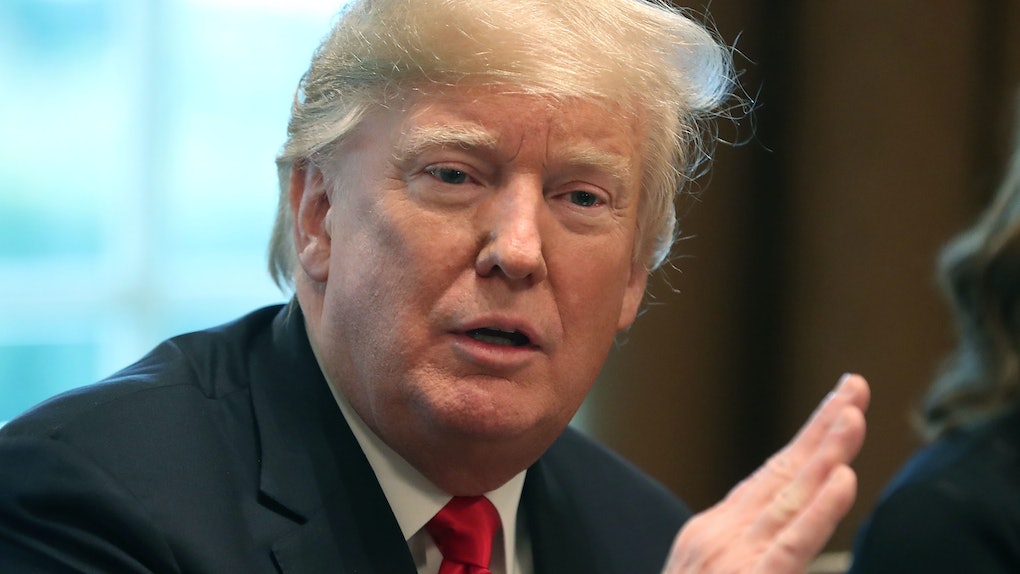 Amidst all the other drama ensuing around Washington of late, here's one piece of legal news you might've missed: President Donald Trump has been busy filling up the judicial branch with new picks. In fact, he's already successfully placed a staggering number of judges onto the nation's courts since taking office, the majority of whom, per reports, have been both conservative and controversial picks. In many ways, Trump's federal court judge appointments could have massive impacts in the country's judicial system.

As of Jan. 10, Trump had successfully appointed 30 circuit court judges in under two years in office, a rate unparalleled by his recent predecessors, according to a Washington Post analysis from September 2018. At that point, with 26 confirmations at the time, Trump had already appointed more judges in his first two years than the five previous presidents at the same point in their presidencies. And after the midterm elections, Trump still has the safely Republican-majority Senate, which is responsible for confirming federal judges, on his side, so there's little that stands in the way of the confirmations.

"Thanks to @SenateMajLdr McConnell and the @SenateGOP we are appointing high-quality Federal District ... and Appeals Court Judges at a record clip!" Trump wrote in a two-part tweet from Nov. 2017. "Our courts are rapidly changing for the better!" And a lot has continued to change since then.

Though these appointments haven't been as high-profile and controversial as the confirmations of Justices Neil Gorsuch and Brett Kavanaugh to the U.S. Supreme Court, the lower court appointments are causing concern among some legal advocacy groups and Democrats alike, and for good reason. Because of their unique position, these judges often get the final say on major cases — and therefore major issues — facing the country that can have lasting effects for years to come.

Those courts are enormously important and their membership is as well.

Circuit court judges have a huge responsibility to determine the fate of some of the biggest legal cases in the country, with about 50,000 of them a year, per USA Today. The U.S. Court of Appeals (aka the circuit courts) consists of 179 judges who sit on 13 courts organized by region. Together, the Court of Appeals acts as an arbiter when rulings from cases tried in the lower courts are disputed.

The circuit courts are also the last stop before the Supreme Court, so these judges also act as gatekeepers for these cases. Because the Supreme Court docket is so selective, appellate courts often act as the final rulers on many of those disputed cases.

"Because the Supreme Court decides less than 100 cases each year, almost all cases filed in the federal courts terminate at the Circuit level," Amanda Tyler, a law professor at the University of California, Berkeley tells Elite Daily via email. "This means that those courts are enormously important and that their membership is as well."

While there may be numerous judges assigned to the circuit, an appeals court case is generally heard by a panel of three judges and no jury, so each judge's opinion can literally make or break the ultimate ruling, and the impacts can be far-reaching. One recent example: A circuit court earlier this month blocked Trump's proposed changes to seeking asylum in the United States. So, the stakes are high.

It's important, then, that this new class of judges, as many outlets have described them, is cut from the conservative Gorsuch/Kavanaugh cloth. Many of these appointees have already gotten to work deciding crucial cases concerning issues such as gun control, abortion, and health care. For example: the December 2018 ruling that the Affordable Care Act (ACA) is unconstitutional, which was made by a Trump-appointed district court judge in Texas. That decision, which was highly controversial, was appealed in December to the 5th Circuit Court of Appeals.

Beyond their ideological leanings, the federal judges Trump has so far appointed, The Post's report shows, have been younger, whiter, and more likely to be male compared to his immediate three predecessors (Barack Obama, George W. Bush, and Bill Clinton). As the Brennan Center for Justice notes in their analysis, having judicial diversity — both in terms of demographics and professional background — is important. "Diverse experiences and perspectives to bear allows judges to make better informed decisions and increases public confidence in their rulings," it said. Elite Daily reached out to the White House for comment on the criticism and appointments, but did not immediately hear back.

Moreover, their relative youth means they'll likely be around for a long, long time. Americans can look forward to the judges being "active members of their courts for two decades or potentially more," Tyler tells Elite Daily. "This means that the current administration's appointments will have a lasting presence on the circuit courts, and it also means that the longer this administration is in place, so long as the Senate continues to confirm its proposed judges, that presence will only grow in size and duration."

Overall, these candidates have also been increasingly contentious picks that have drawn the scorn of Senate Democrats. According to Pew Research Center, Trump's judicial nominees have gotten significantly more pushback in the Senate voting process than the norm, with an average of about 22 "no" votes per candidate, compared with around averages of 6, 2, and 1 for the previous three presidents.

Democratic Sen. Dianne Feinstein of California laid into one of Trump's judicial picks in October, calling them "controversial candidates," some of whom "had no judicial experience;" it's not clear to whom she was referring, but the White House did not respond to Elite Daily's request for comment on the statement.

On Dec. 11, Trump appointee Jonathan Kobes, for the first time in U.S. history, needed a tiebreaker vote to get confirmation. Democrats voiced their concerns that Kobes had received a "not qualified" rating by the American Bar Association (ABA), but Kobes was confirmed nonetheless, and will serve on the 8th Circuit Court of Appeals.

Beyond Congress, the controversial judges have received mixed reactions; conservative groups have heaped praise on Trump and Senate GOP leaders for swiftly pushing a new class of generally right-leaning judges into the open seats, while others have expressed concern about the impact of these new judges. Take the ACA case in Texas — it's now likely up to the 5th Circuit Court to uphold or reject the decision, which could have massive implications for the ACA. "The notion that the[se judges] are going to be the check on decisions like [the Texas ruling] are things that should give people pause," Sharon McGowan, legal director of Lambda Legal, told BuzzFeed.

It's worth adding that, though other judges may retire, there aren't a high number of vacant seats left to be filled on this court as of now. But those which have already been filled will leave a lasting mark. With an unprecedented pace of judicial appointments, Trump has made significant progress at changing the face of a major part of one of the nation's three branches of government — and you can expect them to have an impact.