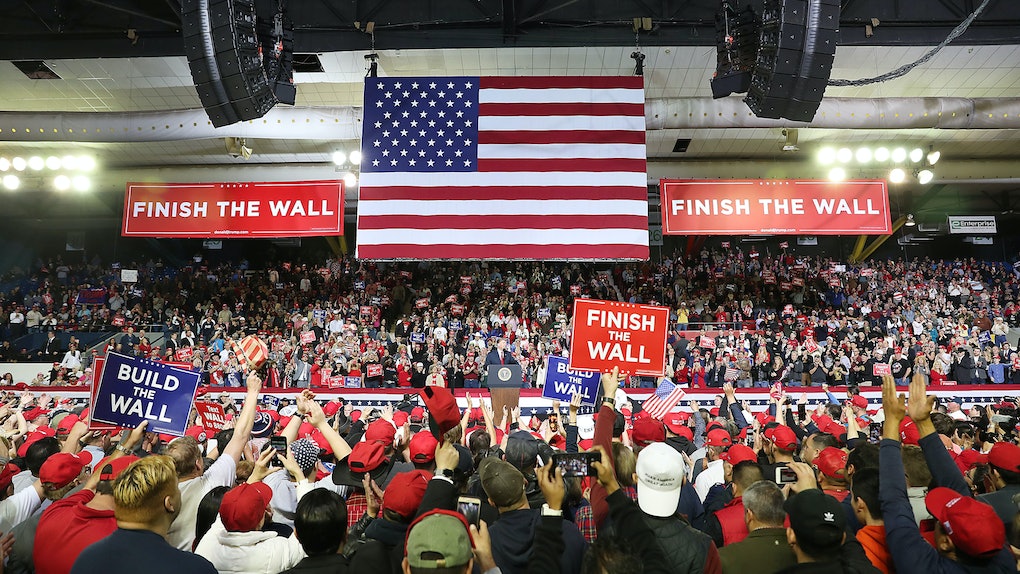 President Donald Trump's rally in El Paso, Texas, on Monday, Feb. 11, has proven to draw a lot of attention, if not necessarily as many people as he'd like. While the president is known to enjoy large-scale events, he's also been known to embellish just how large they turn out to be. But there's always someone ready to fact-check his claims, and Monday was no different: Trump's El Paso rally crowd size claim was disputed by officials in the area.

According to POLITICO, Trump characterized his crowd size at the El Paso County Coliseum on Monday night as unprecedented. "There has never been anything like this in the history of our country," he reportedly told the crowd. "If you would say, as an example, that tonight 69,000 people signed up to be here," he went on. "Now the arena holds 8,000. And thank you, Fire Department. They got in about 10,000. Thank you, Fire Department. Appreciate it."

But El Paso Fire Department spokesperson Enrique Aguilar disputed this, telling the El Paso Times newspaper that the fire department gave him no special allowance to let in more attendees. "It might be 10,000 with the people outside," Aguilar estimated, but there was definitely not that number of people within the Coliseum itself, clarifying that the arena was at capacity, which is 6,500 people. Elite Daily reached out to Aguilar for additional comment on the situation, including whether it was even possible to make an exception to allow more people inside a closed space, but didn't receive a response as of publication.

While images and videos from the event suggest there was a reasonable turnout, it's not clear that the internal attendance in the Coliseum was anywhere near the 10,000-person estimation the president made it out to be. Elite Daily reached out to both the Trump campaign and the White House for comment on the claims and fire department response but did not hear back at time of publication.

The El Paso Times noted that as of about 4 p.m. local time, a crowd of thousands had gathered to watch the speech on screens outside as the Coliseum had already filled up. Footage from Trump campaign social media director Dan Scavino shows the crowd outside the Coliseum, and it does indeed appear to be a large gathering. So it's not clear why Trump, especially with a reasonable crowd of supporters, proceeded to make the claim about the fire department's role and the 10,000-person attendance into the event space.

Even before the rally began, Trump was already touting his crowd size.

But the president also made an odd comment leading up to the rally, seeming to suggest that the night wouldn't have as large a gathering as he'd like to see. "I like the old days when I was allowed to make outdoor speeches," Trump said, according to a tweet by CNN's Jim Acosta. "It was a lot easier because you could have very big crowds."

Ever one to draw comparisons between himself and others, Trump also suggested that his crowd size was much bigger than a competing rally being held nearby for Democratic politician Beto O'Rourke.

But estimates of the crowd size for the Democrat's rally ranged between 7,000 and 15,000. Bloomberg's Jennifer Epstein tweeted that El Paso police estimated the crowd at the higher end of the range, giving out a figure between 10,000 and 15,000. Neither the White House nor the campaign had returned Elite Daily's request for comment on Trump's claims about O'Rourke's crowd size as of publication.

It's not much of a surprise that Trump was so fixated on the crowd sizes, though — after all, this has become a staple of his public appearances since he was a candidate, and has continued even after he won the presidency in 2016. Even when aerial images and crowd scientists confirmed that his inauguration crowd was significantly smaller than President Barack Obama's, Trump has stuck to his guns on claiming he pulls a better crowd than anyone.

So, Monday's claim was merely the latest instance of the president boasting about his ability to draw a crowd — and officials disputing it. So however you take it, take it with a grain of salt.