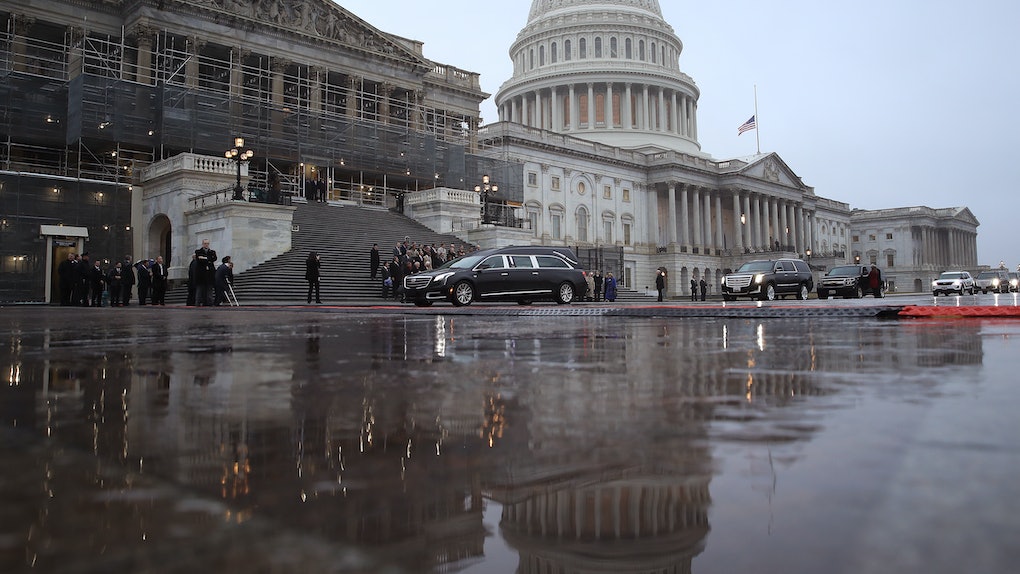 The clock is rapidly ticking to pass a deal through Congress that President Donald Trump will sign off on before a second partial government shutdown goes into effect. But while lawmakers are still in the process of voting on a government spending bill Thursday, Feb. 14, Trump will apparently declare a state of emergency to get his border wall and avoid a second shutdown.

Lawmakers had until end of day Friday, Feb. 15 to make a deal before multiple federal agencies will once more shutter their doors beginning on Saturday. Votes were scheduled in both chambers on Congress Thursday, with the Republican-held Senate going first, followed by the Democratic-held House. The bill passed the Senate, and now goes to the House for a vote, and if it passes there, will proceed to the president's desk for approval.

Where, apparently, it will set his signature. White House Press Secretary Sarah Huckabee Sanders tweeted a short statement on the afternoon of Thursday, Feb. 14, saying that the president could in fact sign the bill. She wrote, in what was apparently a screenshot from her phone,

President Trump will sign the government funding bill, and as he has stated before, he will also take other executive action — including a national emergency — to ensure we stop the national security and humanitarian crisis at the border. The President is once again delivering on his promise to build the wall, protect the border, and secure our great country.

The White House did not immediately respond to Elite Daily's request for additional comment.

For what it's worth, Senate Majority Leader Mitch McConnell appeared to confirm the move, both the signature and the declaration of emergency. "I had an opportunity to speak with President Trump and he ... has indicated he's prepared to sign the bill," he said Thursday, speaking on the Senate floor just before the vote. "He also [will] be issuing a national emergency declaration at the same time. I indicated I'm going to support the national emergency declaration."

So there you have it: It looks like the government will stay open, but we'll get a national emergency declared in the process.

The deal itself — an 1,100-page behemoth — was largely seen as a compromise for both parties, but it doesn't meet the president's demand for $5.7 billion in funding for a border wall with Mexico. Rather, the proposal reached by the bipartisan group earmarks $1.38 billion for the improved fencing along 55 miles of the southern border, part of a total $22.4 billion that would go to border security, Bloomberg reports.

The national emergency option is a workaround for the president whereby he would use executive action to declare the emergency and free up funds to bypass congressional approval.

However, according to CNN, conservative commentators are already casting criticisms on the latest proposal as they did with previous ones, and aides have expressed uncertainty over whether he'd sign it. And if the last three months of legislative chaos has taught lawmakers anything, it's not to count their eggs before they hatch. During previous iterations of the budget negotiation back in December, Trump had initially agreed to sign off on a proposal only to balk at the last minute.

According to NBC's Kasie Hunt, Senator Chuck Grassley reportedly opened the Senate by saying, "'Let's all pray that the president has the wisdom to sign the bill."

"Pretty much all you need to know about today," she added.

But the president said he wasn't inclined to stand in the way of Congress' latest proposal this time. "I don't want to see a shutdown. A shutdown would be a terrible thing," Trump told reporters Wednesday, Feb. 13. "I think a lot of good points were made [in the last shutdown], but I don't want to see another one. There’s no reason for it."

The last shutdown just ended only a few weeks ago. That shutdown began Dec. 22 and lasted 35 days, ending Jan. 25 when lawmakers sent through a short-term stopgap measure to reopen the government while they continued to hash out terms of an agreement on how to fund the government, most notably, the Department of Homeland Security (DHS).

So, at least we're avoiding that this time around. It remains to be seen what kind of wrench a national emergency may throw into things.