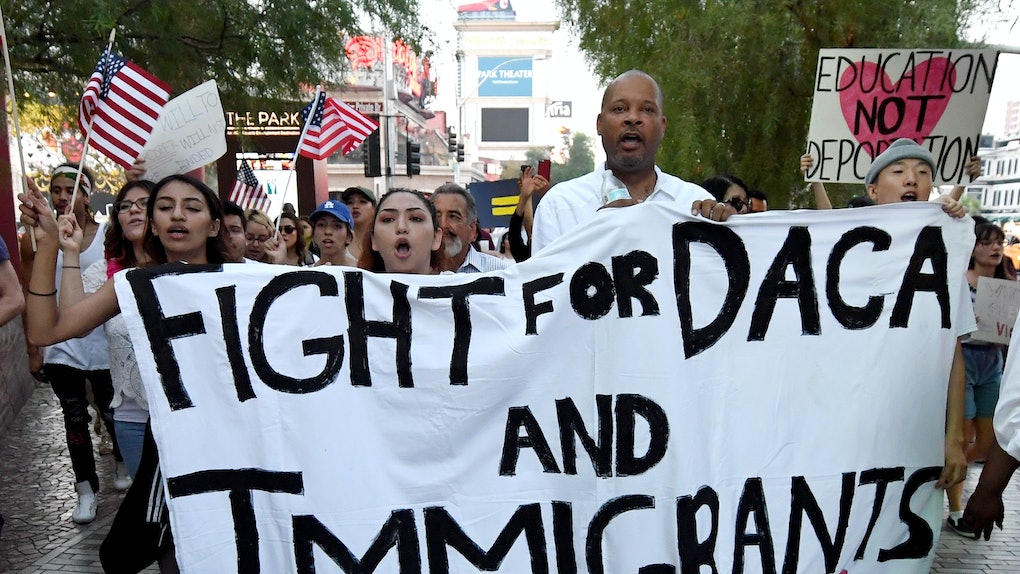 In a move that's bound to raise a Republican eyebrow or two, a Trump administration official suggested on October 3rd that the administration would back legislation that creates a citizenship path for Dreamers, undocumented young people who were brought to the U.S. as children. But, if it sounds too good to be true, that's because there's a catch: it appears the administration might only support a bill that applies to those who are already recipients of the Deferred Action for Childhood Arrivals (DACA) program — not those who would also have qualified if it weren't rescinded.

Asked at a Senate hearing on Tuesday if Dreamers should be allowed to remain in the country, a ‎U.S. Department of Homeland Security official suggested that the administration would support a legal pathway, according to Reuters. "Under a rational bill these individuals would be able to become lawful permanent residents with a pathway to citizenship," Michael Dougherty, the Assistant Secretary for Border, Immigration and Trade Policy, said.

Hours later, though, the Department of Homeland Security backtracked, saying Dougherty's testimony did not represent the views of the President. In a statement to Reuters, the department's deputy press secretary Tyler Q. Houlton said:

“Mr. Dougherty was not stating administration policy or the President’s views ... The White House will be issuing its priorities for immigration reform in the coming week.”

In September, the Trump administration announced that it would end DACA, an Obama-era program that allowed undocumented immigrants who came to the U.S. before they were 16 to apply for work authorization and avoid deportation for a period of two years.

Since the program's creation in 2012, nearly 800,000 young people have received the protections. The White House ended the program with a six-month delay, giving Congress a window to pass immigration legislation before March, all the while leaving hundreds of thousands of Dreamers in limbo about the future of their status.

While Dougherty did not give details at the hearing about whether the White House would only back a path to citizenship for individuals who are already DACA recipients, GOP lawmakers who had dinner at the White House on Monday had a more definitive view.

Sen. Tom Cotton (R-AR) told Politico on Tuesday that any deal for Dreamers would have to include include enhanced immigration enforcement measures and "end chain migration." He said,

The president was very clear. Any effort to codify DACA needs to, one, be limited to DACA so the first criteria under the law should be you have a DACA permit today.

If the Trump administration only backs legislation that includes current DACA recipients, bills that create a pathway to citizenship for a larger group, such as the Dream Act, would be disqualified.

October 5th marks the deadline for Dreamers to renew their DACA status for another two years — and it will be their final chance to renew deportation protections under the program, unless Congress passes immigration reform.

To qualify for DACA to begin with, applicants had to provide proof of education, residence in the U.S., pass background checks and pay a $495 fee. Given that applicants had to provide so much personal information to the government, some fear it could be used to hasten their deportation. "I'm definitely scared. There's many years in my past in which I lived in complete fear," Luis Perez, a DACA recipient, told ABC7 in September. "To go back to that, it just breaks my heart that not only myself, but a lot of my family members will have to go back into the shadows."

Trump's harsh line on immigration was central to his campaign. Now, though, his apparent sympathy for Dreamers and DHS's latest statement on Dougherty's testimony are sending mixed messages.