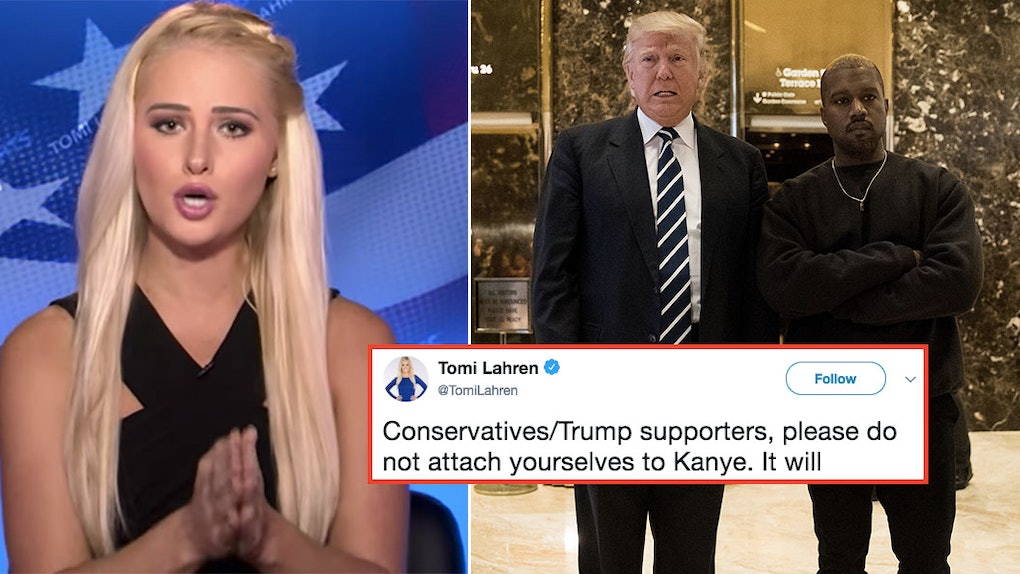 Tomi Lahren's Comments About Kanye Actually Makes Sense, So That's Where We're At

If you were doubting that 2018 has it all, consider this: conservative commentator Tomi Lahren has become a voice of reason, in a conversation about Kanye West. Not the voice, mind you, just a voice, but it's worth noting nonetheless. On the Wednesday, May 3, edition of her web series, Final Thoughts, the Fox News personality warned conservatives to not "attach" themselves to the 40-year-old rapper, and yes, Tomi Lahren's comments about Kanye actually made sense.

"No Kanye, slavery was not a choice," Lahren said during the segment. "That's absurd. I’m sorry, but is that really the kind of messenger we want for the movement? Maybe I’m wrong, but I think Kanye’s change of heart has little to do with Trump, politics, or free thought — and a heck of a lot more to do with Kanye promoting Kanye — as usual. This is a man who will do and say anything to be the center of attention."

Lahren also called Kanye a "loose cannon" whose political opinions shouldn't be glorified. And, just so everyone's clear, Kanye's recent comments have been praised by notable right wing personalities, like Laura Ingraham and Donald Trump Jr. Meanwhile other conservatives, like (it turns out) Lahren, have warned against entertaining the rapper.

During her segment, Lahren also got on to what is one of the more obvious points a Kanye skeptic would make: that Kanye is simply going out of his way to draw attention before forthcoming album releases.

"Look, Kanye is a businessman. And he knows how to get people talking - about him - better than anyone else," Lahren said. "It’s smart, on his part. So let me get inside Kanye’s head for a minute: If I’m planning to drop a single in a week, what better way to promote it than nab all the headlines and get the whole world talking — about me. What is the most outrageous thing I could say to shock everyone? Oh, right, come out in support of Donald Trump. That’ll do it!"

Lahren's Kanye criticism also got her into an intramural back-and-forth with Candace Owens, the black pro-Trump figure that has met with Kanye, visited TMZ with him, and probably gained the most from his recent tweets.

Owens tweeted on Wednesday night, "I would call out @TomiLahren for hating on Kanye, but she blocked me." Lahren then responded, "Let’s agree to disagree. I respect your opinion and agree with most of what you say. We differ on this. That’s fine." Owens then came back with an ominous message, "Let’s not. You and I both know what this is actually about. I’ve remained silent on it to spare you the embarassment [sic] but you’re testing my patience."

All in all, the Lahren segment underlines a basic point about how Kanye is being discussed in politics these days. Sure, there are a noticeable number of conservatives and Trump supporters who have had fun with Kanye's recent show of love for the president — for reasons that range from the fact that he's caused a "freakout" among liberals, to an actual hope that he can draw support from people who otherwise wouldn't be attracted to Trump. But, there are others who have warned against embracing Kanye's politics from the start.

Their argument is simple: Just because people with a lot of attention are saying things that hurt your political opponent doesn't mean they're worth embracing. It's genuinely a good point to make, and definitely applies to Kanye West, just as much as it'd apply to someone who compares Black Lives Matter to the Ku Klux Klan.