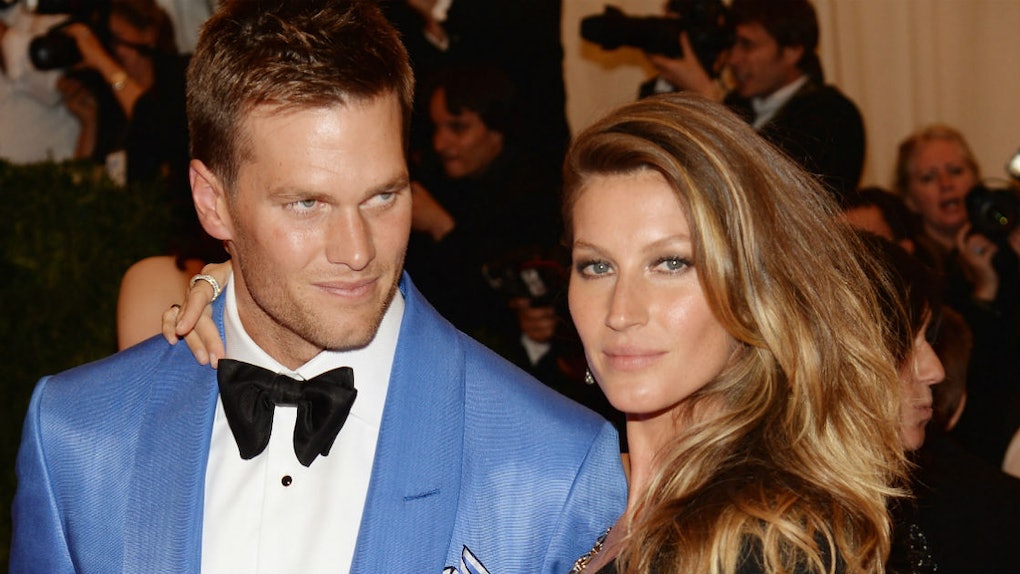 Tom Brady got a little... um... graphic on Instagram. Barstool posted a meme to its Instagram account on June 27 that showed one hippo biting another hippo's butt with the caption, "As soon as bae gets out of the shower #AssEatinSZN." First of all, sweet Jesus. Second of all, wait until you see what the Patriots quarterback decided to chime in. Tom Brady's comment about Gisele Bündchen on Barstool's Instagram has me shaking in my boots while simultaneously staring at my journalism degree and crying. (Four years and thousands of dollars all to write articles about #AssEatinSZN. Lord, give me strength.)

Brady commented on the post with three crying laughing emojis and a swift, "yep," and people in the comments section are shooketh. Listen, I am all about body and sex positivity, but I did not wake up this morning thinking I would be writing about Tom Brady and Gisele Bündchen's favorite bedroom activities! More power to them, but I could have lived my entire life without seeing this comment. Curse you, Barstool!! People in the comments section couldn't believe their eyes and left comments for Brady like, "it's stuff like this that makes it hard to hate you," "Christ 😂," "that’s my quarterback... *tears of happiness," and "defense slayer at day, ass eater at night," and I'm officially ready to quit the internet forever.

Oh no. Oh god. Oh no. People can't stop bringing up the fact that he kisses his son on the mouth. Please, someone, make this thread stop.

Let's just say we all didn't need to know about this personal part of Brady and Bündchen's marriage.

Let's just talk about their marriage in general instead...

Brady and Bündchen have always been open about how open their relationship is. Brady once told Details that his social life improved because of his wife. He said,

I think my wife and I, we probably enjoy staying home more than most… I’m glad they didn’t have those camera phones seven or eight years ago [referring to his wilder single days]. When I go out now, I just watch what I’m doing.

He said she helped him mature his social life a lot, but an intentionally immature thing he admitted to doing is throwing pretend temper tantrums when he feels like he's not getting enough attention from her. Uh... cool? He said in part of his Man Of The World magazine Fall issue in 2014,

I like attention from her, so when I’m not getting it I let her know in immature ways, like a young, immature child would. You throw fits and you pout and you whine until you get what you want.

When he's not throwing fake (or so he says...) temper tantrums in order to get his wife's attention, he's actually doting on her and admiring her career. On April 16, 2015, Brady took to Facebook to congratulate his wife on completing her final runway show. He said,

Love to see all of this love and support! But we all know what I could have lived without seeing today. Goodnight, and good luck.