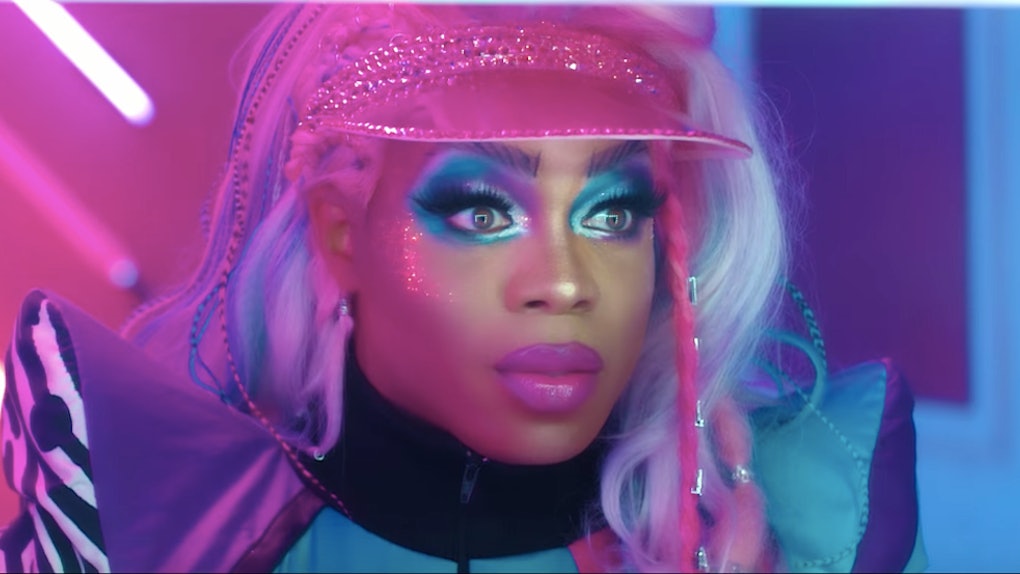 Todrick Hall's Comments About Being Unapologetically Out Are So Important — EXCLUSIVE

If you don't know about Todrick Hall, you're missing out on a hell of a talent. Hall is a singer, director, choreographer, dancer, Broadway star, drag queen, songwriter, and a lot more things that will take too long to list. Suffice it to say, he stays busy. With impressive credits under his belt — like oh, I don't know, choreographing for Beyoncé — there isn't much he hasn't tried. One recurring theme of Hall's music is creating tracks that are deliberately written from a queer point of view, and his new "Glitter" video is yet another celebratory addition to his repertoire of LGBTQIA anthems. Todrick Hall's comments about being unapologetically out throughout his career make for a powerful statement in the "Glitter" video.

Hall and I are in Brooklyn, NY, sitting on the set of his "Hey Google, it's showtime" video he created with Google Assistant when he tells me the inspiration behind the queer stories he tells in the songs on his albums. "I just wanted an anthemic song to just remind people that it's OK for them to be crazy," he tells me.

Sometimes we try too hard to figure out what people need, as opposed to putting out things that we artistically need for ourselves as artists and as humans.

His last two albums (Straight Outta Oz and Forbidden) are concept albums that give fans insight into Hall's experiences as a gay black man in America. Where Straight Outta Oz uses The Wizard of Oz as a storytelling vehicle for his experience growing into his sexuality and identity, Forbidden aims to teach a lesson to viewers about race relations and the LGBTQIA experience in America. It takes racism and homophobia and flips it, providing a visual example of what it would look like if queer people of color had all of the privilege and straight white people were deemed "the other."

Both albums are stacked with songs specifically about Hall's personal life as well as songs he feels can be used as universal anthems for the queer community. "Glitter" is the newest addition to that list of anthems.

"I've been an out person for a long time, but I think being really, truly proud of where you are as part of the LGBT community goes in stages," he tells me. "It starts, I feel, when you come out of the closet and are truthful with your friends and loved ones about who you are. But I don't think it ever stops." Hall continues,

Hall teamed up with Google Assistant to create the "Glitter" video because of how streamlined he feels the technology makes his creative process. He tells me that Google helped him create this video seamlessly, since the company has always been several steps ahead of the rest in terms of using technology to make peoples' lives easier.

"Sometimes you feel like, as a person who lives such a crazy, extravagant, ostentatious life, that some of these tools that people use to help their lives don't apply to you, can't help you," he says. "And so, for me, it's really cool to see that even if you're a drag queen on the go and you're getting ready to put on a show and entertain people every night, or you're a performer, that Google Assistant can be just as helpful for you as it could be for any person on the planet."

And Hall knows just a bit about what it takes to create a music video, considering Straight Outta Oz and Forbidden were released as full visual albums clocking in at about 1.5 hours each. He tells me it only took him a matter of weeks to create both of those visual albums, from writing all of the songs to wrapping on the final piece of post-production for the films. It takes most singers years to create a full album, and that's not even including the music videos. Like I said, Todrick Hall stays busy.

He writes all of his own songs, choreographs all of his own videos, directs, and produces his visual albums, but longtime fans of Hall know this already. After a short stint on American Idol, Hall rose to internet fame on YouTube creating videos like the Disney villain-inspired "Cell Block Tango," fittingly called the "Spell Block Tango." He's also the man who made all of those epic Beyoncé, Taylor Swift, and '90s hits mashup videos you love to watch on loop.

While he spends a lot of time writing songs and making videos that he hopes can be used as anthems for the queer community (his songs "Boys Wear Pink," "Dem Beats," and "Low" come to mind), Hall tells me he's always surprised to learn that the songs he writes about the deeply personal (and often painful) experiences of his life are as equally relatable — and not just to gay men.

"Not very ironically, those are always the songs that the audience and my fans and followers and family and friends also identify with and click with the most," he tells me. "I think there's a way they can tell the song meant a lot to me, and usually there's somebody out there going through a similar experience in their own way."

He tells me that when he made the conscious decision to be unapologetically out in his music, he initially thought that only queer people of color would be able to relate to his more personal tracks. "Whenever I came out, I was like, 'This is going to be such a great message for any kid who looks like me, who's a person of color, and who's LGBTQ,'" he says. "But a lot of girls that identify as completely heterosexual watch my videos and they say, 'You singing this and dressing up this way still gives me the same confidence that it would probably give somebody in the queer community.'"

He continues, "And I think that it's so odd that sometimes we have been, 'we' as in the queer community, have been put into such a box but then we also put other people into a box."

Hall speaks with pride (and a little bit of surprise) as he tells me how happy he is to know that people of all walks of life feel seen when they hear his more personal lyrics. (He mentions the song "Type" from Forbidden as an example.)

But as his good friend Taylor Swift knows, the more nuanced a song's lyrics are, the more people connect with the material and can see themselves in the story. Being able to convey your most personal feelings in a way that not only makes sense to listeners but also makes them feel like the song was written for them is no easy feat.

"They're really excited about the fact that this music inspires them and helps them feel more free and more themselves," he says. "In my mind, I don't understand how they don't already feel free or how there's anything I can say from my personal history, my personal life experiences, that would even be able to help them from where they're coming from. But it absolutely does."

Basically, Hall thought, being a gay black man, that he wouldn't have anything to teach to people who didn't look like him, but he finds inspiration and an even stronger sense of community with his fans now that his experiences have been validated as universal feelings.

"I've learned that if I feel something, just put it out there and not try to worry about what audience it's for," he tells me, "because there's so many millions of people out there that are looking for things that really appeal to them and can really help them and change their lives."

He continues, "I think sometimes we try too hard to figure out what people need, as opposed to putting out things that we artistically vibe with and that we need for ourselves as artists and as humans. And sometimes you're putting out something that is so specific but so needed for someone else going through something similar, but in a completely, almost Stranger Things-esque upside down world type of situation. "

So take Todrick Hall's "Glitter" as the song you can always go to to celebrate wherever you are in your life. You could have just gotten your heart broken, or you could have just fallen in love. You could be newly out and figuring out what that means for you, or you've been out and proud for years. Whatever your truth is, whatever part of the rainbow spectrum you're at, you're living and learning and being unapologetically you while you're doing it. And that is worth celebrating. Throw some glitter around while you're at it.