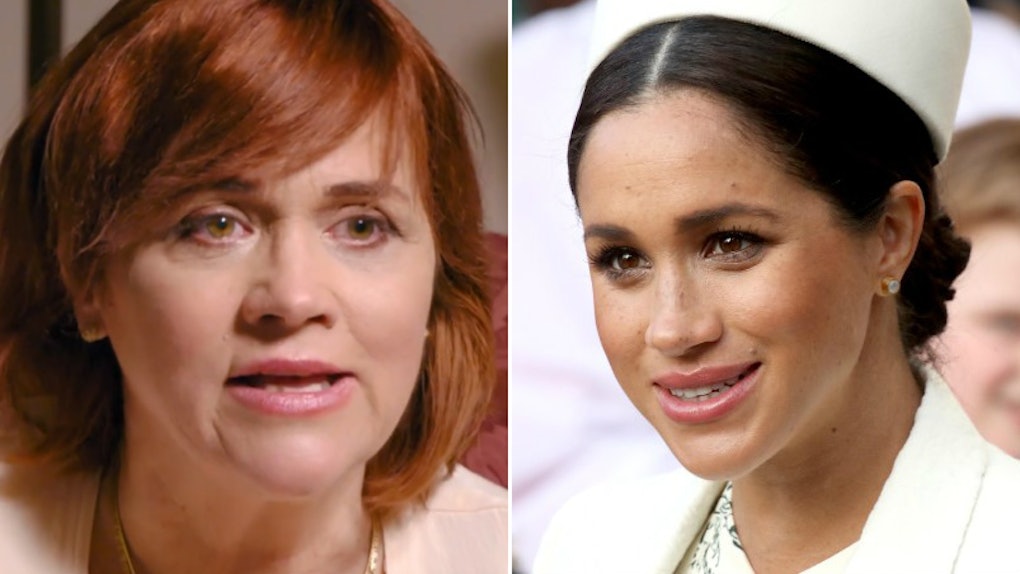 When it comes to being shady, Meghan Markle’s family seems to know no bounds. In TLC’s Meghan and Harry: A Royal Baby Story trailer, you can see Meghan’s sister, Samantha Markle, making some not-so-nice comments about the Duchess of Sussex. Her comments highlight just how deep the rift in this family truly is.

As you’ve probably already guessed, TLC’s Meghan and Harry: A Royal Baby Story is all about the royal baby that’s due to be born in the coming weeks. The special, which will air on Tuesday, April 9, will cover everything that’s happened during Meghan’s pregnancy. From the announcement of the pregnancy in October 2018 to how Meghan’s supporters feel about the baby, the show is set to explore every aspect of what it’s like be an expectant mother under the intense scrutiny of the media. And, of course, that means TLC will be rehashing some of the drama Meghan has had to face thanks to her dad, Thomas Markle, and her sister, Samantha.

Samantha is actually featured in the trailer for the show and shares her sentiments on the drama between her and Meghan. "You can't hurt people like this and then turn around and flip the script and play victim," she says.

It’s hard to know what exactly she’s referring to here, but since she frequently says negative things about Meghan, it’s probably safe to assume that she’s implying Meghan has hurt her family. Plus, her comments in the trailer echo some things she’s said in the past.

For example, back in August 2018, Samantha suggested that Meghan’s lack of contact with her family has hurt their father, Thomas.

“I speak to him [Thomas] every day and it’s sad but, no, they [the royal family] have not contacted him. There is no meeting planned, that is PR spin,” Samantha said in an interview with The Sun. “The PR machines can stop trying to make out she’s [Meghan] making an effort — she is not. This is a heartbreaking time for him and I’m very sad watching my sister ignore him.” Elite Daily reached out to Kensington Palace at the time for comment on Samantha's claims but did not hear back.

Samantha also suggested at the time that Meghan couldn’t possibly be the humanitarian she claims to be. She claimed that humanitarians “work towards resolve and peace. But my sister disposed of the entire family. There is no way to candy coat something so foul,” she said.

So, what Samantha says in the trailer for TLC’s special really isn’t a surprise and it’s not very far off from things she’s said in the past.

Luckily for Meghan, though, lots of other folks, like former Ladies of London star Juliet Angus, participated in TLC’s special and had lovely things to say about Meghan and her impact. And that’s great because viewers will get to hear from both sides.

Howard Lee, TLC’s president and general manager, said he was thrilled to bring this special about Meghan’s pregnancy to viewers. Lee said in a statement,

As the home of all things wedding, all things royal and all things family for viewers in the U.S., it makes perfect sense for TLC to follow this next generation of royals as they journey into the joys of parenthood. We're excited to bring this special to our passionate fans.

All in all, it seems like TLC’s royal baby special will be a positive effort even in spite of Samantha’s comments.