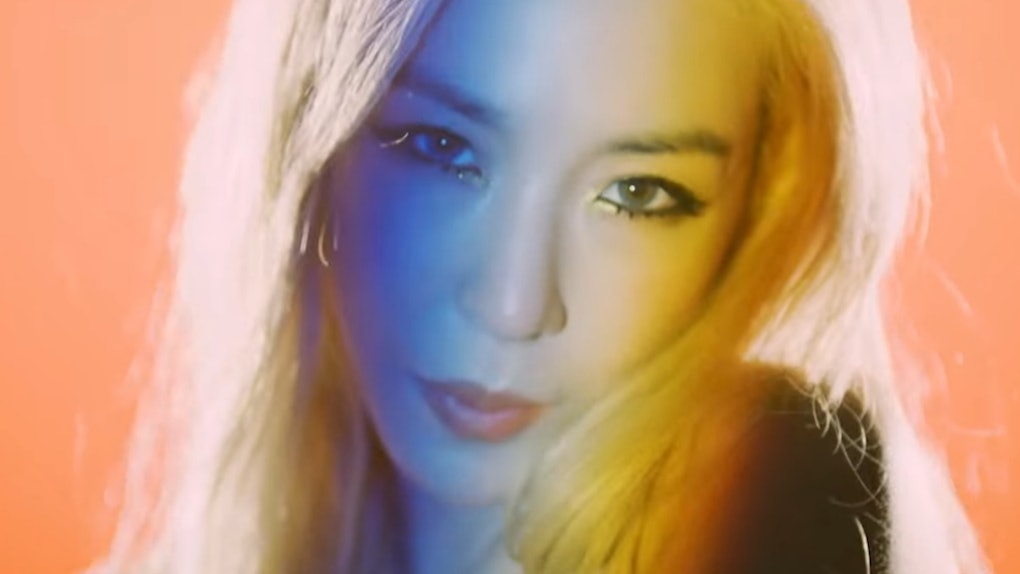 Some might say there are two sides to Tiffany Young. You see, for the past decade, as a member of Girls' Generation — one of the most popular K-Pop girl groups ever — Young spent most of her time in Korea known mononymously as "Tiffany." After deciding not to renew her contract with the group's agency SM Entertainment in 2017, Young moved back home to the United States (she's from San Francisco) to reintroduce herself to the world — this time as solo artist, Tiffany Young. As an Asian-American woman, Young happily embraces the "K-Pop" title because it's a part of who she is. Tiffany Young's quotes about embracing K-Pop in her solo career are so inspiring, because rather than keep her past and present identities separate, Young hopes to bring her worlds together and further close the gap between K-Pop and American mainstream music listeners.

"For me, it's always been about bridging worlds," Young tells me in an interview with Elite Daily. "I grew up here in California, and now that I'm back here, I hope I can be a bridge and merge both worlds together."

Before her stateside solo debut in 2017, long-time K-Pop fans knew Young already. She was only 18 years old when she debuted with Girls' Generation in 2007. Their breakthrough came in 2009 when they released their single "Gee," which Billboard called "one of the most iconic Korean pop songs ever." Following "Gee," the group went on to release even more hits, such as 2010's "Run Devil Run," 2011's "The Boys," and 2013's "I Got A Boy." While most people would be embarrassed about their teenage years, Young looks back at her time with Girls' Generation with appreciation.

"I was just learning a lot of the things on the way," Young says of her time in the group. "I'm still learning new things now on a different side of the world, but the big difference is that my goals are set to really stay focused and bridge both worlds and the message on representation."

Young has definitely continued representing K-Pop stateside since going solo in 2017. In October 2018, she became the first female K-Pop artist to walk the American Music Awards red carpet, and then in March of this year, she attended the iHeartRadio Music Awards, where she won Best Solo Breakout.

On Aug. 25, Young had the opportunity to attend the D23 Expo as part of her collaboration with Disney for their "True Original Summer of Music” campaign. Apart from singing her newest single "Magnetic Moon" at the expo, Young also performed a Korean version of "Can You Feel The Love Tonight" from The Lion King. Watch the magical performance below.

"I am so honored to be able to bring a Disney classic to life in Korean and in America at the same time," Young says. "To be at a time where it does not matter what the language is that we are all communicating and singing from the heart...it gets to me to be able to do that on stage."

Young's collaboration with Disney is a perfect example of her worlds colliding, because she's always been a huge Disney fan.

Now that Young is releasing music on her own, she's been given more opportunities to experiment with her sound.

"I'm still taking baby steps, but I feel excited every day to change and do something unexpected," Young reveals. "I want to continue to do something extravagant and experiment more and more."

Young has received a lot of support in her solo career from Girls' Generation members, whom Young calls her "sisters."

"I would not have been here without the support and encouragement from my bandmates. They are the most supportive," Young shares. "I feel very blessed." Actually, Young celebrated her 30th birthday with all of her bandmates on Aug. 1 while she was in Korea for her “OPEN HEARTS EVE” concert.

As for the future, Young feels optimistic that the best is yet to come for her musically. Young admits she loves the term "30 and thriving" because she thinks her thirties will be all about discovering herself even more. In turn, she will channel her personal experiences into her music.

"[I'm] getting to know myself so that I can give more of myself," she says. "I feel like with each release, I've been able to open up my heart and my mind even more. I'm here to stay. I'm here to let the world know that Tiffany Young is here and Tiffany Young wants to continue to empower and celebrate others to celebrate each other."

And throughout her solo endeavors, Young will continue to proudly represent K-Pop. "It's so beautiful to see Korea and K-Pop all over the world," she says. "With what I'm doing with this new chapter of my career, I hope I can continue and contribute to this wonderful, wonderful genre."