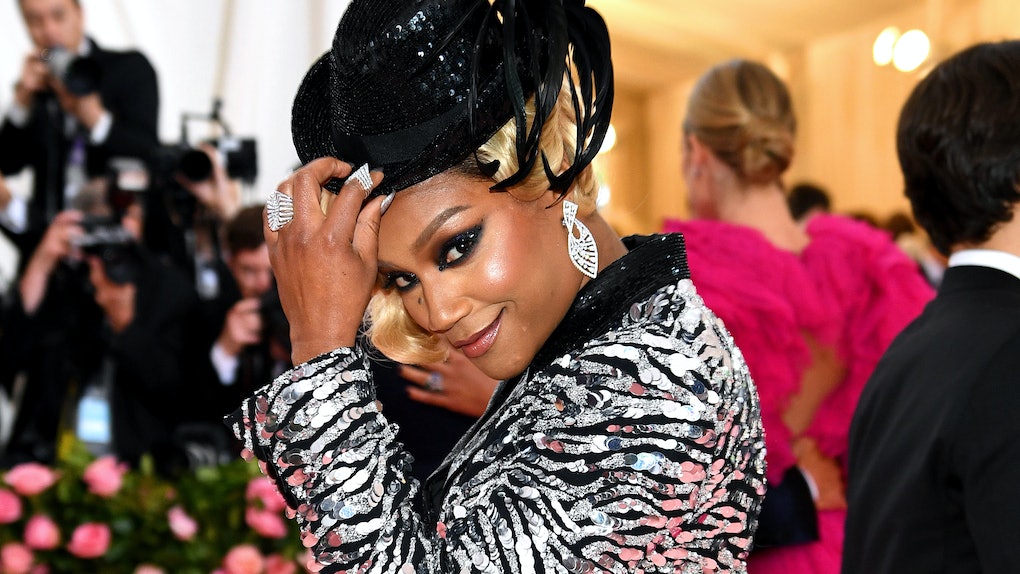 Tiffany Haddish Brought Chicken To The 2019 Met Gala, Because "She Ready!"

My new Met Gala icon is Tiffany Haddish, and I will fight anyone who tries to tell me otherwise. Tiffany Haddish brought chicken to the Met Gala, just in case the event didn't have enough food. And I've never related to anything more.

Haddish showed up in a sequin zebra suit with flared pants and a black hat to match. And she packed food in her bag, always prepared for anything. No matter what they're serving for dinner at the event, she'll be 100% prepared — and everyone else will definitely be jealous. This is reaching a whole new level of extra, and I couldn't love it more. She also showed up on the red carpet with her fun and flirty outfit, and she couldn't stop posing for the cameras.

In an interview with reporters, Haddish opened her bag to show the cooked chicken she was hiding. "Last year I came, it was not enough food, and I was hungry," she explained. "And when I'm hungry, my attitude's not good. So, I said, 'Imma be prepared this year.' And I brought chicken."

She proceeded to explain that she cooked the chicken herself. She also said she was "feelin' cute" and loving her outfit, hair, and smokey dark makeup. I don't know about you, but I am all about a celeb who owns her look but also keeps it real AF. And I feel like Haddish is the perfect example of this!

She even offered the chicken to the reporters, who said it was "still warm" and decided to give it a try. Haddish appeared to be having a great time and having a good laugh at her own expense. And isn't that why we all love her?

Hilariously, Haddish also explained that she had no idea what the theme meant at first. The year's Met Gala is themed "Camp: Notes on Fashion," which Anna Wintour described as being "a little bit fake." Now, honestly, it's a confusing concept for many people, and celebs have shown up tonight wearing everything from a four-part layered hot pink dress to an all-black lace ensemble.

When she heard about this year's theme, Haddish thought it meant "that you wear like a wife beater shirt and some walking shorts," but now she understands that it means "you're glamorous and over-the-top and ready to have a good time." She also said she went "110% in" with her outfit. And with snacks in her bag, she's bound to enjoy her evening no matter what.

Honestly, if I were to show up to the Met Gala, I feel like I'd definitely pack food. In the midst of all the glamorous celebs wearing beautiful designer fashion, sometimes all that's really needed is some good ole' comfort food. Next time I have a fancy event to attend, I'll be sure to come prepared with chicken just in case the food is disappointing. Shoutout to Tiffany Haddish for bringing the relatable content everyone needed (me included), as I sit on my couch in sweatpants watching all the glamour.