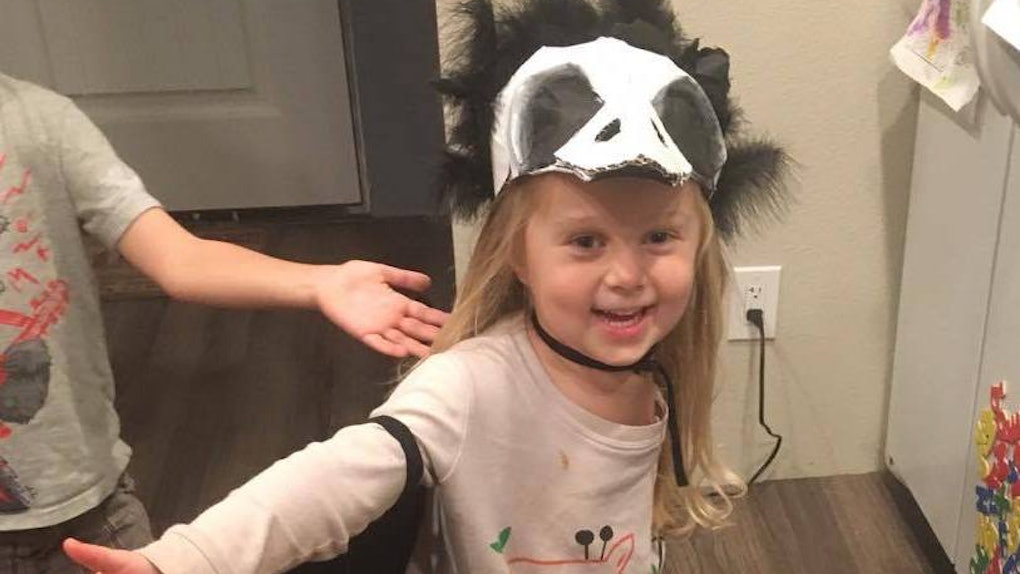 This Young Amputee's Halloween Costumes Will Blow Your Mind

When you're a kid, celebrating Halloween is one of the best times of the year. You get to dress up in a costume that you've likely been dreaming of wearing for months, and then you get to go door-to-door collecting candy by just saying a few words. For Scarlette Tipton, though, finding the perfect costume takes a little more work. Once you see this young amputee's Halloween costumes, though, you'll see that a little effort goes a long way in creating some one-of-a-kind Halloween costumes.

According to ABC News, three-year-old Scarlette Tipton lost her left arm to undifferentiated high grade spindle cell sarcoma (a rare form of cancer) when she was 11 months old. Scarlette doesn't let that hold her back when it comes time to dress up at Halloween, though. With the help of her mother Simone Tipton, Scarlette is able to participate fully in all that Halloween has to offer a young girl like herself.

"I wanted to give her an opportunity to be even more unique than she already is," Simone tells Elite Daily about Scarlette's costumes. Simone set up the Facebook page Smiles For Scarlette and on that page, she shares updates and pictures of Scarlette. With Halloween happening tomorrow, Simone has been sharing Scarlette's past Halloween costumes. Simone has helped her daughter celebrate the spooky holiday by hand-making each of her costumes for the past three years.

Here is Scarlette showing off her doll costume in 2015.

Simone is no stranger to DIY Halloween getups, she tells Elite Daily that she is able to "make all our kids costumes," and with that, Simone "was able to make something [Scarlette] wanted to be." Simone says that hand-making these costumes is totally worth it because it is "an easy way for her to see that she's awesome no matter her differences."

Here are Simone and Scarlette celebrating Halloween in 2015.

Scarlette isn't only the inspiration for these creatively executed Halloween costumes, she also gets a say in the creative process. Simone tells Elite Daily Scarlette "loves Halloween, and she loves spooky things." Simone goes on to say that Scarlette let her know that her first choice for a Halloween costume would be a "spooky guy that scares people."

Here is Scarlette modeling her skeleton costume in 2016.

To help her daughter achieved her desired look, Simone "took her to the Halloween store and let her pick something." From there, Simone tailors the costume to Scarlette's specifications. "I altered it in a way that would accentuate her missing arm," Simone says.

So far, Scarlette has been dressed up as "a doll with stuffing coming out of the sleeve" and "a skeleton with a plastic bone arm."

This year, Scarlette will take to the houses and trick-or-treat for the best Halloween loot in her "dead one-winged raven" costume.

Scarlette looks ready to trick-or-treat this year in her raven costume.

As much fun as Simone and Scarlette have creating these out-of-the-box costumes, Scarlette makes sure to enjoy every aspect of Halloween. Simone tells Elite Daily, "She loves skeletons and cats. So the more decorations, the better!"

It's good to see that Scarlette is enjoying every minute of Halloween, complete with awesome costumes. I'm not sure what kind of candy the Tipton family is planning to pass out on Oct. 31, but it doesn't matter because they've given out something better than any candy bar this Halloween: Scarlette's inspiring story.