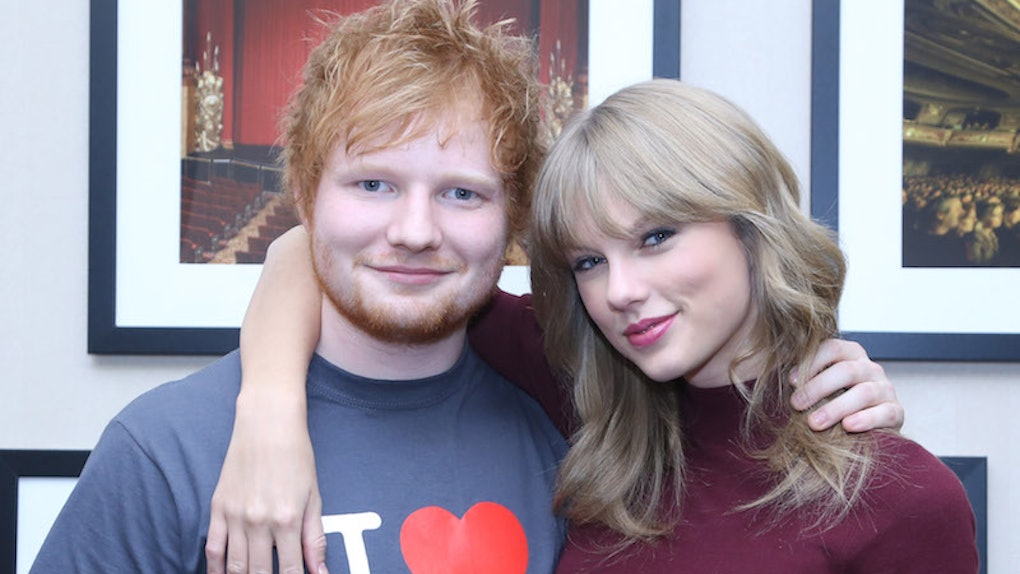 Taylor Swift and Ed Sheeran are good pals. Such good pals, that when the American Music Awards nominations came out on Sept. 12, they were on a hike together and were all like, "Awards?! What awards?! The greatest award is being here with you!" They didn't actually say that... but I feel like it's something Swift would say. Anyway, the video of Taylor Swift and Ed Sheeran hiking together is no doubt going to make fans go "awwww." It's a classic Ted moment (if celebrity friendship names were a thing, they would have a pretty solid one).

Swift, Sheeran, and Drake were collectively nominated for a ton of AMAs this year, and are nominated in a lot of the same categories together. Drake leads the pack with eight nominations, Sheeran has six, and Swift has four, all in major categories like Artist of the Year, Tour of the Year, Favorite Female/Male Artist, and Favorite Album – Pop/Rock. The Favorite Album – Pop/Rock category, in fact, only has three artists in it: Drake, Swift, and Sheeran. In the video of them hiking, Sheeran says, "Hey Taylor, the AMA nominations came out. It's me, you, and Drake." They both say "You're gonna win," at the same time, and then there's a brief pause before they both say, "Drake's gonna win."

"Safe to say whoever wins the AMA for fav pop/rock album will be an artist who writes songs about love and heartbreak," Swift said in her caption for the video. "YOU get to decide who it’ll be."

Camila Cabello actually snagged more nominations than Swift (she was nominated for five). Swift's caption is right: whoever wins in the respective categories they're all nominated under, it's going to be someone who's made a career out of singing about their broken heart.

The 2018 American Music Awards will go down on Tuesday, Oct. 9, at 8 p.m. on ABC with queen Tracee Ellis Ross hosting. Considering all of her nominations and award show history, Swift will probably attend the AMAs this year if it doesn't conflict with her tour schedule.

The most recent award show Swift attended was the Billboard Music Awards on May 20, where she won Top Female Artist and Top Selling Album.

The BBMAs and AMAs are really similar shows in that the nominations are determined by album sales and where the music fell on the charts since its release. Drake, Swift, and Sheeran have been dominating radio and streaming services all year, so their nominations should come as no surprise. If Sheeran does win over Swift or vice versa once fans vote, that's nothing a good little hike can't solve.