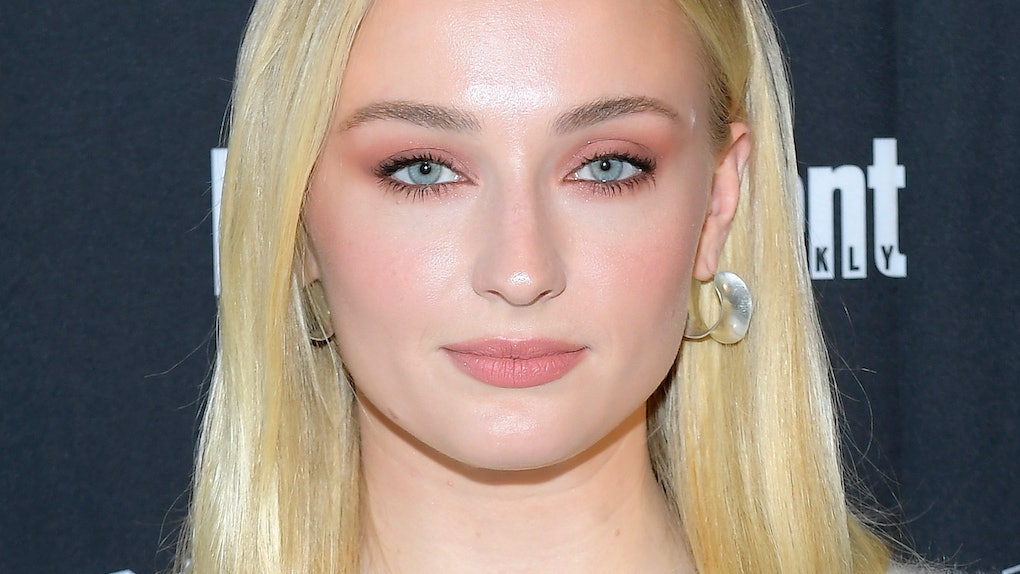 Confession: I don't watch Game Of Thrones. I know, I know, don't @ me. It's been on my to-watch list forever, I swear. I just haven't gotten there yet. But I will now. Because Sophie Turner was a legit legend when she materialized on the Jumbotron at Madison Square Garden on Tuesday night, and I now have a serious girl crush like everyone else in the world. Not only did the actress down a cup of red wine to mad cheers from the crowd, but she also hit a triple dab and somehow managed to make it look cool again. Seriously, you guys, this video of Sophie Turner chugging a glass of wine at a hockey game is a forever mood and I cannot look away.

OK, so Turner was just casually taking in a New York Rangers game with her fiancé Joe Jonas when she caught herself up on the Jumbotron. First, she smiled slyly, then she triple-dabbed, then she threw back her entire glass of red wine while holding one arm up in the air. So dope! When she was finished, the GOT star gave a victorious fist pump to the crowd — which was losing its collective mind — then wiped off her mouth with her bare hand and slid down low in her seat with a smirk like the total boss that she is.

I stan a real queen!

And P. S. the big takeaways here are as follows:

Anyway, Barstool Sports went and posted a video of the instantly iconic wine chug to Instagram with the caption "Send it for the Starks" — a reference to Turner's Game of Thrones character Sansa Stark. And Turner then shared the clip to her own Insta feed, where it's now been viewed over five million times. It's also prompted responses in the comment section from several celebs who all seem to agree on one thing: Turner is officially a legend.

"Wow inspiration for 2020 and beyond," wrote Drake.

And from Rangers forward Brendan Lemieux: "This was awesome."

Meanwhile, Joe Jonas couldn't resist weighing in on his fiancée's epic moment. He rolled up to the Barstool Sports post on the 'gram and left a cute sunglasses emoji in the comment section. Turner's brother-in-law-to-be — that would be one Nick Jonas — dropped by, too. And the always on-point @commentsbycelebs Instagram account documented the whole awesome exchange:

Of course, Twitter blew up over the iconic clip, as well. Fans on the app called the actress everything from a queen to a national treasure to a "total goddamn boss."

Or, at the very least, I totally wanna get wine drunk with her at a hockey game.

More like this
Sophie Turner Mother's Day 2021 Instagram Showed Off A Very Fitting Ring
By Abby Monteil
Sophie Turner & Joe Jonas' Pics From Their Vegas Wedding Are Such A Vibe
By Cianna Garrison
Is Olivia Rodrigo's "Good 4 U" About Joshua Bassett? Fans Are Convinced
By Michele Mendez
Stay up to date