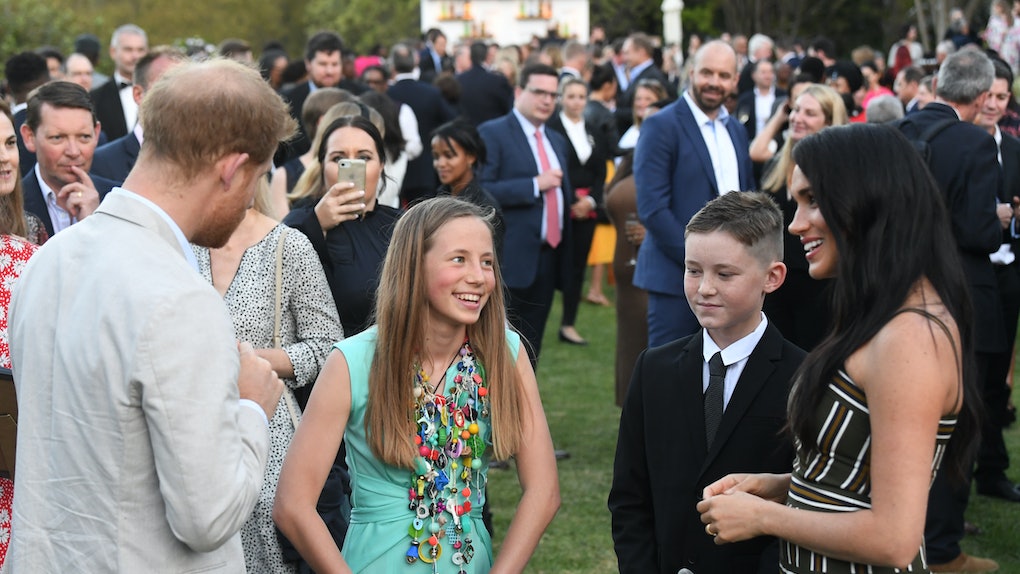 One fan had the ultimate "Cinderella" moment with the Duke and Duchess of Sussex and it was honestly just so sweet and endearing. You have to see the video of Meghan and Harry helping a girl with her shoe if it's the last thing you do today.

Meghan Markle and Prince Harry are currently making their rounds while on a tour of South Africa. During their stop at the residence of the British High Commissioner in Cape Town, the royal couple took part in a reception held in honor of young people, community, and civil society leaders, according to Entertainment Tonight. Meghan stopped to chat with Point of Light recipients Jade Bothma and Hunter Mitchell before Prince Harry decided to join his wife and speak with the young adults. This is when the gloriously sweet moment occurred.

Bothma turned to speak with Harry and simultaneously stepped out of her shoe. Slides will do that to ya, but luckily the Duke and Duchess of Sussex were on hand to help the girl out. Markle, without missing a beat, leaned over to help Bothma maintain her balance. Markle even sweetly calls the situation a "Cinderella moment" as Prince Harry leaned in to help Bothma get her shoe on. It's a truly magical moment. Not many ⁠— or really anyone ⁠— can say a prince and princess helped them get their shoe on. Baby Archie Mountbatten-Windsor will be able to one day, but offspring are an exception.

Anyway, take a look at the incredibly charming moment below:

The Instagram account @HRHofSussex, which is dedicated to daily Meghan Markle news, loved the moment so much the account posted the video twice, but from two different angles. So you could really take it all in, y'know!

Followers of the Meghan Markle fan account couldn't get enough of the fairytale moment and filled the comments section with loving messages and heart emojis.

"So down to earth and sweet. They make everyone feel so special and loved," wrote one fan.

"Ohhhh they didn't hesitate to help," wrote another.

"A real prince was going to put her slipper back on," commented another. Seriously, what a dream.

Prince Harry, Markle, and baby Archie are in the middle of their 10-day tour, which is split between meetings, events, speeches, and activities to raise awareness for various causes they support. On Monday, Sept. 23, Markle and Prince Harry both gave their first speeches during the first stop in Cape Town’s Nyanga township. Markle took the moment to talk about her roles as a wife and mother as well as her African ancestry.

"On one personal note, may I just say that while I am here with my husband as a member of the royal family, I want you to know that for me, I am here as a mother, as a wife, as a woman, as a woman of color, and as your sister,” she said. "I am here with you, and I am here for you."

Markle also encouraged women to fight for “respect, dignity, and equality” after watching young girls take a self-defense class, according to People. Prince Harry spoke on a similar sentiment.

The work Prince Harry and Meghan Markle are doing seriously makes my heart smile. From supporting young women to creating fairytale "Cinderella moments," they are everything. Honestly, I can't wait for what the rest of their 10-day tour will bring. I'm hoping for continued work that'll lead to plenty of happily-ever-afters.