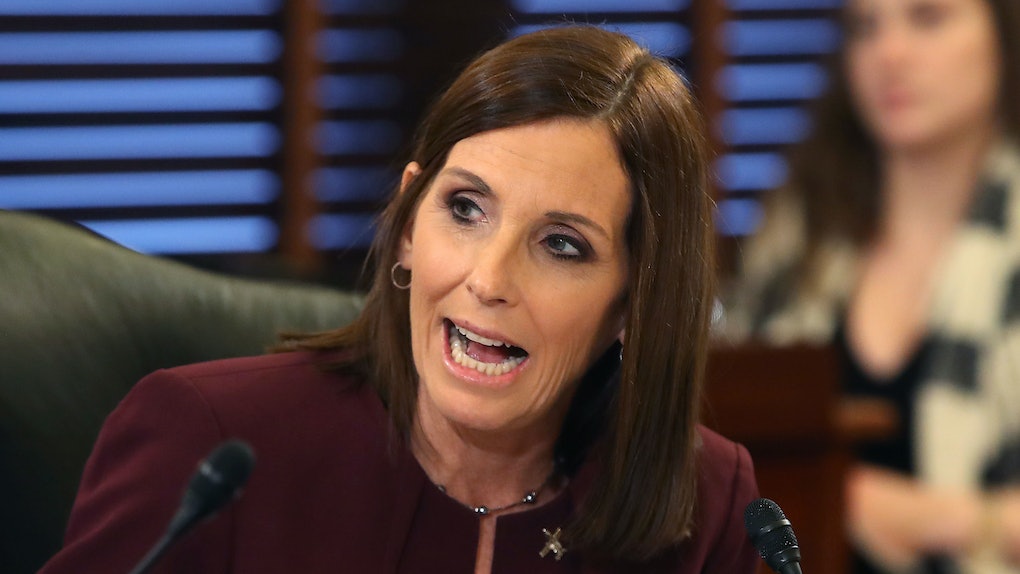 On Thursday, March 7, the Senate Armed Services Committee met to discuss the rampant problem of sexual assault within the military. During this meeting, politicians attempted to find solutions to address this issue, but there was one moment in particular that left the room speechless. This video of Martha McSally speaking out against sexual assault in the military will not only move you, but inspire you to take action.

While attending the Senate Armed Services Committee meeting on March 7, Arizona Republican Sen. Martha McSally addressed her peers about her experience serving in the Air Force. While speaking, McSally revealed that she had been sexually assaulted numerous times and even raped by a superior officer while serving in the Air Force. She did not name her alleged assaulter.

"So like you, I am also a military sexual assault survivor," McSally told a hushed Senate room.

McSally went on to say that she felt "powerless" in the situation when the individuals abused their position of power against her. She continued to detail her experience by stating she never reported the assaults because she "didn't trust the system at the time." However, years later, McSally said she did share her experience and was "horrified" at how it was handled.

"I almost separated from the Air Force at 18 years of service over my despair," McSally said. "Like many victims, I felt like the system was raping me all over again."

McSally's testimony was the most chilling moment of the subcommittee hearing, and the silence among the room proved it.

According to her website, McSally flew 2,600 flight hours, 325 of which were combat hours, and earned six medals for her service.

McSally is just one of many who claims she was sexually assaulted while serving in the military. According to a 2017 fiscal report from the U.S. Department of Defense (DOD), there has been an increase in reporting sexual assaults within the military. During the 2017 fiscal year, the DOD received 6,769 reports of sexual assault "involving service members as either victims or subjects of criminal investigation," per the report. This marks a near 10 percent increase compared to the 2016 fiscal report, where only 6,172 reports were made. Elite Daily reached out to the Department of Defense for comment, but did not immediately hear back.

While these reports prove that more individuals are stepping forward to share their stories, there's still a huge problem of sexual assault survivors not reporting. According to a 2015 study from the RAND Corporation, 52 percent of active-military women believed they received "professional or social retaliation" after reporting a sexual assault. This not only puts these women's careers in jeopardy, but also their safety, which makes reporting cases of sexual assault even harder for survivors.

Discussing sexual assault is never easy, especially for survivors. However, as long as there are brave women like Sen. McSally, the conversation won't be stopping anytime soon. Stand up, and speak out.

More like this
5 Women & Femmes Working To Destigmatize Sex Work On Instagram
By Caroline Colvin
These Tweets About The Bidens' Photo With The Carters Ask A LOT Of Questions
By Rhyma Castillo
These Songs About Friendship Between Women Are Empowering AF
By Sydney N. Sweeney
Stay up to date