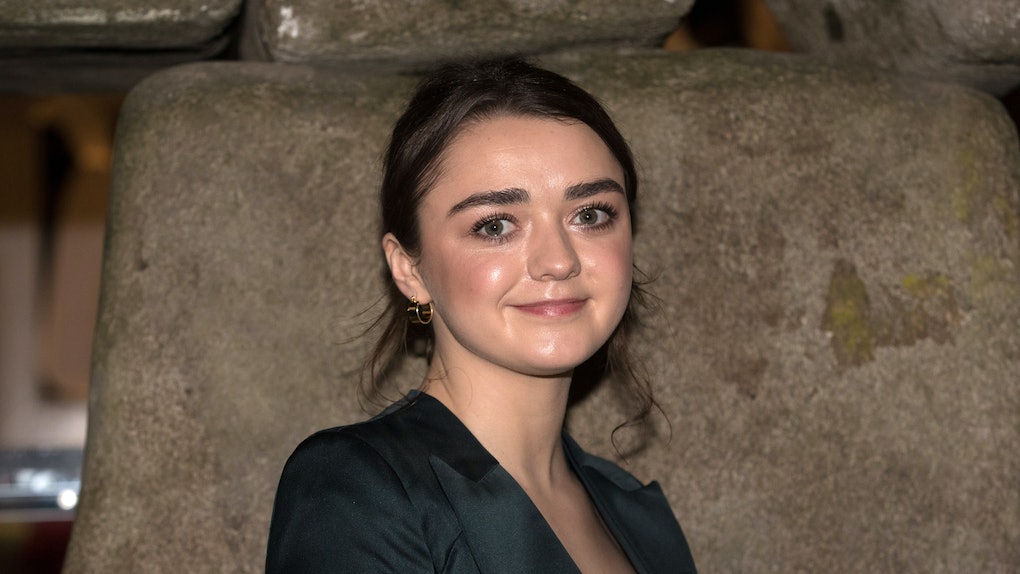 Is it getting sweaty in here or is it just us? The always adorable Maisie Williams aka Arya Stark made an appearance on BBC Radio 1, but it wasn't your typical celebrity Q&A. She partook in Nick Grimshaw's nerve-wracking, yet hilarious Heart Rate Monitor Challenge, where was had to answer questions while hooked up to a — you guessed it — heart rate monitor. Naturally, Nick (and a special guest) attempted to squeeze out spoiler info about her HBO hit. Maisie Williams' Game of Thrones finale reactions had us biting our nails, but did she actually give anything away? Let's find out what her heart revealed.

Before things inevitably turned to GOT, Nick grilled Maisie (who was sitting in a hospital bed, because this sketch requires commitment) in matters of lust — being "madly in love" with Pedro Pascal, her thoughts on Kit Harington's abs, and how she feels about boyfriend Ollie Jackson. Ollie even chimed in with an embarrassing story that involved Maisie and a hotel room and her friend Bill Milner brought up the tale of how she once drunkenly tried to steal a sign from a pub. Good stuff. But then things got interesting... cue the Game of Thrones theme song!

Nick enlisted Oscar winner and Maisie's co-star Eddie Redmayne to come in with the million dollar questions and he (dressed as a doctor, of course) wasted no time in attempting to get some finale scoop. "Oh, yeah," quipped Maisie with a grin after being asked if she knew how it all ended. Again, adorable.

Then Eddie suggested some possible endings to see what they could glean from Maisie's reactions. We got nervous just watching her. When Eddie inquired if her "character ends up bossing it as Queen of the whole Seven Kingdoms," her heart rate mysteriously slowed down. Then he went on to put out the scenario that "the White Walkers kill everyone and have a big old party." This was met with a slight smile and no heart rate spike. Finally, he proposed that Arya "and Hot Pie become a thing, get it on, have kids, the full works." Maisie's response was priceless — she broke out into laughter, but her heart rate did go up... Hmm.

Game of Thrones' final season isn't set to premiere until 2019, but the cast is already getting ready to bid the show adieu. Maisie might know how everything wraps up, but as previously reported, there could be multiple finales floating around. "They’ve written a number of different endings," Emilia Clarke revealed to The Telegraph in December. "So none of the cast know what the actual ending is. If there’s ever a leak of any kind, don’t believe it because it’s probably not true."

Maisie recently opened up about what to expect, admitting, “It’s either going to be everything that everyone dreamed of, or it’s gonna be disappointing." Will fans be satisfied? “It depends which side of the fence you’re going to sit on. I think no matter what you do there’s definitely going to be that divide," she confessed to the Radio Times.

We're already preparing to say goodbye to our beloved Game of Thrones, even if we have to wait a year for new episodes. In the meantime, it looks like the cast will have to spend the majority of their future interviews trying to dodge giving away spoilers. Good luck, guys. We know it can't be easy to live with secrets of that magnitude.

More like this
This 2021 'Game Of Thrones' Season 8 Trailer Is So Confusing... & So Good
By Ani Bundel
Who Did Emily Poison? 'The Handmaid's Tale' Season 2 Is Off To An Intense Start
By Ani Bundel
In 'Riverdale' Season 5, Toni Topaz Is The Black Superwoman Without A Cape
By Erika Hardison
Stay up to date