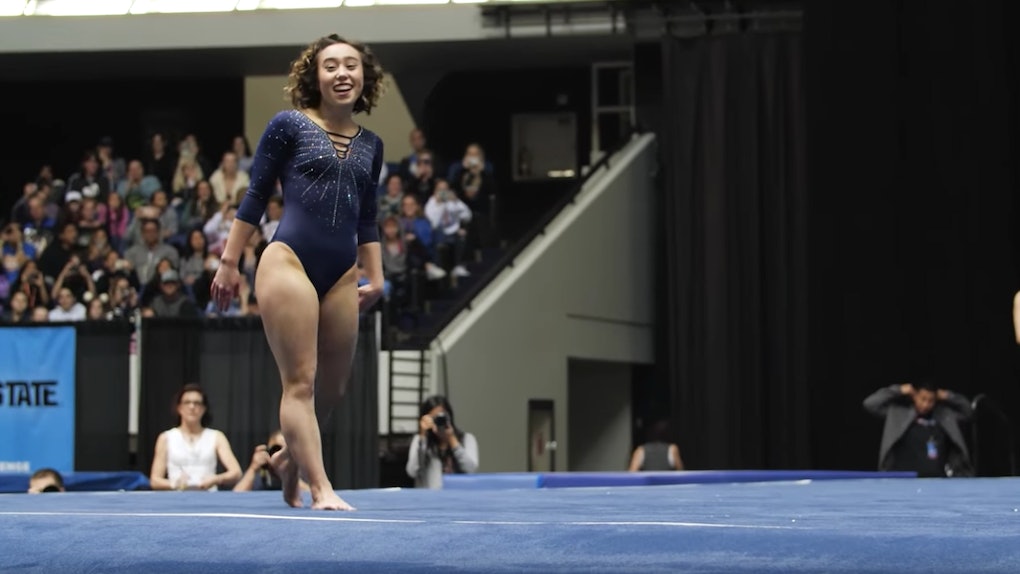 On Saturday, Jan. 12 the Anaheim Arena in Anaheim, CA hosted the 2019 Collegiate Challenge for women's gymnastics. The UCLA gymnastics team competed alongside the UC Berkeley, UC Davis, and Michigan State gymnastics teams. During the event, one student athlete stood out in particular — UCLA's Katelyn Ohashi. So stop what you're doing and prepare for this video of Katelyn Ohashi's gymnastics floor routine to give you chills.

Ohashi's one-minute-30-second floor routine left the audience in Anaheim Arena cheering loudly on Saturday and earned the college gymnast a perfect 10. People quickly noted some of the outstanding elements of her floor routine, including her incredible dance moves, her positive and high energy moves, all the intricate flips, kicks, and tumbles, the upbeat music selection, and her perfect landings. The UCLA Gymnastics Twitter account posted a video of her entire routine the day after the event and wrote, "A 10 isn't enough for this floor routine." The Twitterverse soon started to take note of Ohashi's incredible talent, with replies like this one from Twitter user @MeaghanJoynt who wrote, "Best floor routine I have ever seen" or this one from Twitter user @Saraurora who pretty much wrote what we're all thinking: "HOW." The video garnered over 88,000 retweets and over 377,000 likes in one day, which honestly feels underwhelming once you've seen this video yourself.

But don't take it from me. You have to watch the breathtaking performance yourself.

The video circulated far and wide and even reached people like California Sen. Kamala Harris, who tweeted "This is just fantastic. Congratulations," and comedian Chelsea Peretti who tweeted "why did I cry." Same.

If you need to see it in wide-screen? I don't blame you.

With the help of Ohashi and her teammate Kyla Ross, who scored a perfect 10 on the uneven bars, UCLA won the 2019 Collegiate Challenge with an overall score of 197.00. According to UCLA Athletics, this was Ohashi's sixth career perfect 10 and helped UCLA score a team floor total of 49.700, the fifth-highest score in the history of the school. Ohashi also competed in the balance beam event where she scored 9.975.

Ohashi, a Seattle native, has several other career highlights and accomplishments listed on her UCLA bio, including 2018 NCAA Team Champion, 2018 NCAA and Pac-12 Floor Exercise Co-Champion, and four-year USA National Team member. But Ohashi's gymnastic journey hasn't always been easy. In a Players' Tribune video called "I Was Broken," Ohashi explained that she used to be an "Olympic hopeful" until persistent injuries made her decide to remove herself from the elite level. She also described various stressors she felt during her years as an elite athlete, from pressure she received from her fans to the pressure she put on herself when she felt that she had slipped up in terms of what she ate or how her body looked.

But about halfway through the video, Ohashi explains how she became enthusiastic about the sport again. She said, "it took me finding Ms. Val and UCLA and having a different goal and path to follow, to finally find joy and love within the sport again."

Her honesty and candidness about the journey she's been on along with the pure positivity Ohashi radiates in the video are moving fans to love the gymnast even more. As if we all needed another reason to be impressed.

More like this
These Memes About Being "Cheugy" Include Some Hilarious Realizations
By Cianna Garrison
Is Twitter Crop Gone? Here's What To Know About Posting Photos
By Cianna Garrison
Why Don't I Have Twitter Spaces? Here's The Deal With The Audio Rooms Feature
By Lara Walsh
Stay up to date