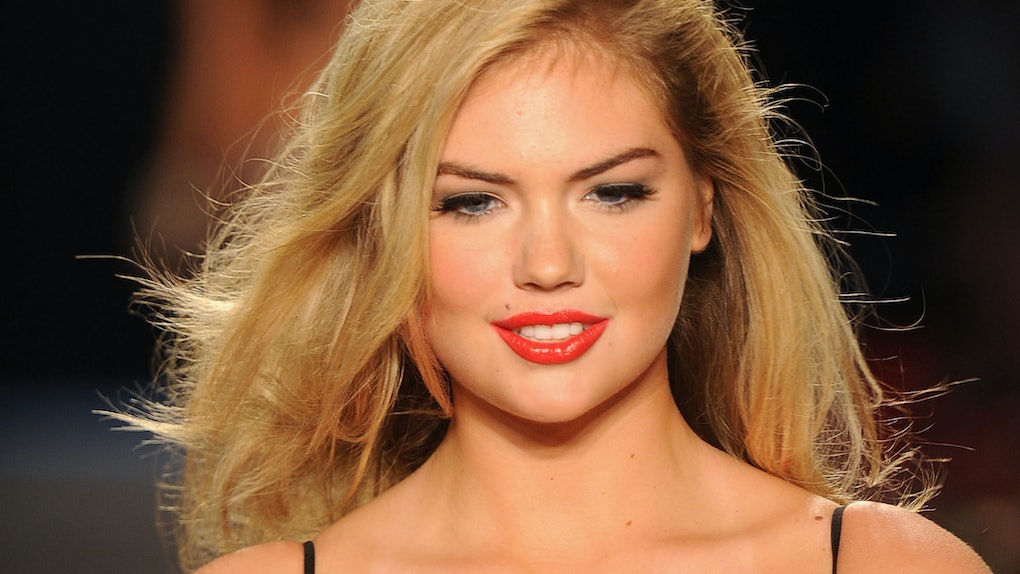 I'll be the first to tell you I have truly no idea what goes into being a swimsuit model. I assume it's a lot of oil. It looks like it involves lots of sand, lots of body makeup, and probably many, many trips to the wax salon. It apparently can be dangerous, too. If you don't believe me, please consider this video of Kate Upton falling off a rock into the crashing water below her. It's... hilarious? Terrible? Just life? Probably all of the above.

Upton was posing for her spread in the 2018 Sports Illustrated Swimsuit edition just as she's done many times before. This year, part of her photo shoot involved climbing to the top of a jagged water rock and posing like a half-naked peacock. Upton was glowing in a golden tutu and nothing else, when Mother Nature said, "It's a no for me." In the video, you can hear production staff warning Upton of the incoming wave, but she's too focused on slaying. In the blink of an eye, Upton slides off the top of the rock, bounces off the rough edge, and hits the water.

My favorite part is the person in the background shouting, "Sh*t! Sh*t! Oh my God!"

The vision for the photo was definitely a hero shot. Ya know, the long skirt with all the tulle flowing in the wind with the water coming up. Very Little Mermaid. And I really saw the vision for the photo, but as I climbed on the rock I did look down and was like 'This is gonna end badly.'

She also said that from her point of view, the waves didn't look as big as they really were.

I saw the next wave coming and it didn't look that large from my point of view, but it must have hit the rock just right... I was able to push off the side and fell into the water below. And, literally sat there for a moment and laughed. My adrenaline was going. I survived, and I felt like I was laughing in the face of death.

She added, "Looking back, that probably should have been a moment when they photoshopped me on there. But we didn't, cause we never do that."

Though the fall looks pretty funny from this angle, just think what would have happened if a literal supermodel hit or scratched her face! She also happened to handle the whole thing super gracefully, especially considering she did it without a shirt on.

The new swimming rules are: Wait 30 minutes after eating before getting in the water, and don't swim in a tulle skirt.

Despite the rough day on set, Upton's shots came out gorgeous. She has a beautiful series of photos rocking other fascinating little bathing suits that include gold fringe, a black geometric cage thing, and purple lace details.

Sports Illustrated Swimsuit editor MJ Day once spoke about Upton in 2017 and what she feels she's done for the beauty industry. Most noticeably, she noted how she almost never takes a bad photo.

Day said, "That’s a testament to the power of Kate and what she’s done and how she’s changed the perception of beauty and the doors she’s opened for other people in the industry." (You can also see Day rushing to her side after she fell into the waves.)

When you're standing on a rock topless, it's good to have people in your corner. Kate knows.