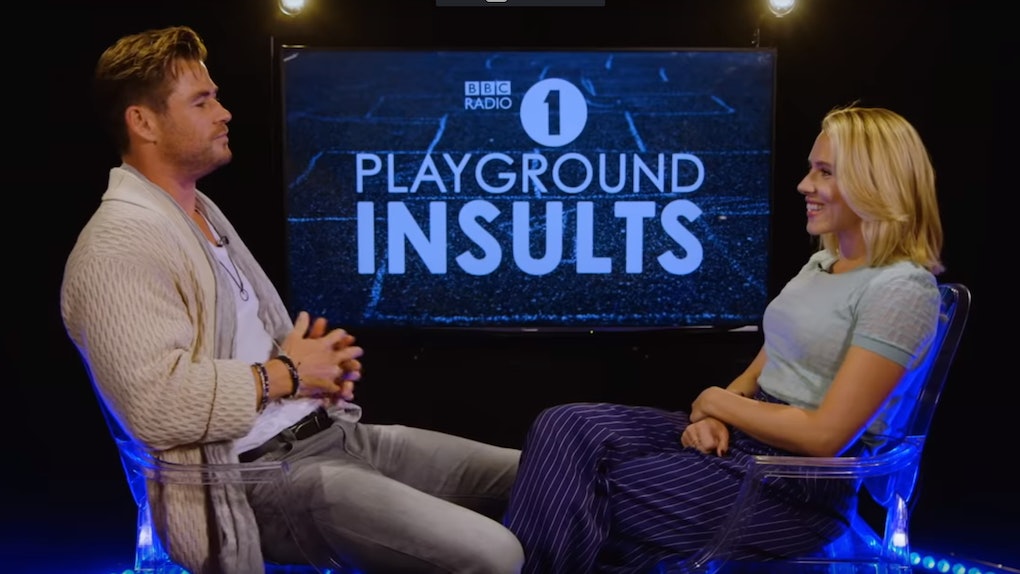 Chris Hemsworth and Scarlett Johansson may have worked nicely together in the latest Avengers installment, but that doesn’t necessarily mean they’re nice to each other all the time. As a matter of fact, they worked out all their offset issues during a recent appearance on BBC Radio 1. OK, I'm just kidding, these two love each other at all times. But you wouldn't know it based on the video of Chris Hemsworth and Scarlett Johansson insulting each other, which will probably make you laugh out loud!

In the video, the Avengers duo played a game of “Playground Insults” and all the hilarity of it can't be missed. The BBC1 Radio hosts laid out the ground rules. And there were quite a few of them!

“Here’s the rules: don’t hold back, it’s just a game; don’t take the insults personally; and remember, the insults leave the room when you do. All you’ve got to do is make each other laugh and the game ends when one of you loses it or someone delivers a killer insult,” the hosts revealed.

That, of course, gave Hemsworth and Johansson free reign when it came to insulting each other. Almost immediately, Johansson went straight for the jugular.

"Chris, you're ugly," Johansson said immediately. "Everybody's been talking about it. You're just really ugly."

Hemsworth replied, "Beauty is on the inside and inside you are just awful."

Check out the hilarious video of Chris Hemsworth and Scarlett Johansson insulting each other:

The game just went downhill from there. Johansson took to insulting Hemsworth beloved collection of cardigans next.

"You've got a growing collection of grandma cardigans and I've been meaning to talk to you about it. It's cray," Johansson joked. "It's like you're basically a walking Ann Taylor ad."

And again, the game just went way, way downhill. In an effort to defend his cardigans, Hemsworth decided to insult Johansson’s intelligence.

“It’s lucky you’re beautiful because there’s nothing up here,” Hemsworth said, pointing to his head.

Johansson was very obviously taken aback. “That’s mean! Did you just call me dumb?” she said.

What followed was a bit of banter about the low blow from Hemsworth, all in good fun, though! Then, the two movie stars started talking about everything that goes down on set. Like the fact that Hemsworth takes forever in the makeup trailer and keeps his co-stars, Johansson included, waiting to get started for the day. This, of course, caused a bit of uproar from Hemsworth, which resulted in him insulting Johansson’s pants.

"When you went to the beach the other week and you had that beach umbrella, did you know it would eventually turn into the pants you're wearing today?" he asked.

Johansson had nothing to say about that, but she did circle back to her original insult.

"Have I mentioned how ugly you are?" Scarlett replied, before adding later, "your biceps look like Thanksgiving turkeys."

And that basically sent Johansson and Hemsworth into a fit of laughter during which they sort of apologized for all the other insults they said throughout the video. It’s actually quite funny and wholesome, even though they each got a few low blows in there. All in all, though, it's clear they get along great and have a lot of fun together.