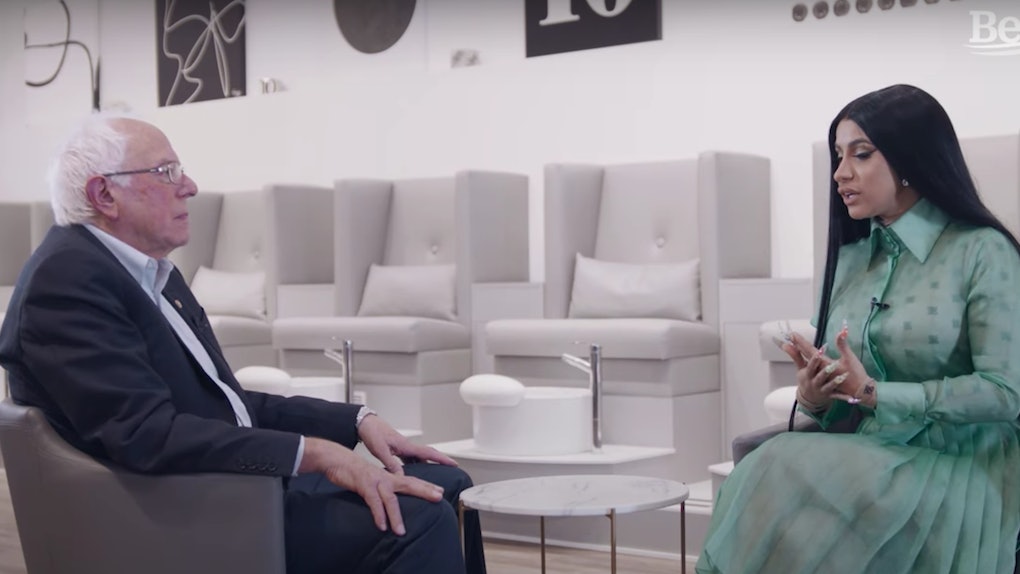 PSA: Cardi B is feeling the Bern, and she's encouraging her fans to get on board. While I'll admit that the "Clout" rapper and Bernie Sanders might seem like an unusual pairing at first glance, they showed viewers that they actually have quite a bit in common when it comes to their politics during a sit-down talk at a Detroit, Michigan nail salon. Quips and banter aside, this video of Cardi B’s interview with Bernie Sanders actually gets pretty real about important issues like police brutality, healthcare, and student debt, so you'll want to watch the 12-minute clip if you want to learn more about the Vermont senator's stance on these hot button topics in the most entertaining way possible.

If you follow along on Bernie Sanders' Instagram page, you've probably seen the politician hyping the conversation over the past couple days, calling the 2020 race the "most important election of our lives."

Considering that Sanders is running for the Democratic ticket in the 2020 presidential election against a slew of other candidates, it's always good to know where they stand on some of the biggest issues impacting American citizens today — and Cardi B provides a simultaneously entertaining and educational take on it when the unlikely duo met to talk at the Ten Nail Bar. On Thursday, Aug. 15, Sanders shared the full video of himself conversing with the rapper on YouTube, as the pair covered topics such as health care, minimum wage, the student debt crisis, and police violence.

During the interview, Sanders spoke out against the "militarization of the police department" while reiterating his stance that all police-involved shootings should be investigated by the federal government.

Cardi B clarified the point by adding, "I don’t want people thinking that we’re trying to attack the police. Because let me tell you something, there was this one time that I started to feel like I hate the police, they’re pigs. But there’s a lot of cops that go in their jobs and they want to protect their people."

The Vermont senator shared his plans for change, saying "We need police departments that look like the communities that they serve — we get rid of a lot of this militarization of the police department, which is a form of intimidating people."

After opening up about his plans for student debt cancellation and tax reform, Sanders concluded the video with a push for people to take action by voting.

He concluded, "If we have young people voting in large numbers, you know what, I have zero doubt that Donald Trump would be defeated."

With the third Democratic debate just around the corner on Sep. 12 and 13, voters will have another chance to see Sanders voice the platform he'll be running on, but this video is definitely a good place to start.