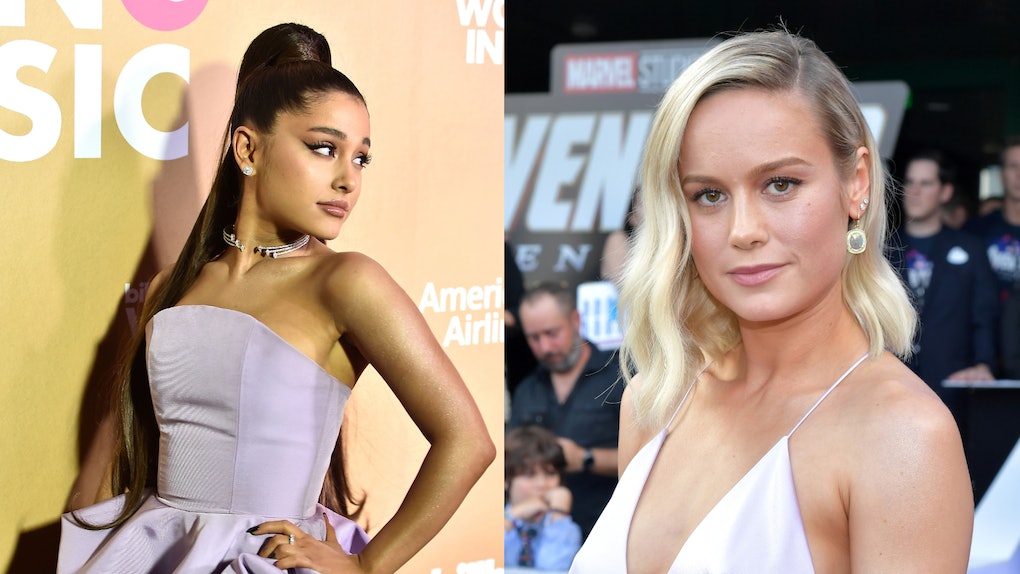 After watching Brie Larson's Instagram story, it seems like Captain Marvel might have hiding yet another superpower from us all this whole time. On Friday, May 3, the actress and filmmaker posted a series of videos to her Instagram Story showcasing some serious vocal chops, and if you haven't already seem them, drop what you're doing and go to her Insta now. Why? Well, because this video of Brie Larson singing Ariana Grande's "My Everything" will totally have you in your feelings.

According to People, over the course of 11 Instagram Stories, Larson sang and played guitar to "My Everything," which is off Grande's second studio album, also called My Everything. Larson starts off the series of Stories sitting on her couch in a casual, comfy outfit. In the first Story, Larson sings and plays the beginning of the song with the caption "@arianagrande Stan forever." She goes on to sing and strum the song perfectly, occasionally adding captions to her stories like "didn't have a capo so it's not the right key just FYI" and "thank you @arianagrande for having the most fun songs to sing." I don't know about you, but this cover has me itching for a collab between the two.

Grande reposted the first story on her own Instagram story with a teary-eyed emoji and a black heart, and all this love is seriously going to make me explode.

"My Everything" joins the growing list of Ariana Grande songs that Brie Larson has now publicly jammed out to. In a Carpool Karaoke from back in March, Larson and Captain Marvel co-star Samuel L. Jackson sang Grande's "7 Rings."

According to People, Larson did have a brief career in the music industry back before she was a successful actress and filmmaker. In 2005, when Larson was 16 years old, she released an album called Finally Out Of P.E. (because of course teenage Larson was excited to finally be out of P.E.). There's even a music video for one of the songs off the album called "She Said," in which teen Larson is almost unrecognizable in full-blown rockstar mode. Larson also had music videos for her songs "Done With Like" and "Finally Out Of P.E."

Larson's talents don't just extend to singing, filmmaking, and acting. Apparently, she has superhuman strength, too. In a video Larson posted to her Instagram back in February, the actress is seen pushing a Jeep up a hill for 60 seconds. No, the Jeep isn't a prop and no there isn't a stunt double filling in for Larson — it's actually her, in the flesh, training for her Captain Marvel role. She captioned the video,

A training highlight - pushing @risemovement almost 5000lbs Jeep (with a full tank of gas and Alyssa behind the wheel for safety!) for 60 seconds. In Captain Marvel @nike Metcons! It’s a strong vibe but I like it.

After watching this video, I'm seriously wondering what Larson can't do. I'm fully expecting to learn about even more of her hidden talents over time.

More like this
Olivia Rodrigo's Reaction To Getting Her First Parking Ticket Was Priceless
By Brandy Robidoux
Is Taylor Swift's "Mr. Perfectly Fine" About Joe Jonas? Sophie Turner's Instagram Has Fans Curious
By Brandy Robidoux
When Will BLACKPINK's Lisa Make Her Solo Debut? It May Be Right Around The Corner
By Michele Mendez
Stay up to date