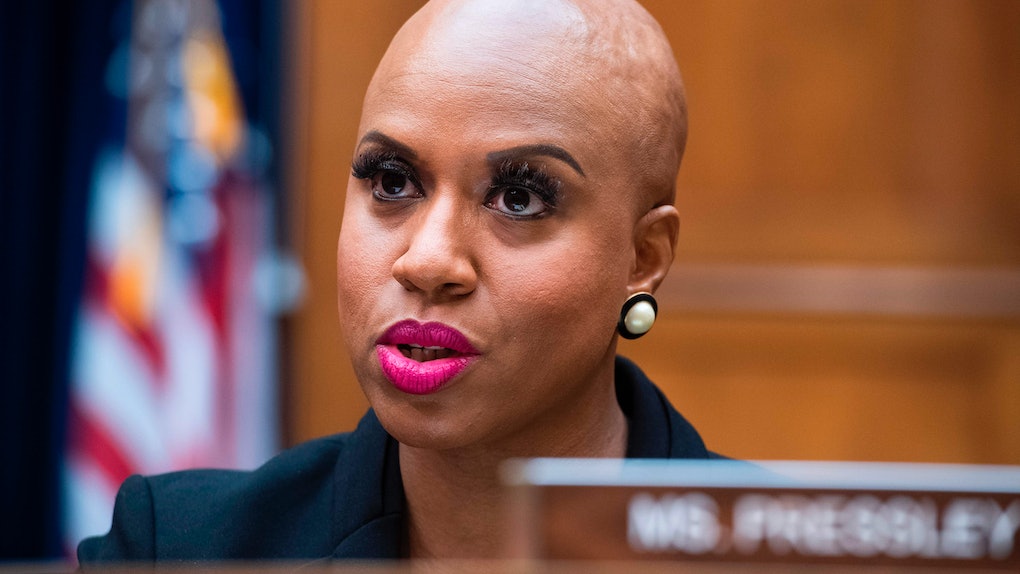 With just hours to go until polls close on Tuesday, Nov. 3, Rep. Ayanna Pressley (D-Massachusetts) decided to remind all of us that voting should be an act of joy, not a burden — despite how stressful the election season has been. In the spirit of civic duty, fans quickly took to Twitter to share a video of Ayanna Pressley dancing "The Wobble" on Election Day 2020, and it's a big mood that'll help carry you through the rest of the day.

After the Twitter account for the Working Families Party shared a video of the congresswoman, who is closing out her re-election campaign, busting a move with a few of her constituents at the polls, Twitter users couldn't help but smile and share the joy. Even fellow lawmaker Rep. Alexandria Ocasio-Cortez (D-New York) took to Twitter to repost the video, writing, "Today's the day!"

Pressley also took to Twitter to comment on the video going around, clarifying that she was, in fact, doing "The Wobble" and encouraging voters to remember that casting their ballots should be a joyful act.

"I love that people are joyful in casting their ballots & making their voices heard. We met elders & first time voters, families voting together. Great start to #ElectionDay," she told her followers, adding, "Joy is an act of resistance."

It's clear voters were very much here for Pressley bringing joy to the polls, and they're hailing it as a symbol of the vibes everyone should be serving as the final day of voting comes to the end.

Just days before Election Day, Pressley sat down with CNN's Don Lemon to encourage voters to cast their ballots. During a Sunday, Nov. 1 interview, the congresswoman said the stakes had never been higher "and we need to vote like it." She also cautioned against supporters becoming complacent or comfortable with poll numbers, which currently show Democratic presidential nominee Joe Biden ahead of President Donald Trump.

"I’ve never been a fan of riding the pollercoaster," she joked during the interview. "Everyone just needs to remain focused, head down, disciplined and just [make] sure that folks understand clearly the stakes of this election."

While it'll likely be days before the American public knows the final results of the presidential race, Pressley's "Wobble" dance is a reminder for every voter to take a deep breath, take each new development as it comes, and feel joyful about making your voice heard.

More like this
These Tweets & Memes About Matt Gaetz's Venmo All Make The Same Joke
By Cianna Garrison
In 'Riverdale' Season 5, Toni Topaz Is The Black Superwoman Without A Cape
By Erika Hardison
The More Contagious B-117 COVID Variant Is Now The Most Common Strain In The U.S.
By Rhyma Castillo
Stay up to date