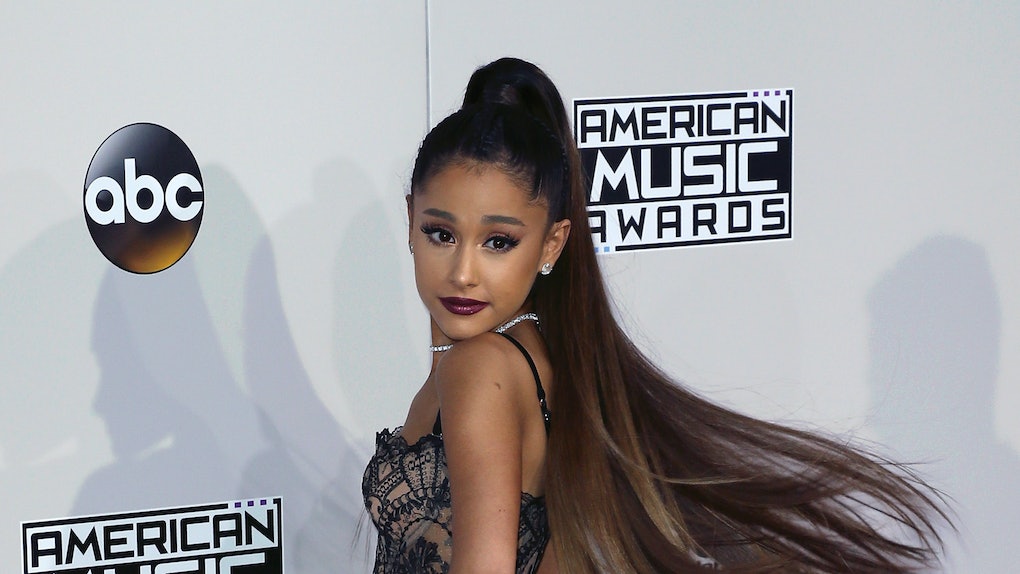 Ariana Grande gave her iconic ponytail a break on Nov. 25, showing fans a rare glimpse of her curly hair. The "Don't Call Me Angel" singer played with her natural hair in an Instagram Story and, though her face is covered with her phone, she looked as stunning as ever. This video of Ariana Grande showing off her curly hair has fans wondering when she's going to rock it on stage.

Grande hardly ever rocks her natural texture, almost always wearing it in her trademark high pony — which made this IG Story so exciting for Arianators.

The former Victorious actress wrote a lengthy Facebook post in January 2014 addressing people who give her "such a hard time" for the way she styles her hair. Grande explained her hair has been damaged from years of dying it on the Nickelodeon show, and urged haters to be kind.

"I wear it in a pony tail because my actual hair is so broken that it looks absolutely ratchet and absurd when I let it down," Grande wrote. "It's all that works for now (AND I'm comfortable for the first time in years)."

She concluded the post: "IT'S JUST HAIR AFTER ALL. There are way way way more important things."

So now that Grande is comfortable enough to show off her fabulous hair, stans are proud and want to see more.

See what fans had to say about the cute clip.

This isn't the first time Grande has turned heads with a new look. In October 2019, she ditched the sky-high pony during a concert in Germany and rocked her hair down.

Let's definitely not forget this super cute pic of Grande as a kid, in which she joked, without her lashes and pony, she'd still look the same as she did as a little girl.

While Grande didn't mention making her short hair a more permanent style, it's nice to see her embracing her natural hair on the 'Gram. After all, she's been on the road since she kicked off her Sweetener tour in March 2019, so taking a break from the constant hair and makeup is a healthy decision.

More like this
How Long Has Billie Eilish Had Blonde Hair? She Hid It For Months
By Daffany Chan
These Tweets About Ariana Grande Joining 'The Voice' As A Coach Are All Over The Place
By Michele Mendez
When Are Ariana Grande & Dalton Gomez Getting Married? Here's The Reported Tea
By Corinne Sullivan
Stay up to date