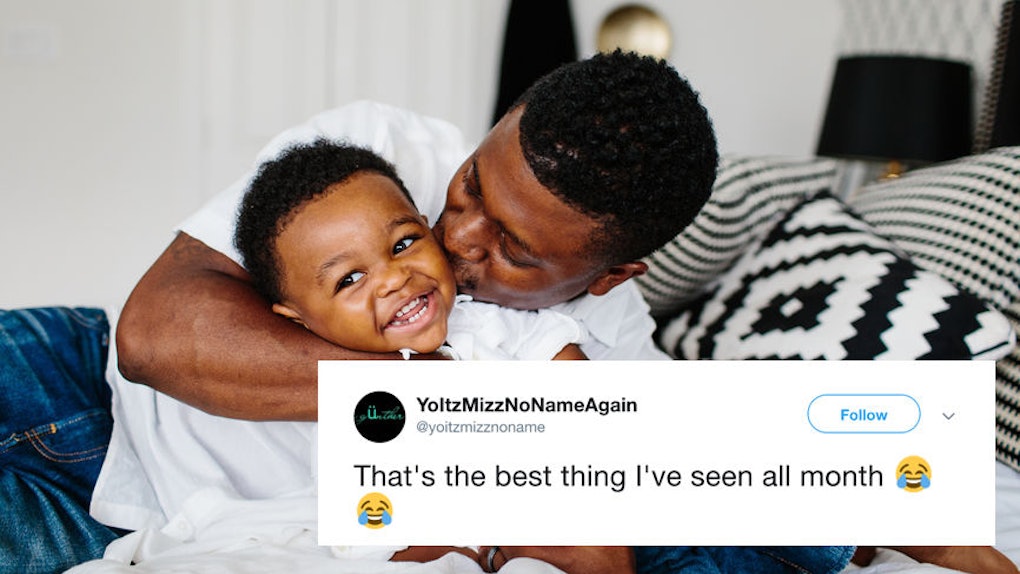 If you're in need of a pick-me-up today, or if you're just in the mood to watch some of the cutest content the internet has to offer, stop what you're doing, because I have quite the treat for you. A video recently posted online shows what might be the most adorable interaction between a baby and his dad that you're seriously not going to want to miss. This video of a baby talking to his dad has Twitter cheering on the seriously adorable father-son moment — and it will have you cry-cheering, too.

On Tuesday, June 4, Facebook user Shanieke Pryor posted a video of a baby and his dad talking things out on the couch. Pryor, who appears to be the baby's mom and the father's partner, captioned the video, "Only this child!! Having a full-fledged conversation with Daddy and Daddy is just as bad."

The video starts off with the father, sitting on the couch with his arms crossed, asking the baby a question about a TV show they're watching. Then, the baby proceeds to respond in a full-fledged, made-up baby language that seems like it could be real because of how confidently the baby replies. This spurs a minute-and-18-second back-and-forth "convo" between the baby and his dad, where the baby babbles something in his secret baby language and the dad responds in English which, shockingly, the baby seems to understand perfectly and respond to. Both the baby and dad are smiling throughout the exchange, and one look at the video will have you grinning as well.

But, don't just take my word for it. Check it out this incredibly adorable, heart-warming interaction for yourself:

See? I told you. This is the literal best thing on the internet right now, and I am prepared to die on this hill. Eventually, the video got reposted on Twitter and the Twitterverse absolutely devoured it.

Like, it's so cute that it's literally so hard to stop watching! #relatable

Other people commented on how uplifting and sweet the video was. Twitter user @yoitzmizznoname wrote, "That's the best thing I've seen all month," which, TBH, same. Twitter user @envious_angels added to the conversation, writing, "The world is such a fine place to be sometimes."

Of course, no content can exist on the internet without it becoming meme-ified, and the sweet father-son moment got turned into a fair share of memes as well. One Twitter user, @DelightfulTofu, reposted the video and wrote, "Me having a whole conversation with my cat." Another Twitter user, @pSYChopath1206, captioned the video, "Me pretending to complain about the game of thrones finale even though I didn't watch it."

Of all the baby videos I have ever seen (trust me, the number is pretty high), this has to be one of my all-time favorites, not only because of how cute this father-son relationship is, but how incredible the baby's language and comprehension skills seem to be. So, if you need me, I'll be doing nothing but watching this video for the foreseeable future.