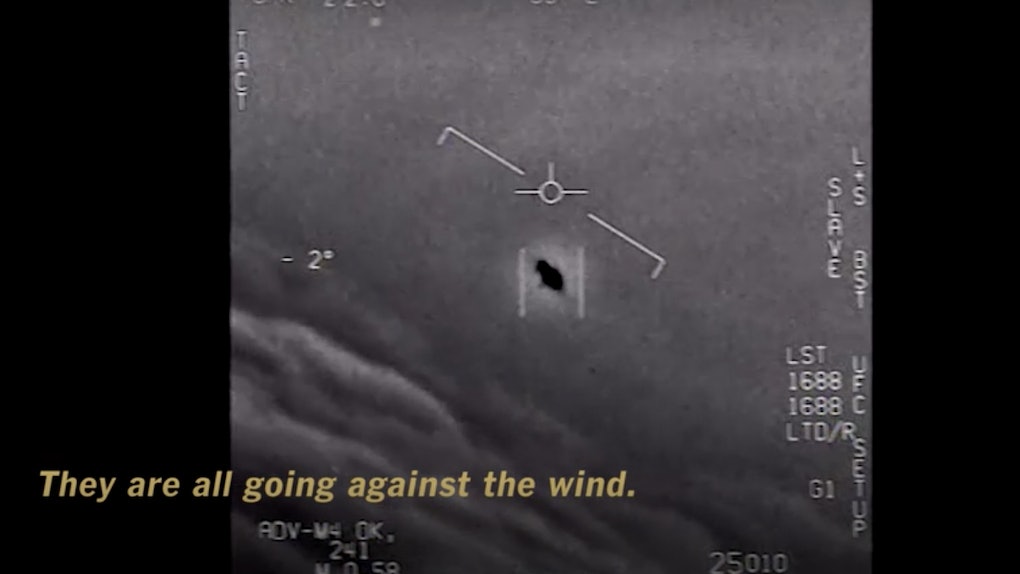 If you've ripped through Stranger Things 2 the week the second season was released like I did, and are feeling the void of not having any new creepy and extraterrestrial content to obsess over, you're in luck. As part of a story confirming the U.S. government's secret program focused on investigating unidentified flying objects, the Pentagon released this video of a UFO taken by a Navy fighter jet pilot back in 2004. And the footage is so intense it's giving us serious chills.

The video first hit the internet as a part of a New York Times report on the Department of Defense (DoD) and its allocation of funds, which was published on Dec. 16. According to the Times, the DoD spent a total of $22 million on a program that studies and investigates reports of encounters with unidentified flying objects, more commonly known as UFOs.

The Pentagon has confirmed and acknowledged the Times' report to be true. And along with that acknowledgement, it has also provided the Times with never before seen footage of a UFO spotted by U.S. Navy fighter jets off the coast of San Diego in 2004. I don't think I've ever seen UFO footage as clear and intense as this video, and I for one am stunned. You'll just have to watch the video to see for yourself:

Personally, this video is unlike anything I've ever seen. You can hear the two pilots are speculating back and forth on what the object actually is. One of them believes that it's a drone, and another says that the object is flying against the wind. The thing honestly looks like the Millennium Falcon (in my opinion) and it's not hard to convince yourself that this is an actual alien spacecraft. It's just that creepy.

This video was officially released by the Defense Department’s Advanced Aerospace Threat Identification Program, which is the name of the program created to investigate such sightings and encounters with UFOs and other extraterrestrial related matters. The program was launched in 2007 and is said to have shut down its activities in 2012, per the Times. However, the newspaper reports that although funding has halted, the program still exists and members still will investigate "episodes" that are brought to them while still carrying out their regular duties.

The program's launch was due in large part to the Senate's majority leader at the time, Democrat Harry Reid of Nevada. Reid is known to have a strong interest in "space phenomena" and requested that the program be created and take a portion of the Defense Department's budget for funding. The now-retired senator even retweeted the Times article once it was published, adding his own two cents and stating, "The truth is out there. Seriously."

Cue the X-Files theme and the shivers up your spine.

The Advanced Aerospace Threat Identification Program has remained completely classified — until now. And although parts of the program are still being kept under wraps, this news gives us a little bit more insight as to how the government handles so-called "close encounters of the third kind."

Reid himself says that he's not embarrassed or ashamed that he began this program and its initiatives. “I think it’s one of the good things I did in my congressional service. I’ve done something that no one has done before,” he said in an interview. And for good reason. Because I've never seen a video that one can so clearly argue is a legitimate UFO sighting, and I'd argue that videos like this should be researched seriously.

If I was an alien believer before, that belief has doubled, and I'm laying the blame on this video. And the fact that this kind of evidence was taken seriously by the Defense Department makes me think that the government takes this seriously, too. I mean, how would you explain what you saw in that video? Because if you ask me, whatever that flying object was, it was not something we've seen on this planet before. Good luck sleeping tonight.