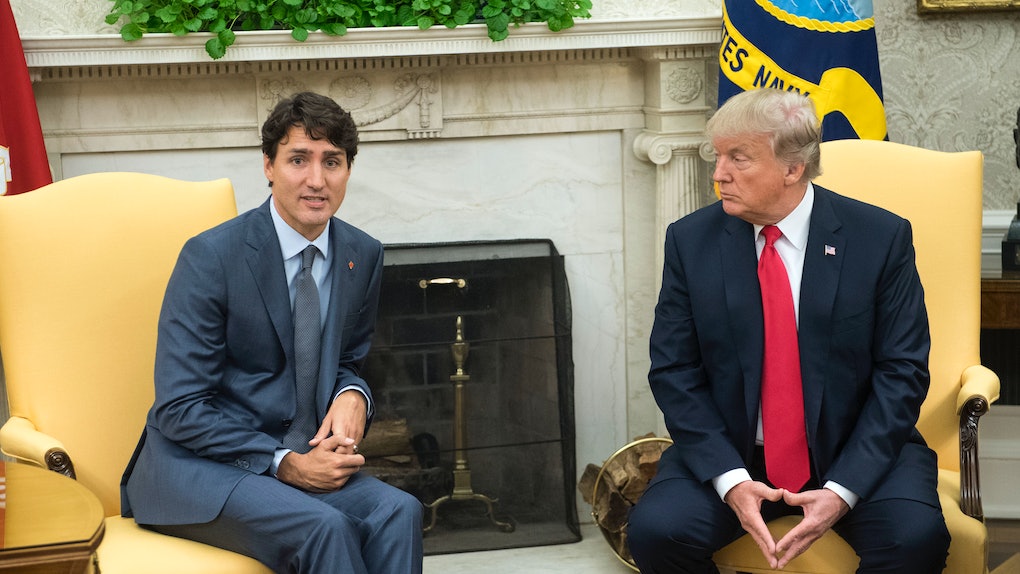 This Trump Quote About Trudeau & Trade Deficits Is So Bizarre

On Thursday, March 15, The Washington Post reported that it obtained audio of President Donald Trump making a fundraiser speech on a day before. The speech reportedly features the president talking about a past meeting between himself and Canada Prime Minister Justin Trudeau. While the entirety of the transcript in The Post's story stands out as a whole, this Trump quote about Trudeau and trade deficits was most noteworthy.

Here's what Trump said about the meeting with the prime minister, according to The Post,

Long story short? The president insisted on making a claim that he said he "had no idea" about. Nonetheless, in an apparent response to the reporting of the speech, Trump doubled down on the claim in a tweet on Thursday.

On Thursday, March 16, the president tweeted, "We do have a Trade Deficit with Canada, as we do with almost all countries (some of them massive). P.M. Justin Trudeau of Canada, a very good guy, doesn’t like saying that Canada has a Surplus vs. the U.S. (negotiating), but they do...they almost all do...and that’s how I know!"

The United States does not, in fact, have a trade deficit with Canada. That much is made unequivocally clear by the U.S. government itself. On the official government website of the Office of the United States Trade Representative, a page listing facts about the American-Canadian trade relationship says, "U.S. goods and services trade with Canada totaled an estimated $627.8 billion in 2016. Exports were $320.1 billion; imports were $307.6 billion. The U.S. goods and services trade surplus with Canada was $12.5 billion in 2016."

A trade deficit would mean that the United States purchases more in Canadian goods than Canada does American goods.

Despite the fact that the numbers don't support the president's claim, the claim has become one that Trump has repeated on several occasions, particular as he makes an argument for why tariffs on certain, foreign imported goods are necessary.

“We have large trade deficits with Mexico and Canada. NAFTA, which is under renegotiation right now, has been a bad deal for U.S.A. Massive relocation of companies & jobs,” Trump tweeted on Monday, March 5. “Tariffs on Steel and Aluminum will only come off if new & fair NAFTA agreement is signed.”

The general idea behind the tariffs that Trump has pushed for is that steel and aluminum from other countries would be taxed, while steel purchased domestically would not be. The policy falls under what some refer to — often derisively — as "protectionism," or a policy meant to help protect a domestic industry by means that fall outside of standard competition.

The "Trump tariffs" have been criticized by members of his own party. Still, the president signed an order in early March to impose the tariffs. One clear reason for critiquing the tariffs has been the flawed argument he has used in advertising them. The argument includes the repeated false claim the United States has a trade deficit with Canada, which the president clings to despite Trudeau — and the facts — opposing the claim.

In recalling the meeting with Trudeau, Trump said, according to The Washington Post's report, "Trudeau came to see me. He’s a good guy, Justin. He said, ‘No, no, we have no trade deficit with you, we have none. Donald, please.’"

As the president himself said, the reported quotes indicate he has no idea about the facts.