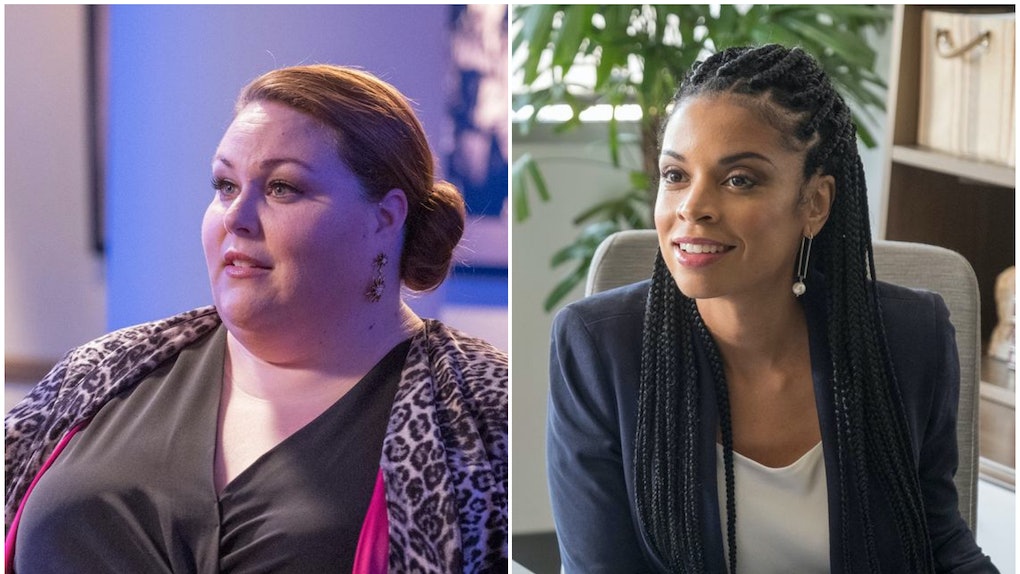 We're all a little guilty of concocting far-fetched theories about TV shows, but This Is Us can inspire fans to brew the most complex, slightly unbelievable guesses about what comes next. An inevitable dark cloud is still hanging over everyone's picks of who the "her" in the show's future timeline is, and such gloomy prospects have encouraged a pretty dark side to one fan's theory. This This Is Us theory about Kate and Beth will leave you shook, but parts of it definitely sound feasible.

Despite hints that Randall and Beth hit a rough patch in their marriage this season, the show hasn't quite planted the seeds of that bumpy stage yet. In Season 3's second episode, "A Philadelphia Story," Beth was caught up with work, but as she told Randall at Kevin's movie premiere, she nailed her proposal. For now, things are sailing smoothly for the pair, but Kate and Toby haven't had an easy start to married life. The rest of the family discovered they were considering a risky IVF surgery for Kate to become pregnant again, but the tension behind this came from Kate's interactions with Rebecca. So what would a fan focusing on Kate and Beth have to say about the characters' future?

Reddit user Denaliwolf posted a guess about how Kate and Beth's relationship fares in Season 3. They've never been the best of friends, but Kate's bachelorette party in Vegas inspired the two to call a truce and realize that their perceptions of each other weren't the most accurate. At the end of "A Philadelphia Story," Randall learned about Kate saying she was the only one who could pass down a piece of Jack, understandably growing offended. For now, that doesn't have to do with Beth, but Denaliwolf shared some insight on the show's Reddit thread, wondering:

What if the reason Beth was stress eating and so busy is that she's just found out she's pregnant and trying to avoid telling Randall since they've got so much going and she feels the baby will complicate things. My theory is Randall finds out and resents Beth for keeping it from him... They find out the baby is a boy and decide to name him Jack William. Kate becomes enraged because she's the "one who can pass on a part of dad." Kate tries to forbid them from calling the baby Jack because that's her name to use.

Sounds plausible, right? Beth has had a pregnancy scare before, but seeing as she and Randall want to formally adopt Deja, it isn't the most suitable time for another new addition. An unexpected pregnancy would definitely explain clues about the two hitting a wall, and Kate reacting fiercely to them wanting to honor Jack makes total sense.

While a family feud over Jack's namesake is possible, it's the second half of the theory that is a bit of a stretch.

There's a huge fight between Beth and Kate. Kate grabs a heavy blunt object and beats Beth with it. Beth stops moving and Kate snaps out of it long enough to realize what she's done. The paramedics get Beth to the hospital but it's too late, she lost the baby. Beth is now in a coma and on life support. Kate is charged with assault and infant homicide. When we see them in the future, it's time for Randall to pull the plug and that's why Tess is not ready.

Seriously? As another user pointed out, this scenario might be believable if This Is Us was an afternoon soap opera, but just because the show loves to play with our emotions doesn't mean it'll turn to the worst case scenarios for resolution. While Kate's comments about Jack's legacy will definitely stir some drama in next week's episode, an intense fight between Kate and Beth doesn't seem that credible. Never say never, but these two might just be pleasantly neutral with each other for now.

More like this
Who Did Emily Poison? 'The Handmaid's Tale' Season 2 Is Off To An Intense Start
By Ani Bundel
In 'Riverdale' Season 5, Toni Topaz Is The Black Superwoman Without A Cape
By Erika Hardison
This TikTok Theory About Eric From 'Boy Meets World' Will Blow Your Mind
By Rachel Varina
Stay up to date