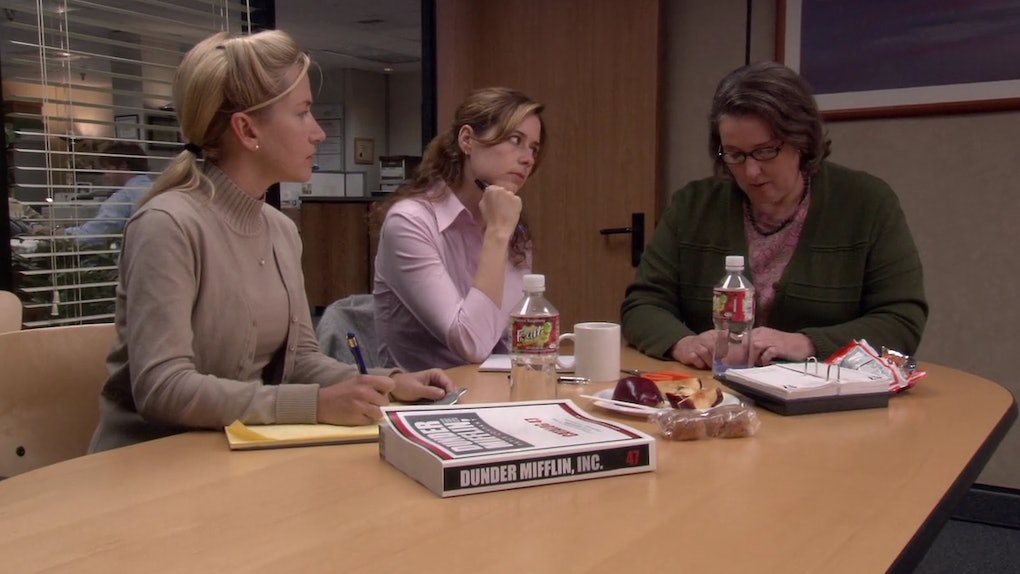 This 'The Office' Conference Room Theory Will Make You Rethink Everything

Dunder Mifflin's conference room was the hub of the paper company's Scranton branch. It saw dozens of festivities (shout out to the party planning committee), awkward seminars about everything from ageism to disability awareness, and countless pointless meetings. Honestly, very little work got accomplished in there. But now this The Office conference room theory will make you look back and question how everything in it went down so seamlessly.

"I've seen every episode roughly 1,000 times — but it wasn't until the other day that I realized there was something very...unusual about Dunder Mifflin's conference room," BuzzFeed writer Stephen LaConte wrote on Oct. 2. "And so, my friends, the question is: How the hell is this gigantic, heavy table getting moved in and out of the room so frequently?"

LaConte posited the head-scratching idea after a Reddit user (Redditors are basically the internet's Sherlock Holmes) noticed a few years back: "I just realized that the conference room is constantly changed from filled with chairs to having a huge desk in the middle."

Ah, the mystery of Dunder Mifflin table. It's true — that massive hunk of furniture just seemed to disappear at a moment's notice. The room was often filled with chairs facing the front without any mention of said table's move. How many impromptu gatherings did Michael throw throughout his tenure as Regional Manager? 1,000?

OK, I hear you. It's a TV show. Anything can happen. Even the Michael Scott Paper Company buyout seemed implausible. Audiences shouldn't really analyze props this closely or they'll spend every waking hour doubting everything, right?! But The Office isn't a I'll-let-that-one-slide fantasy series like Game of Thrones — it's supposed to maintain realism — so it makes sense that silly oversights like this would worm into the brains of longtime viewers. Despite this table thing, the set designers obviously went into painstaking detail to recreate an average American office environment. There are even local Pennsylvania nods like Dwight's Froggy 101 sticker (an actual country station) or the recurrence of Crystal Soda (a Scranton-based company). Jitterz, Poor Richard's, and Alfredo's Pizza Cafe are all actual places, so it's hard to say the writers and producers didn't strive for authenticity. Producer Steve Burgess explained to Take Two before the show's series finale in 2013:

Basically, when the show was set in Scranton, the Chamber of Commerce and the Scranton businesses have been such a great help to The Office and they send us real business knick-knacks. So all the stuff on the desks, all the magnets on the refrigerator in the kitchen, are all from real Scranton businesses and they've been nice enough to help us out in allowing us to use their names when we mention a steakhouse names Carl Von Lugers, there's a real Carl Von Luger's in Scranton.

As for that magically portable bulky table? I think fans will just have to suspend their disbelief with that one. Hasn't The Office given us so much, guys? Let's give credit where credit is due.