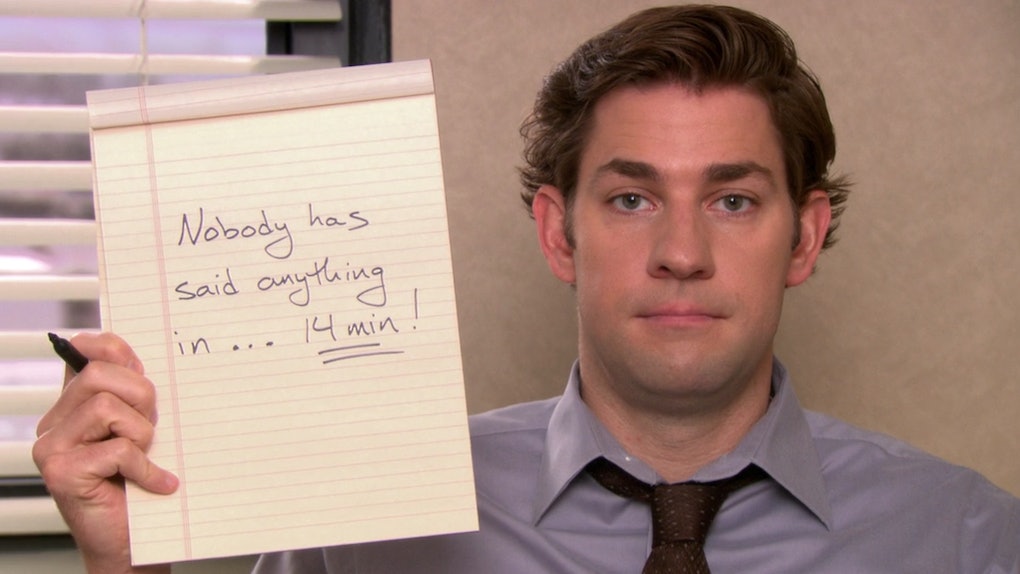 In 2018, the world's biggest movie star is... John Krasinski? When The Office ended almost five years ago, I never would have thought that the lovable Krasinski would go on to be a major movie star, yet here we are. Krasinski's silent horror thriller, A Quiet Place, dominated the box office in its first weekend, turning the man behind Jim Halpert into a bonafide rock star. Naturally, memes immediately began popping up about Krasinski's meteoric rise, and now, fans have created a Quiet Place-The Office mashup that highlights the similarities (if you can call them that) between the beloved show and the hit movie.

A Quiet Place follows a family that lives in a post-apocalyptic universe where evil creatures hunt by sound. No matter where Lee Abbott (Krasinski) and his wife Evelyn (played by his real-life wife Emily Blunt) go with their children, the creatures remain close by, so making even the smallest of sounds is life-threatening. The movie's premise is both incredibly unique and chilling — especially because the majority of the film's sound comes from ambient noise — but luckily, Krasinski, who directed, co-wrote, and stars in the movie, is no stranger to long bits of silence. As many fans of The Office have pointed out, the comedy employed a similar plot in the Season 8 episode "Trivia," in which the Dunder Mifflin employees tried to maintain an office-wide silent streak.

In "Trivia," Jim acts as the official ringleader of the silent streak, so now that he's performing an, um, similar role as Lee in A Quiet Place, it makes perfect sense to mash the two scenes together. And that's exactly what over-eager fans have done with "A Dwight Place," a parody that mashes together scenes of A Quiet Place with clips from "Trivia" and various other moments from The Office to warn against the most evil creature in Scranton: Mose Schrute.

Mose (played by the hilarious Mike Schur) doesn't appear in many episodes of The Office, but when he does, he's always doing something bizarre. No matter whether he's aggressively smashing beets, running next to Jim and Pam's car like the groundskeeper in Get Out, or snatching Angela in the middle of the night, Mose is generally always freaking out Dwight's guests in one way or another. When compared to the relatively normal employees of Dunder Mifflin (minus Creed, because duh), it's easy to see him as a potential threat. If you're really stuck in a quiet place, being alone with Mose is probably not an ideal situation.

I never thought that a mashup of A Quiet Place and The Office would be exactly what I needed, but it totally is. And fans on Twitter seem to agree.

Of course, the silent streak in The Office is just a little bit different than the one in A Quiet Place. In "Trivia," the employees remain so committed to the streak that they ignore phone calls and resist telling the office about a hamburger-eating raccoon (this is especially hard for Andy, who we all know loves to hear the sound of his own voice). But after 20 minutes of sweet, sweet silence, Kevin ruins the streak when he bites into a candy bar and says, "Oh yeah." Naturally, his co-workers are p*ssed, but Kevin insists that he "can't help it." Ugh, Kevin. They try to be silent again, this time for more than 20 minutes, but the show cuts to the opening credits and we never get to see how their second attempt turns out. I'm assuming that it doesn't end well, though, because eventually Kevin is going to eat some more candy, right?

Why wait around for an Office reboot when you have "A Dwight Place?" This mashup is exactly the kind of The Office revival I'm looking for.

More like this
17 Tweets About Simu Liu In The 'Shang-Chi' Teaser, From Proud 'Kim's Convenience' Fans
By Dylan Kickham
Here's How To Stream 'Nomadland' So You Can Finally Get The Hype
By Rachel Varina
Who Plays Jamie In 'Cruel Summer'? You've Seen Froy Gutierrez Before
By Rachel Varina
Stay up to date