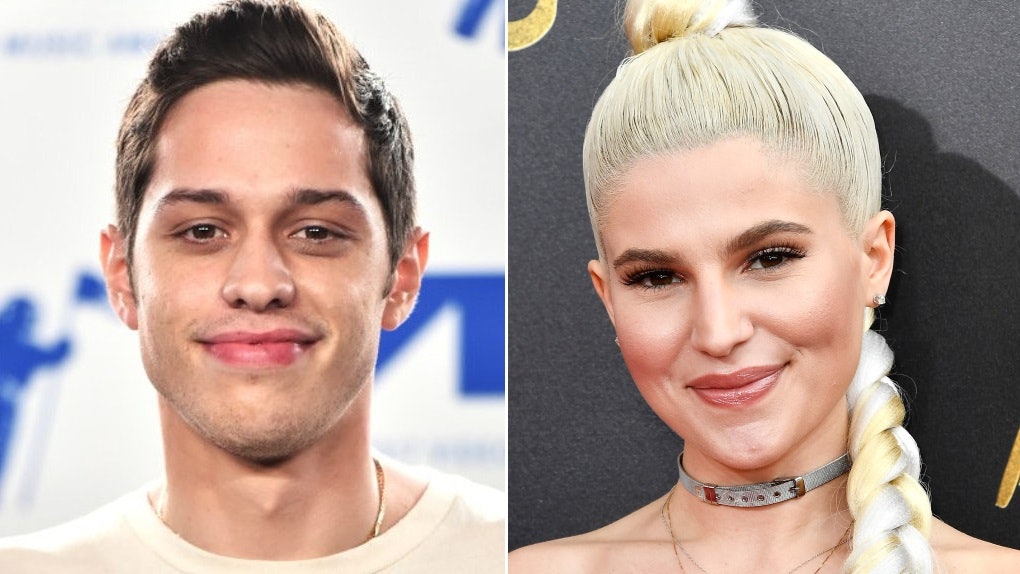 If you’ve been following all the dating rumors surrounding Pete Davidson as of late, then you know he’s been linked to actress Kate Beckinsale multiple times. But Davidson’s recent reunion with ex-girlfriend Carly Aquilino is prompting fans to question whether his reported relationship with Beckinsale will actually take off. Davidson and Aquilino apparently spent some time together with friends backstage at Davidson’s Feb. 18 show in New York. And the photo of Pete Davidson with Carly Aquilino from that night is actually quite cute!

Davidson’s friend and photographer Marcus Russell Price took to Instagram on Monday, Feb. 18 to share a glimpse at what goes on backstage at a Pete Davidson show. And it was in Price’s Instagram stories that he posted a photo of Davidson, Aquilino, comedians David Sirus and Derek Gaines, and himself. Of course, the most noteworthy people in the photo are Davidson and Aquilino since they dated a few years ago. But there’s apparently nothing romantic going on between them.

Davidson and Aquilino dated back in 2015. As you probably know, Davidson went on to date Cazzie David and then, of course, moved on from that relationship with Ariana Grande, to whom he was engaged for a few months. Davidson and Grande split in October 2018 after just five months of dating.

Here’s a look at the photo of Davidson, Aquilino, and friends backstage at Davidson’s Feb. 18 show:

Since that time, Davidson has reportedly been having something of a dalliance with Kate Beckinsale. The two stars met at the Golden Globes in January 2019 and have been getting closer ever since. According to a source for E! News, the relationship between Davidson and Beckinsale is still pretty casual.

"They spend most of their time on opposite coasts so it's a casual thing," the source explained to E! News. "But they are going to keep talking and having fun together."

Apparently, "Kate thinks he's the sweetest and nicest guy." The source said, "They may seem like an unlikely match but she thinks he's great and she just loves all the laughs she has with him."

So, that’s promising, I suppose! And actually, Beckinsale seems pretty set on defending what she and Davidson have, whatever that may be. When a fan left a comment on one of Beckinsale’s recent Instagram posts calling her out for her dating choices, Beckinsale clapped back in the most epic way.

“Disappointed in your dating choices,” the fan wrote, clearly criticizing Beckinsale for her reported relationship with Davidson. Beckinsale responded with, “Fairly let down by your wonky beard but thought possibly rude to say.”

If Davidson caught wind of Beckinsale’s response, I’m sure he was pleased that she defended him in that way. In any case, it’s pretty obvious that Davidson has moved on from past relationships and is just the kind of guy that keeps in touch with exes even though his romantic relationships with them didn’t work out. As for Aquilino, it seems like she’s pretty cool with hanging out with her ex-boyfriend, which is awesome.

More like this
Cara Delevingne's Old Photo Of Her Grandmother With Prince Philip Proves It's A Small World
By Brandy Robidoux
Pete Davidson Moved Out Of His Mom's House & His New Place Sounds Lush AF
By Sydney N. Sweeney
Did Pete Davidson Confirm He's Dating Phoebe Dynevor? Here's Why Fans Think So
By Corinne Sullivan
Stay up to date