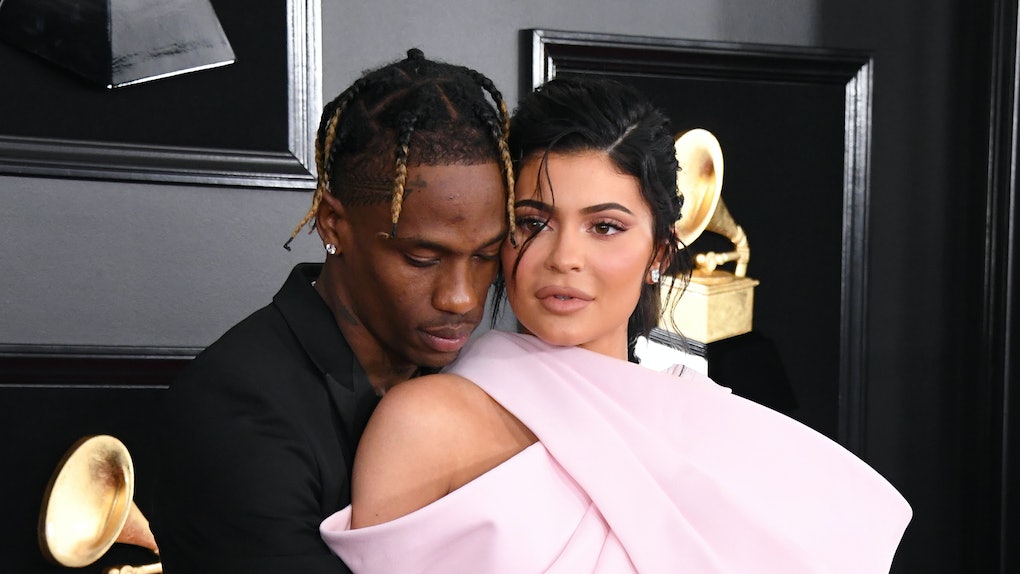 If you've been keeping up with Kylie Jenner and Travis Scott's relationship recently, you'll be relieved at the most recent developments. While speculation has swirled that the couple is on the rocks after reports of infidelity surfaced, the parents-of-one honestly look like they're living their best lives on vacation together. Elite Daily previously reached out to Scott's and Jenner's representations about the reports, but did not hear back at the time of publication. The ASTROWORLD rapper has seemingly broken his social media silence on the subject by sharing an image of his girlfriend, and this photo of Kylie Jenner and Travis Scott's cuddly pose seems to suggest that there's no trouble in paradise.

Scott, who briefly deleted his Instagram account when the cheating rumors surfaced, was back on the platform and paying homage to his "wifey" on Friday, March 29. It was the first photo of the pair that he'd posted in a while, and Scott and Jenner's cozy body language will make fans take a sigh of relief. Elite Daily previously reached out to both Scott's and Jenner's reps for confirmation and comment on the rumors of infidelity, but did not hear back. At the time, a rep for Scott "strongly" denied cheating claims to E! News.

Looking back, it's been a whirlwind couple of weeks for the pair. Even though Jenner and Scott's relationship timeline was a little unconventional, what with the Keeping Up with the Kardashians star getting pregnant just months after they first got together, I have to admit that I've found myself rooting for their love story. It didn't necessarily seem like a recipe for success, but the power couple has somehow managed to juggle raising a daughter with Jenner being named the world’s youngest "self-made" billionaire and the rapper promoting and touring for his album ASTROWORLD — all while gushing about how much they love each other and calling each other cute nicknames on the reg.

So, when Scott took to Instagram on Friday night to assure stans that he and Jenner are doing just fine, I can say I was way more relieved than I expected to be to hear an update on a celebrity couple's relationship status.

In the candid photo, the "Sicko Mode" hitmaker can be seen embracing Jenner — who's wearing what can only be described as a smitten expression — and them looking very much like two young people in love.

While the makeup mogul didn't return the favor, she also posted up a storm on the social media platform on Friday. Per the photos that Jenner and Scott have been sharing, it appears the pair are currently vacationing together, and her beau has been sharing plenty of flirty emojis in the comments section.

In response to a photo of the 21-year-old rocking a white bikini and a matching cover up, Scott posted rows of lightning and princess emojis.

Since the infidelity rumors surfaced, Scott has apparently "been bending over backwards to prove his love and erase any doubts she has," an inside source told E! News. And while an insider also told People around the same time that Kylie was have a hard time trusting her beau while he was on tour (TBH, I'm not that surprised as the Khloé Kardashian/Tristan Thompson/Jordan Woods cheating drama happened right before), it looks like this couple is ready to put the drama behind them as they head into April.

More like this
Niki & Gabi's 'Twinning Out' Snapchat Trailer Teases Big Changes
By Rachel Varina
Billie Eilish's Response To Haters Of Her 'British Vogue' Cover Makes A Powerful Point
By Cianna Garrison
Chrissy Teigen's Tweet About Celebs Like Ben Affleck Being Creepy On Dating Apps Is So Real
By Sydney N. Sweeney
Stay up to date