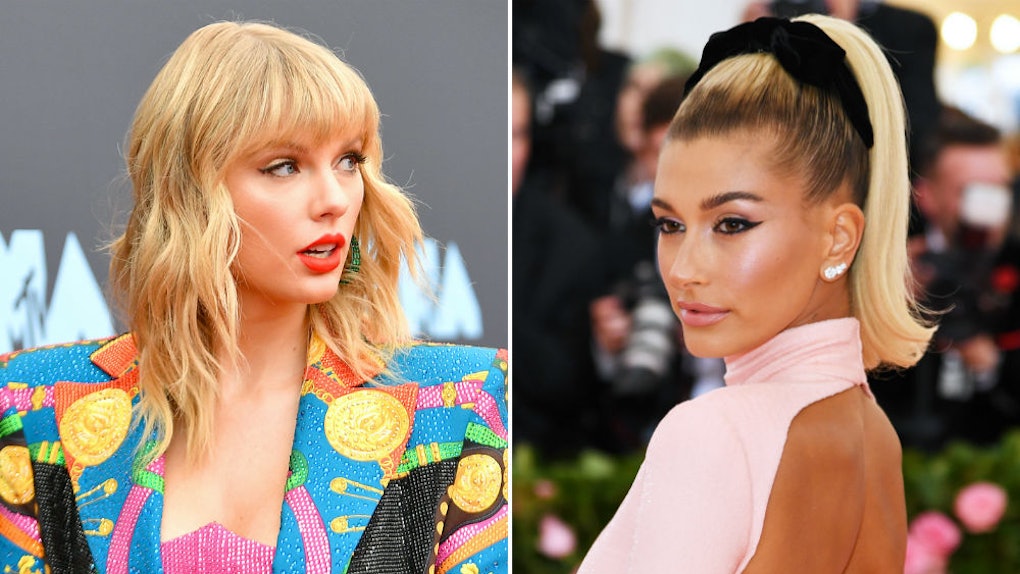 Hailey Baldwin is tatted up. The model and wife of The Biebs showed off her new ink on Sept. 3, and the photo of Hailey Baldwin's new neck tattoo has one particular fandom pretty elated. And it's not Justin Bieber's. It's Taylor Swift's!

Tattoo artist Dr. Woo was the one to reveal Baldwin's new ink on Sept. 3. He posted a black-and-white photo to his Instagram that showed Baldwin's neck, hair, and jacket, but not her face. Luckily for us, he tagged her in the post, captioned, "Love always wins." The tattoo is thin and small and says "lover" written in cursive. It's located on the left side of Baldwin's neck, right underneath her other neck tattoo of a cross.

Swift fans have been trolling the tattoo a bit in the comments section (not in a mean way), acting like Baldwin's "lover" tattoo is inspired by Swift's new album of the same name.

"Interesting choice since she came for our girl @taylorswift," one unimpressed user said.

I'm fairly certain Hailey Baldwin, who defended Justin Bieber after he responded to Swift accusing him and Scooter Braun of bullying her, heard Swift's new album and was like, "Yup, it's tat time," but I will say the tattoo's font looks a hell of a lot like the Lover font on the cover of Swift's new album.

Honestly, if this tattoo is inspired by any celebrity, it's Justin Bieber — Baldwin's ~lover~ — who also has his own slew of neck tats.

The same day Dr. Woo posted the photo of Baldwin's new tat, Baldwin posted a series of photos of her date night with her husband.

"The most perfect day with my person :)," she said in the caption. Unfortunately, she was too preoccupied being wrapped in Bieber's arms to show off the tattoo, but it's a cute pic nonetheless!

Bieber was busy posting some more serious Instagram content this Labor Day Weekend. On Sept. 2, Bieber posted a screenshot of a message he wrote in the notes app of his phone that talked about how fame has affected his mental health and relationships. He noted that being a child star thrust him into some bad habits and decision making as a young adult — habits that he's working on unlearning through the help of his family, friends, and wife.

"Everyone did everything for me, so I never even learned the fundamentals of responsibility," Bieber wrote. "By this point, I was 18 with no skills in the real world, with millions of dollars and access to whatever I wanted.”

"I started doing pretty heavy drugs at 19 and abused all of my relationships," he continued. "I became resentful, disrespectful to women, and angry. I became distant to everyone who loved me, and I was hiding behind, a shell of the person that I had become. I felt like I could never turn it around."

Then he brought up marriage and how it has become the best time of his life.

"It's taken me years to bounce back from all of these terrible decisions, fix broken relationships, and change relationship habits," he said. "Luckily god blessed me with extraordinary people who love me for me. Now I am navigating the best season of my life 'MARRIAGE'!! Which is an amazing crazy new responsibility. You learn patience, trust, commitment, kindness, humility and all of the things it looks like to be a good man.”

One could say that Bieber is basically saying in this post, "All's well that ends well to end up with you." Yup. I, Kelli Boyle, just quoted a Taylor Swift song. It be like that sometimes, lovers.