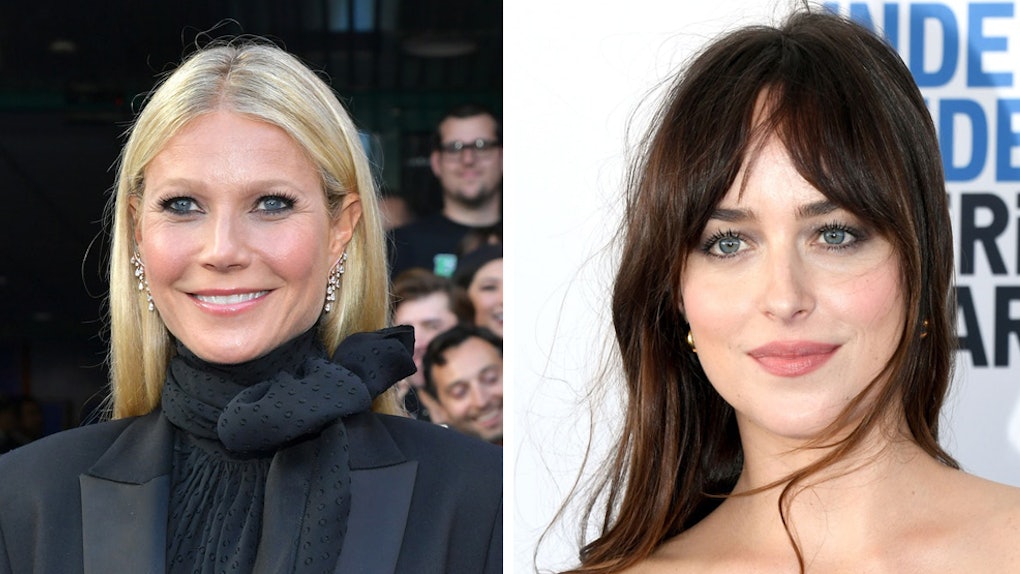 I am a true believer in staying friends with your exes — provided the relationship was a healthy one that just didn’t work out. In fact, some of my closest friends are people I once dated, which means over the years, I’ve also gotten to know their various SOs. Sometimes that worked out and we became friends, whereas other times the new partner just wasn’t open to having a friendship. That was a bit of a bummer, because it made things more awkward with my ex. So, when I saw a photo of Gwyneth Paltrow and Dakota Johnson on Instagram, bonding and being friendly at a mutual friend's birthday party, I was so stoked. Why? Because Johnson is currently reportedly dating Paltrow’s ex-husband, Chris Martin.

The photo shows the two of them sitting together at a table with their friend Derek Blasberg, who posted the image, taken at his birthday party, on Insta. Not only are they sitting together, but Paltrow has her arm wrapped around Johnson and they look like they are having a blast. Adorable. Even better, the caption reads: "Consciously throupling," a reference to Paltrow and Martin's statement following the end of their 10-year marriage, in which they described their breakup as "consciously uncoupling."

According to Us Weekly, Johnson and Paltrow's reported friendship is fairly new. In January, the publication reported that a source said the two didn't really know one another, despite sharing mutual friends, but that Paltrow was happy for Martin and Johnson and approved of their relationship. “Gwyneth is happy if Chris is happy,” the source explained. “She only wants the best for him. She trusts his judgment and knows he’s smart about his decisions and who he spends time with. She leaves it at that. She doesn’t scrutinize his choices or who he dates.” This is such a beautiful sentiment — and exactly how you manage to maintain a friendship with your ex and open the door to friendships with their future partners. Just sayin'.

All this friendliness couldn't have come at a better time, because as Us Weekly also reports, Martin and Johnson could reportedly be getting engaged sometime soon. Back in December 2017, when the couple seemingly first confirmed their relationship by taking a trip to Israel together, a source told the publication that Martin was already reportedly "head over heels” for Johnson and would be "engaged soon." A source explained that Martin was reportedly taking his time so that Paltrow could marry her current husband, Brad Falchuk, in September 2018. “He wanted to make sure [his and Paltrow's children] didn’t have too much change all at once,” the source said. Elite Daily reached out to both Johnson and Martin’s teams for comment regarding the engagement rumors but did not hear back by the time of publication.

Which brings us back to the present. With Paltrow and Johnson seemingly buddying up, it sure seems to me like everyone is chill and Johnson and Martin have Paltrow's blessing. What can I say? The only thing I love more than a celebrity wedding is one where it means everyone ends up as just one big happy family — including the exes. In the meantime, I’m all-in on this Paltrow and Johnson friendship.