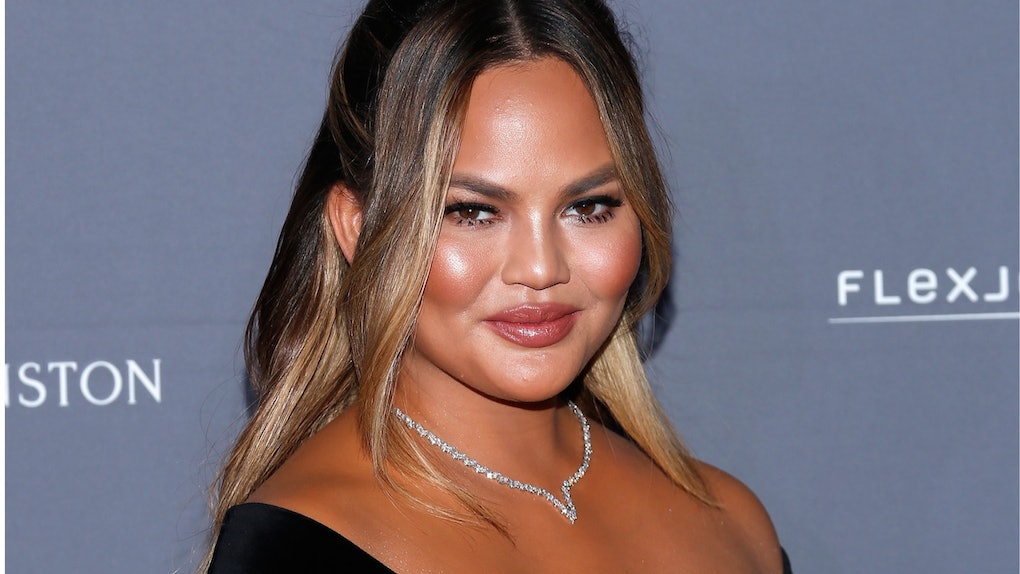 There isn't a day that goes by when Chrissy Teigen isn't making headlines for being the super hilarious person she is. Each time I think she can't top her previous antics, she takes it up a notch and surprises me again. So imagine me mindlessly scrolling through my Instagram feed, when suddenly, I see a photo of Chrissy Teigen sitting with her legs in the air. I literally had to do a double take because it honestly looked like something NSFW was happening there. Teigen's only choice of clothing was a towel as she posed with her bare legs spread out in the air. Yeah, that doesn't sound right, and with this description, what was I supposed to think was happening? It looked straight out of a hospital scene, but alas, this all happened at a house with Teigen's — errr — *front side* facing an open window. The photo is so confusing and it has me and the rest of the internet asking one question: What is happening?

Teigen captioned the photo, "When I was young, makeup was just for the face," and tagged her makeup artist Diane Buzzetta, as well as her hairstylist Glen ‘Coco’ Oropeza.

I'll show you the photo, but maybe go somewhere private where no one can see because, trust me, they'll think it's something entirely different.

OK, all good? Take a look at the photo:

I am speechless, like utterly speechless. Glen Oropeza is Teigen's hair stylist, right? So somebody tell me why is he working on Teigen's legs?

Apparently, the photo is a lot more innocent than it appears because Teigen was just getting her makeup done. Oropeza shared the photo on his Instagram Story along with the caption, "Sometimes I do body makeup too." I know, it still doesn't quite answer our question of what's going on. I mean, what makeup is getting done in that position?

Teigen's comment section was filled with loads of confused people. Writer Sally Kohn commented, "Good god I have so many questions," while radio host Jojo Wright simply wrote, "WHAT THE..."

I think my favorite comment came from comedian Whitney Cummings. She wrote, "Wait - Is this a home birth?" Honestly, that is actually a super accurate question, because that's exactly what it looks like, doesn't it?

I guess it's true that beauty is pain because that position does not look comfortable at all. But I guess that's just the secret to Chrissy Teigen's perfect legs!

You really never know what to expect to see on Teigen's social media pages. Don't even get me started on Teigen's Twitter account. On Monday, June 17, she posted a video of herself on Twitter playing around with a strawberry that made it look like she was popping a pimple. Eeek! She captioned the video with "Wild night."

A day after Teigen posted the video, it reached over 1 million views. That's just the power of Chrissy Teigen. She posts the most random pics and videos ever on social media, and her fans wouldn't want it any other way.