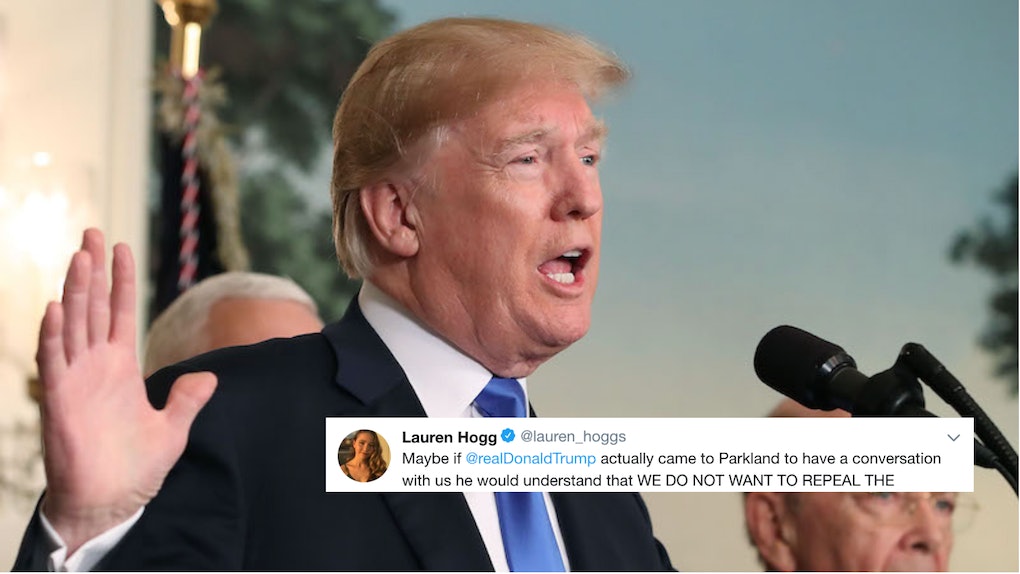 In an opinion piece published Tuesday in The New York Times, retired Supreme Court Justice John Paul Stevens called for the repeal of the Second Amendment. That piece made its rounds through the news cycle into Wednesday morning, when President Donald Trump said in an early-morning tweet that the Second Amendment "WILL NEVER BE REPEALED!" Survivors of the shooting last month at Marjory Stoneman Douglas High School responded to that almost immediately, and this Parkland student's response to Trump's Second Amendment tweet is perfect.

"Maybe if @realDonaldTrump actually came to Parkland to have a conversation with us he would understand that WE DO NOT WANT TO REPEAL THE SECOND AMENDMENT," freshman Lauren Hogg replied in a tweet. "Man, and they say millennials like to complain."

Hogg added in a second tweet, "You literally spend more time about an hour away playing golf at Mar-A-Lago than in the WH. Just drive down sometime! Actually you have a helicopter, just fly down sometime! Let’s talk!"

Trump tweeted the message out around 3 a.m. Wednesday morning, also taking aim at Democrats whom he claimed would love to repeal the right to bear arms.

"We need more Republicans in 2018 and must ALWAYS hold the Supreme Court!" the president tweeted.

“The president and the administration still fully support the Second Amendment,” White House spokeswoman Sarah Huckabee Sanders told reporters during Tuesday's afternoon press briefing. “We think that the focus has to remain on removing weapons from dangerous individuals, not on blocking all Americans from their constitutional rights.”

Hogg, along with other Parkland survivors and advocates, took issue with the president's tweet, since she has been lobbying for common-sense gun reform measures — not a repeal of the Second Amendment.

In fact, The Washington Post reported Monday that the March For Our Lives campaign's five-point policy plan for gun reform is "wholly compatible" with the Second Amendment.

In the replies to the president's tweet, many of his supporters reiterated their support for the Second Amendment and touted their gun ownership — a familiar sidestep to the actual conversation around gun control measures that don't include ripping guns out of people's hands.

Here is what the movement started by Parkland survivors is actually calling for, regardless of Justice Stevens' Times piece:

The call to action on the March For Our Lives website states that more funding is needed for the Centers for Disease Control and Prevention (CDC) to accurately assess the scope of the problem.

The Bureau of Alcohol, Tobacco, Firearms and Explosives (ATF) is a federal law enforcement organization within the U.S. Department of Justice, and Parkland survivors support loosening restrictions on the organization's ability to regulate firearms.

"[ATF] has been operating with one hand tied behind its back — unable to even digitize records of gun sales — or require gun dealers to conduct annual inventory checks to make sure they aren’t missing any guns," per the March For Our Lives site.

Trump doesn't seem to realize that he has espoused one of the Parkland students' five talking points himself: a call for tighter background checks.

The crux of the Parkland survivors' argument, as well as that of many gun reform advocates, is that it is simply too easy to purchase guns in America. The goal in expanding the background check process would be to close loopholes and keep guns out of the wrong hands.

Trump also has agreed with the Parkland survivors' push for banning bump stocks (which, when installed, augment guns to fire more rapidly), but has remained mum on banning assault weapons themselves.

"High-capacity magazines that hold more than 10 rounds serve only one purpose — to allow someone to shoot as many bullets as possible, in the shortest amount of time," per the March For Our Lives site. "These magazines are devastating and need to be banned."

5. Leave the high-powered weapons to the military.

In addition to banning the sale of high-powered weapons that hold more than 10 rounds, the March For Our Lives campaign has pushed for the government to take existing assault rifles off the streets.

"Weapons of war have no place in our communities," said the March For Our Lives mission statement. "Our nation requires a comprehensive assault weapons ban that prohibits the future production and sale of these weapons and provides a solution for dealing with those assault weapons that are already owned, such as a buyback program or registration."

So yeah, when you examine what these young people are really pushing for, it doesn't sound all that unreasonable. They seem more adamant about the government's lack of urgency about the issue than they do about taking your guns, Steve.