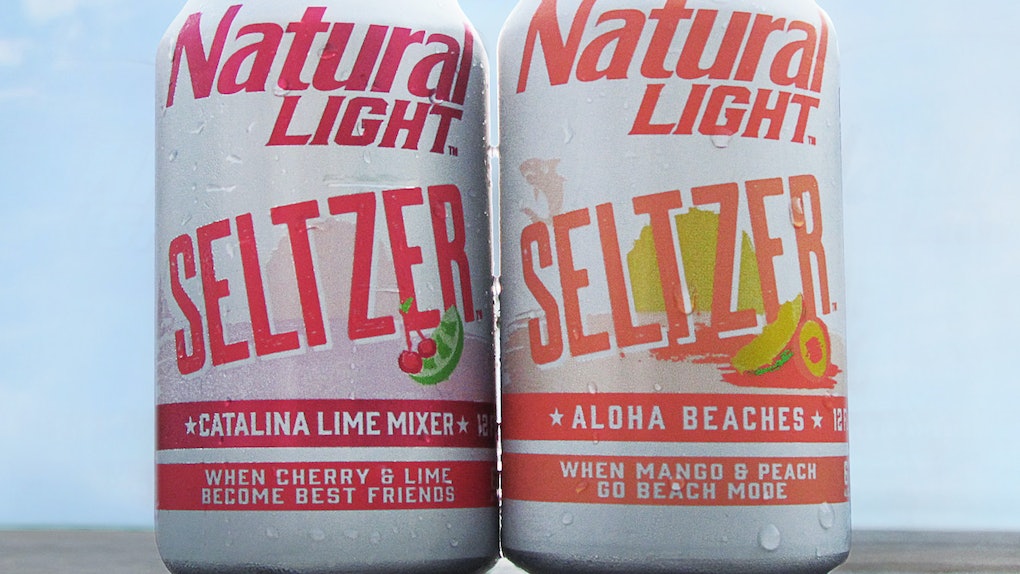 Now that we're well into patio season, I think it's safe to say that hard seltzer has arguably been the buzziest drank of choice for summer 2019. It feels like every brand has their own tasty twist on the trendy beverage, and now, Natural Light is the latest company to jump on board the spiked seltzer bandwagon with what can only be described as summer in a can. This new Natural Light Seltzer includes two tropical-inspired varieties to keep you feeling the beach vibes well into tailgating season, so cheers to that.

In a press release shared on Monday, Aug. 12, Natural Light revealed that it was leaning into the seltzer trend with its own take on the buzz-inducing sips. If you're like me and associate Natty Light with fall mornings spent tailgating football games, you'll be so here for the brand's newest summer-inspired alcoholic offerings that you can enjoy all year round. The end of summer might be a little over a month away, but that doesn't mean that you have to say goodbye to your favorite warm weather flavors when the seasons change.

According to press materials, the new Natural Light Seltzer will come in both a Catalina Lime Mixer flavor (LOL!), which features notes of black cherry and lime, as well as an Aloha Beaches option that tastes like a combination of mangos and peaches. Both of the alcoholic sips will feature a 6% ABV, which is just over the 5% touted by competitors like White Claw and Truly.

Ricardo Marques, Vice President of Core and Value Brands at Anheuser-Busch, said the company decided to try its hand at hard seltzer in light of the tick in popularity of hard seltzers. For context, the sales of alcohol-infused seltzer grew about 169% in 2018 and looks like it's only continuing to increase, according to The Washington Post.

Marques explained, per the press release:

The seltzer category is booming. It's part of a larger shift in consumption across America and we believe it has tremendous staying power. We know plenty of Natty Light drinkers are also trying seltzer, so we want to meet that demand by bringing the fun of Natty into that space with an affordable price offering that fits their lifestyle.

Starting on Monday, Aug. 12, you can head to your nearest grocery store to pick up a case of these beach-inspired sips, which will be sold in packs of a dozen or packs of 24, as well as a stand-alone 25-ounce can, per press materials. For budget-conscious individuals, the fact that you can reportedly expect that dozen to set you back about 20% less than the average 12-pack of hard seltzers is a considerable draw.

You can also try your hand at winning 10 free cases by entering the Natural Light Sweepstakes between 2 a.m. ET on Aug. 13 and 11:59 p.m. ET on Sept. 8. To enter, all you have to do is tweet the hashtags #NattySeltzer and #Sweepstakes, and there's a chance you'll be one of the 100 random winners who'll walk away with five cases of the Catalina Lime Mixer and five cases of the Aloha Beaches flavor delivered straight to your door sometime in September. If you win, you can also choose to substitute your free cases for $250 in the form of a pre-paid card if you happen to live in one of the eligible states, according to the Sweepstakes rules.

There's only about a month or so left to go before tailgating season comes around, so I'd make sure to try these pool-ready sips at your next gathering and see if they're a contender for your new favorite hard seltzer.

More like this
Winc's Summer Water Societé Rosé Subscription Is Back For 2021, So Bring On The Wine
By Cianna Garrison
7 Wine Delivery Gifts To Send For Mother's Day To Make Mom Feel Special
By Marisa Casciano
When Will Cricut's Mug Press Restock? You Don't Have To Wait Any Longer
By Rachel Chapman
Stay up to date