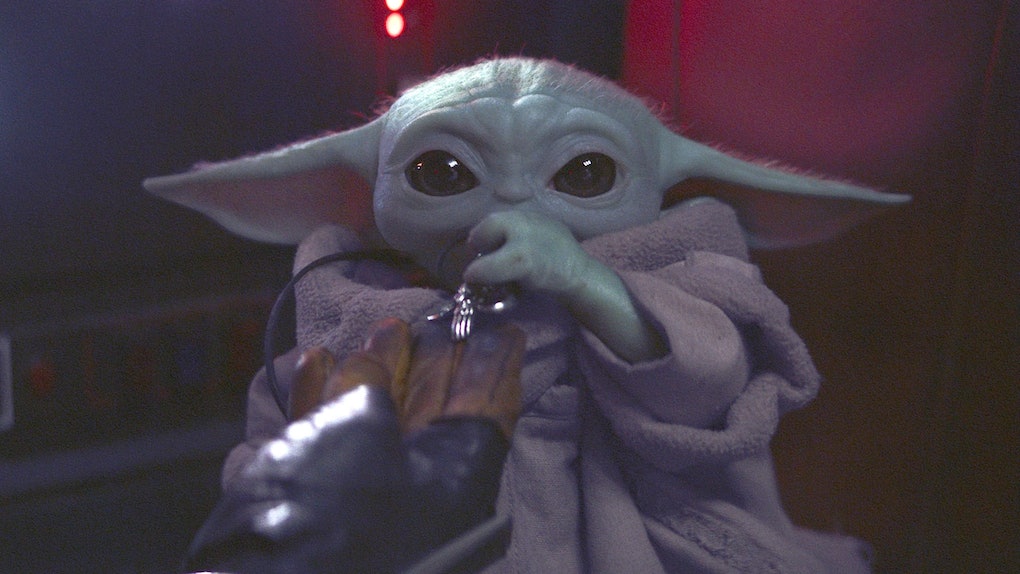 The Mandalorian Season 1 ended with a new mission for protagonists Mando and the Child: find Baby Yoda's home. The unlikely Odd Couple In Space is now a clan of two with a symbol to match. But this Mandalorian theory about the signet suggests this pairing may be far more critical in the grand scheme than just two lonely people finding a family. The series also ended with the reveal of the series' main villain, Moff Gideon. Though at first portrayed as a run of the mill ex-Imperial, the final moments revealed the series antagonist wields the Darksaber

To understand why these two stories are intertwined, one has to go back into the history of the Mandalorians and the Jedi. According to the "Legends" side of Wookieepedia, the wars began in 3976 BBY, nearly 4,000 years before Luke Skywalker took down the first Death Star in Star Wars: A New Hope. Without getting into the weeds, when the people of Mandalore first encountered the Jedi, the abilities of these knights terrified them. During the 16 years known as the “Mandalorian Wars,” the planet put itself through a crash course developing technology that could withstand Jedi attacks and lightsabers, like the beskar metal that makes up their armor. It also led to the Mandalorians as the warriors they are known as today.

Despite this leap in technology on the part of Mandalore, the Jedi won the war. It was an ugly victory, by the time the fighting was over, the defeated planet was only inhabitable within biodomes constructed on the planet’s surface. In short, the Jedi killed the Mandalorian homeworld.

It took two centuries for the Mandalore people to begin recovery. Around this time, Tarre Vizsla, one of the few Force-sensitive Mandalorians, was inducted into the Jedi as a child and became the first of his people to become a full-fledged Jedi Knight. The final stage of becoming a Jedi is forging your own lightsaber. Vizsla took his Mandalorian heritage and mixed it into his Jedi abilities, and created the Darksaber.

But Vizsla was a rarity in attempting to forge these two cultures together. The bad feelings between the Mandalorians and the Jedi have never abated. Even in modern times, members of House Vizsla viewed the Darksaber as a way to get revenge on the Jedi.

So what does that have to do with Mando and Baby Yoda? It means they are enemies in a 4,000-year war, something Mando has slowly realized, but Baby Yoda is far too young to understand. That sounds like a long time, and it is — for human generations. But it’s barely a drop in the bucket for Baby Yoda's people.

The adorable green tyke is 50 human years old, which is about the equivalent of a human toddler. Yoda was 900 years old when he passed. To him, four centuries would mean Yoda’s great-grandfather fought in those wars. To put that in terms humans can understand, that makes the Mandalorian Wars more or less equivalent to the Civil War in our time, close enough that the aftermath is still relevant today, but just out of living memory.

In The Mandalorian’s season finale, the Armorer declares Mando and the Child a clan of two ⁠— former enemies, now family, bound together by a signet they both wear. (Baby Yoda uses it as a teething ring rather than wear it, but you get the point.) But her conversation with Mando shows she knows how radical it is to bind them. She is, in effect, forcing a burying of the hatchet between these cultures. Her decision to do this could be the first step in uniting the people of Mandalore and the Jedi.

The Mandalorian's signet could be a symbol of peace between ancient enemies, and a way forward for his chosen people, who have recently lost what was left of their home planet. It seems like she knows these former enemies need each other since an outside enemy is threatening both the Mandalorians and the Jedi, and wielding the Darksaber. Is this what the Armorer meant to start? Fans will find out when The Mandalorian Season 2 premieres in October of 2020.

This article was originally published on Dec. 31, 2019