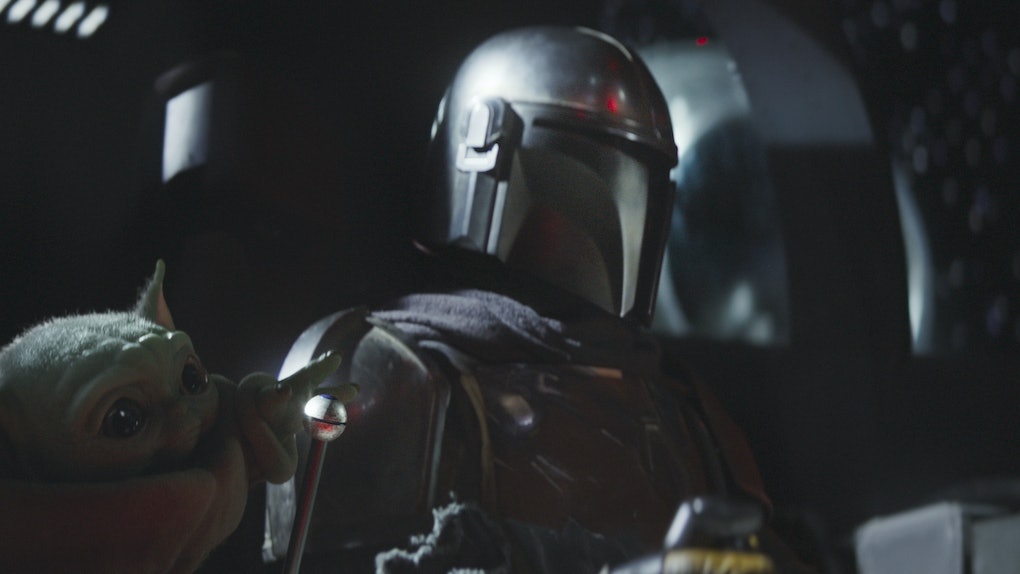 This 'Mandalorian' Theory About Baby Yoda Is So Important

The Mandalorian's third episode, entitled "Chapter 3: The Sin," was a masterclass in action. Director Deborah Chow gave the installment a rip-roaring firefight down the center of town when Mando (as everyone is calling him) goes against the code of the bounty hunter and rescues The Child, Baby Yoda. But what did Mando just do, exactly? It seems the Former Empire people who were looking for the Child meant him great harm. But what exactly was their plan? This Mandalorian theory about Baby Yoda suggests the Empire was attempting something dangerous. Warning: Spoilers for The Mandalorian Season 1 follow.

The first episode of the series threw a lot of information at audiences in a short 37-minute installment. Fans loved the shower of easter eggs, references, and deep cut lore the show brought up. But it seems like at least one of those references wasn't just for viewer enjoyment.

Werner Herzog's character, who hires Mando in the premiere, is referred to only as "The Client." Still, this is a man who was once a high ranking Imperial official, considering the beskar he has to throw around, and the ragtag bodyguards who wear their stormtrooper armor. But it's Doctor Pershing, who joins the negotiations and is very eager to get the quarry alive, who wore the critical markings.

In this headshot of the character, note the symbol on the right shoulder.

This tweet blows up the image and identifies it:

That's the mark known as the Kaminoan Emblem, the symbol of the Kamino people, who specialize in cloning technology. That patch was once a mandatory symbol worn by all clones.

This suggests that either Dr. Pershing is not an original, or he's someone who works in the creation of clones. And that's where The Child comes in.

Baby Yoda already has Force sensitivity and is training themselves to control it, as evidenced in "Chapter 2: The Child." The response to seeing Baby Yoda close suggests highly that Jedi powers are now all but extinct in the galaxy, other than the handful of recruits Luke is working with. The only Force-sensitive beings are on the side of the former Rebellion.

By getting their hands on Baby Yoda, the Empire seems to be trying to even the score. It's not clear what Pershing is doing to Baby Yoda when Mando bursts in and rescues the babe from the operating table. But with the cradle trashed and the Child lying helpless on the table, it didn't look good. Pershing insisted he was doing everything to keep The Child alive, though, which suggests that whatever he's working on, he needs a living base to work from, like anyone who is trying to clone an army.

Creating a small phalanx of adorable green-eared toddlers would be a coup for the former Empire looking to rebuild. (And think of the merchandising opportunities!) It seems that Mando's soft heart may have saved the entire galaxy from an army of Force wielding adorable babies. The question now is if he can keep the Child safe and sound.